It’s not too hard to figure out where a restaurant called Two Spear Street is located. But where exactly is Spear Street? When I plugged the address into my GPS I got an unexpected answer: it mistakenly told me that was the address of Lena’s, a fine Nyack restaurant that closed three years ago.

I found the restaurant, located on a tiny alley-like street near the Nyack waterfront, easily one weeknight evening last week as I joined a companion to dine at Two Spear St. for the first time

The small, elegantly decorated dining room was surprisingly full for a Thursday night. Or maybe not so surprising since it was Hudson Valley Restaurant Week.

The Nyack restaurant offered numerous choices for both lunch and dinner as part of Restaurant Night.

Just about everyone who dined in Two Spear Street the night we were there ordered off the Restaurant Week menu, we were told.

No surprise there: choices were extensive and wonderfully prepared.

As soon as we sat down, Mike, our server, brought us a complimentary bread and cracker basket along with two tapas-like dips. The hummus was mild and could have used a kick or two. But the black olive dip more than made up for that with a sharp, rich flavor.

It was hard to chose from the appetizers. mixed salad? seared tuna? tortilla crusted shrimp?

I was torn between the roasted beet salad or the potato leek soup.

The soup, Mike told me, was very filling. I wanted to try it, but I was afraid of being too full to enjoy my entree.

I went with the beet salad, which was served with goat cheese and a citrus vinaigrette, with slices of mandarin orange and scallions — a tangy mix.

But there was Mike the server, who, without being asked brought us a half-full bowl of the potato leek soup, topped with crunchy onion, to sample. 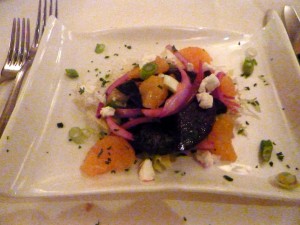 And I’m glad he did. The beet salad was good, but the potato leek soup was better. 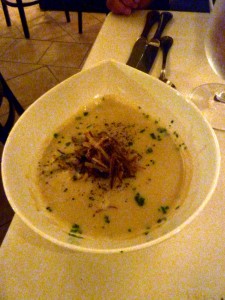 On to the entrees.

I was in the mood for a pan fried veal cop with Sautéed Mushrooms, Spinach, & Gruyere Cheese. 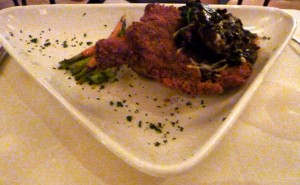 It turned out to be a wonderful choice. The veal chop was huge – so big that it took up most of the triangular plate that it was served on. It came with roasted potatoes along with asparagus (unfortunately, just about the only vegetable I don’t care for) and baby carrots.

The dish was hit the right notes — both crunchy and subtle. After less than half of the chop, I was too full to continue. Mike offered to wrap the rest for me to take home.

When he brought it to me, it was enclosed in a cardboard box shaped like a space-age pocketbook that Jane Jetson might used. I brought it home and my daughter played with it for days, long after the rest of the veal chop was eaten. 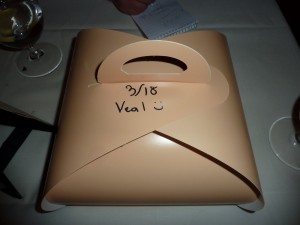 We ended our meal with one order of warm chocolate cake and one order of chocolate chips cheesecake, along with coffee. And there, in the sugar bowl, was evidence of the restaurant that came before Two Spear Street. A sugar packet still had the name Lena’s written on it. 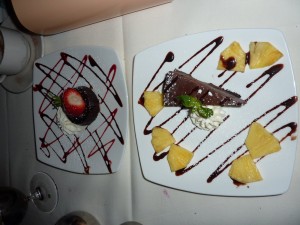 As we were leaving, we were given coupons for a return meal — either brunch, lunch or dinner. Sounds like a great idea.