People are reading
You are at:Home»Food Links We Love»HVRW: Debra West At Sentrista Grill in Brewster

Thursday evening I went for dinner with my husband, Peter, at Sentrista Grill in Southeast. The restaurant is in a cute colonial-style shopping plaza, called Clocktower Commons right off Route 22. Sentrista’s dining room is comfortable and homey and even though it had a good-sized crowd it was quiet enough for an intimate conversation.

We both started with hearty soups. I had a lentil and sausage soup that was really delicious and so filling it was hard to keep going with the rest of the meal, though somehow I managed. Peter’s barley soup was thick and tasty. Then we moved on to the appetizers. I really enjoyed the grilled Romaine lettuce wedge that was topped with applewood bacon and gorgonzola and drizzled with a sherry emulsion: 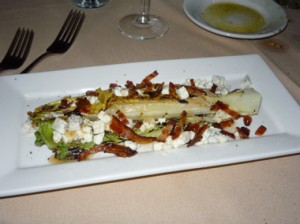 If we were eating off an a la carte menu, we might have called it a meal after the appetizers, it was so filling. But since it was the HVRW menu, we soldiered on and our friendly waitress kept the dishes coming. 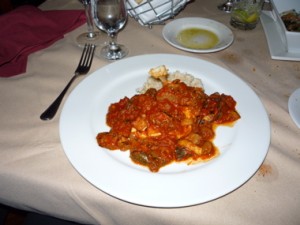 For an entree, Peter chose the Pasta del Stephen, which was made with his favorite pappardelle pasta (a wide fettucine) broccoli rabe and sausage in a sweet veal reduction sauce. He ate every drop, which tells you how good it was. I ended up taking a good bit of my chicken primavera home with me. Since it is finally spring, I was hoping for some fresh, crisp vegetables, but the dish was served with a wintery vegetable ragu instead. (My teenager had no complaints about the doggy bag I brought home.)

The desserts — Tiramisu and Creme Caramel — were yummy, as desserts always are.