People are reading
You are at:Home»Food Links We Love»HVRW: Donna Monaco Olsen Blogs About a Late Lunch on a Warm Day at the Rye Grill & Bar!

Guest blogger Donna Monaco Olsen to tell you about our late lunch at the Rye Grill & Bar. This restaurant is part of a corporation of six restaurants including Morgan’s Fish House also in Rye (which will be going under major renovations soon). They were most accommodating of our late lunch request of 3:30 and will honor the lunch HVRW menu up until 5:00 when they begin the dinner menu. It was an unusually warm March day and some were even brave enough to dine outdoors. Although it is not a picturesque view (Rye train station and commuter lot) the few tables on the porch were filled. I am guessing spring fever has hit by the way the patrons were dressed in shorts and flip-flops. Overall a lovely dining experience was had by our party of four. I recommend that you try this newly renovated restaurant.  That said… 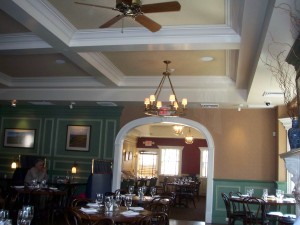 We were seated in a sunny spot in the corner of the cavernous downstairs dining room. The bar area is beautifully done in stained wood paneling and a very quaint fireplace area. The staircase leading to the upstairs dining and private rooms, is most impressive and a beautiful center attraction for the restaurant. The moldings and décor are very colonial and traditional in style and have clean crisp lines in soft colors.  It could use a bit more sound absorbing details as there were only a few of us dining but we could clearly hear the children seated way across the room.  The voices travel and echo considerably in this otherwise lovely establishment and it is sometimes difficult to hear others in your party. 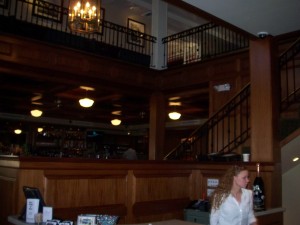 Our servers were very nice and attentive even though we were in at an off hour and they were preparing for a shift change. About twenty or so staff members were folding napkins and cleaning glasses in the adjacent room all while dining on McDonalds (what does that say?). The staff were accommodating in all respects even when we returned two items ordered due to them being overcooked (one salmon and the other a steak). Again, I will give them a pass since it was an odd hour and the kitchen was not probably in full swing yet.  They happily brought out new ones and although the course of events was not ideal they handled it very well.

This restaurant offered three to four choices per course on the HVRW menu and also gave us their regular fare menu to choose from. We all opted for the price fixe menu. For the appetizer most of us ordered the 4-Layer Dip which was the surprise hit of the meal (wishing for some right now). 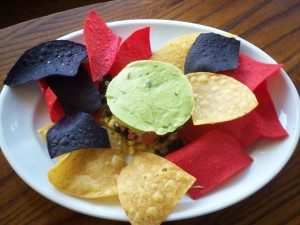 It was a generous portion of HOMEMADE (we asked to confirm as they were very tasty) Tri-Color chips with a napoleon type cylinder tower of fresh cut off the cob roasted corn, black beans, fresh salsa and topped with yummy avocado.

Surprisingly for this bar type atmosphere the soup was grand. The “cup of soup” lobster bisque was not thick or creamy like most places, it was velvety and smooth with large pieces of lobster that were visible and not imaginary or shredded. 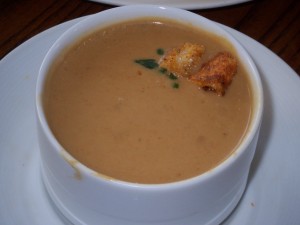 It definitely exceeded expectations as far as soup goes.

Two of our party ordered the Grilled Petite Rib Eye with mashed potatoes and mushroom sauce.  We did not notice the mushrooms but oddly enough my husband said the accompanying vegetables were cooked nicely and he enjoyed them. 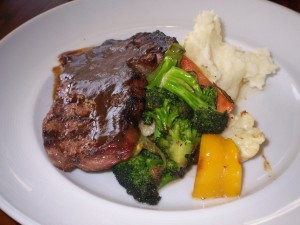 “Odd I say,” not they were cooked correctly but that he noted and ate his vegetables. It was a nice portion and he finished it for dinner the next night (we took a night off from eating out for HVRW).

The Seafood Salad (as it was advertised) was three types of fish on a bed of lettuce with asparagus and tomatoes. Seafood to me is shrimp, scallops, clams, mussels but this was a trio of fish. 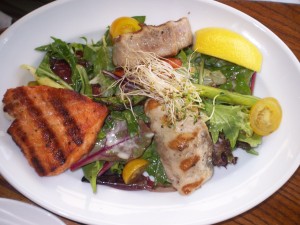 It was sort of reminiscent of the story of the “Three Bears”, Mahi Mahi (under cooked), Salmon (overcooked), and Tuna (just right for the person eating it but overdone by most standards).  Not the best offering but a good attempt.

I had the Grilled Salmon Club which is also a staple of mine at their sister restaurant, Lexington Square Café in Mt. Kisco. The salmon was considerably overcooked and was redone to a lovely moist piece of fish, the bread was burnt but still edible and the bacon lacked flavor (yes-bacon can do that sometimes). 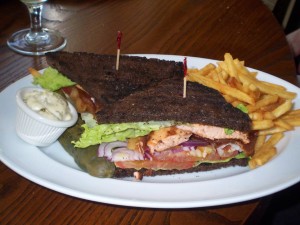 Let’s just say it needed some TLC.  The fries were however crisp as ordered (a rarity for me, usually having to ask again to make them well done to get them hot and crunchy).

Our busboy was especially friendly and told us he had prepped our dessert plates and told us how much he enjoyed working and getting to make the desserts. He was delightful and a true asset. The desserts however were uninspiring. The Brownie Sundae was straight forward and somewhat dry because it was baked in a muffin tin. The Banana Roulade was just okay. We did not even pose them for a photo op.

My suggestion is to go to the Rye Grill & Bar for “bar” food such as wings, a burger or the appetizers and soup which were enticing and tasty. I know I am headed back for the 4-Layer Dip and a few drinks in the near future. I loved the ambiance noisy or not. Beautiful atmosphere and great staff will keep you coming back.

We have gone to many restaurants who have participated in this fabulous program, including; The Cookery, Sweet Grass Grill, X2O, Marc Charles Steak House and we will try a few more before it is over.  Although we are enjoying ourselves trying new places and experiencing various new foods, thankfully it is for only two weeks or we would BURST! Next week our over extended restaurant budget will be spent on new pants for our over extended bellies…Enjoy!