People are reading
You are at:Home»Food Links We Love»HVRW: Karen Croke on Union Restaurant & Bar Latino

Guest blogger Karen Croke reporting in for duty. For some reason, I always seem to be traveling great distances for my Hudson Valley Restaurant meals. Last night, I was on the road again, from Pleasantville all the way to Haverstraw for dinner at Union Restaurant & Bar Latino.

Dining here, whether it’s Restaurant Week or not, is always a pleasure for me. I’m a huge fan of chef David Martinez’ Latin-influenced food, even when it’s tailored to just five choices as it is on his HVRW menu. I also can’t resist the sense of bonhomie provided by maitre d’ and co-owner Paulo Feteira.  He really knows how to run the front of the house. Last night, was no exception. It was packed.

It was also romantically dim inside so my photos aren’t the greatest. Meaning? I can’t show you the huge table of women from Albertus Magnus celebrating a raucous birthday party, or the equally large table of pharmaceutical reps seated nearby getting into the spirit, too. Or Mr. Lang, who was on his way out when we asked about his dinner:  “Perfect,” is what he said. “But, it always is.” Here, at least are my dining companions: My sister Lauren (she’s eating dessert) and Kathy Vulaj, who is from New City. She’s been here before and loves it. 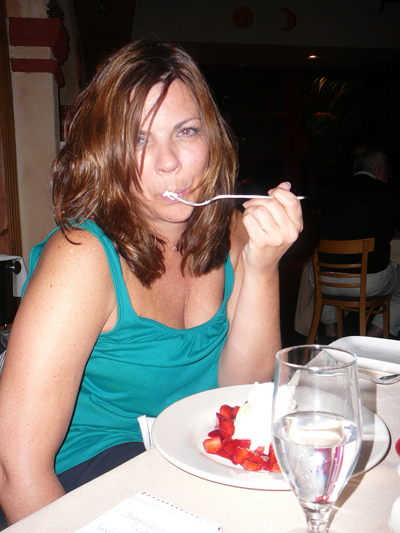 The desserts, by the way, were incredible. Lauren is having the Maracuja Panna Cotta.  Here’s Kathy and the charming Paulo. 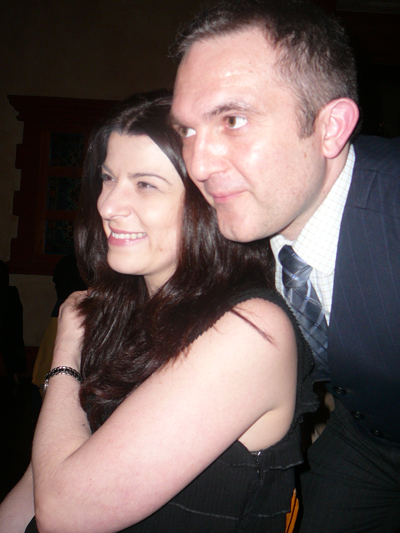 “It’s been a really great week,” Paulo told us. “We’ve had a mix of Restaurant Week diners, who have never been here, and regulars. I’ve seen some people come back twice.” And really, that’s the lure of HVRW, to interest diners in trying out new places. Now, on to the food: For appetizers, we fought over two plump pan-seared diver scallops with intensely flavored carrot-ginger mousseline and pistachio pesto sauce. The scallops were beautifully seared and that mousseline, smooth and  deceptively simple; we hardly had enough bites to get the full build of flavors.

From there, we moved on to Shrimp Frescito, gorgeously plated, which was a 180 from the scallops: the shrimp were poached with chilled lemon grass and then perched on tangy sesame seed noodle salad. Wow! I loved this dish. (And I have no photo, sorry! Then there was this duck confit taco.

For this dish, and honestly, I am not a big fan of duck (which I usually equate with “game”) Martinez offsets the strong flavor of duck with a simple, cool salsa made from corn, lime and roasted peppers, with a shining top note of cilantro. I may be a duck lover afterall.

For dinner, I could not resist a dish made with beer (ask Liz Johnson if I am not a sucker for any dish containing ale). [Edit from Liz: You better believe it!]

The chunks of veal in this stew-like entree were braised in Defiant beer, a local brewery, then simmered with local vegetables and served with Spanish rice. Lauren and Kathy both had this Chuleta de Puerco and they worried it might be too heavy for dinner: 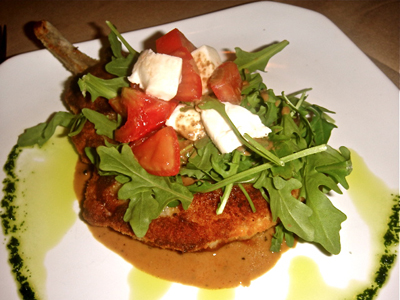 But Martinez pounds the chop, still on the bone, pretty thin, then crusted it in panko and added a nice mini-salad of arugula, tomatoes and fresh mozzarella. There was also a salmon migas with asparagus and mashed potatoes, pan-roasted Hake with steamed yucca and coconut curry (which smelled delish as it passed by our table) and a grilled chicken dish with English peas. For dessert, we ended up with all four choices, including my fave, Union’s signature coconut rice pudding with a creme-brule like crust of caramelized caramel (yummy). Lauren had a passion fruit panna cotta. Take a look: 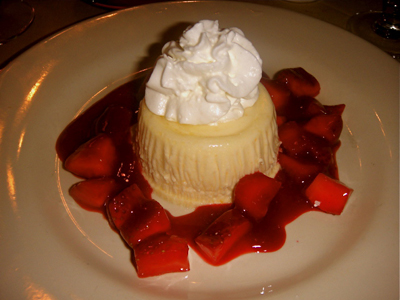 This looks kinda pretty but it was amazing. The strawberry compote you see strewn on the plate was made with strawberry vodka from Me-Oko vodka, made nearby in Garnerville. This totally worked, the panna cotta, again, which I usually find bland, was zippy, yes, I said zippy from the passion fruit flavor and that compote was just soooo good. Kathy had a Cacao brownie, glazed in Coquito ( a coconut rum) which came with pistachio ice cream. Our final dessert was a beautiful — 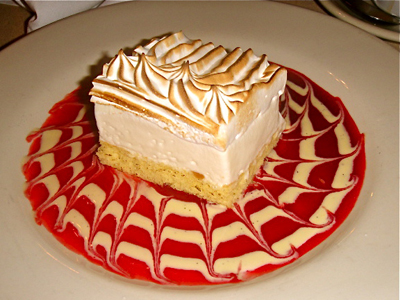 — Baked Alaska, which almost looked too good to eat. Seriously, who wants to mess up those swirls of raspberry? But duty calls, so we dug in. The meringue was incredibly light atop just that thin layer of simple cake (how else could you explain that we ate every last bite?).  As a bonus, Paulo gave us a sneak-peak at his outdoor patio in progress. Now, I can’t wait for summer.

The 411 on Union Restaurant & Bar Latino.