Hello all and happy Tuesday. Sorry for the delay in this week’s links column. This weekend, I cooked a whole mess of pulled pork. Here are five pork shoulders (aka Boston Butt) on the smoker. I picked ’em up from Steve’s Prime Meats in Congers on Saturday morning, and they were out over the hickory from 11 a.m. to about 11 p.m. on Saturday. 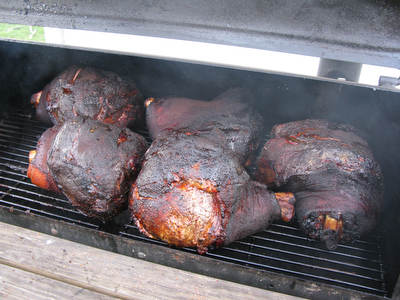 Just before bed, we wrapped them in foil and put them on sheet pans and threw them in the oven at 180 overnight, too. The entire house smelled like barbecue. (It was kind of hard to sleep, I gotta tell you.)

The next day, we separated the bones and the fat from the meat: 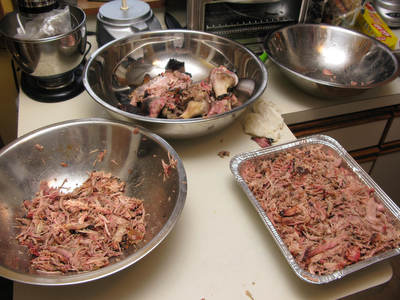 And came away with about 16 pounds of pork. 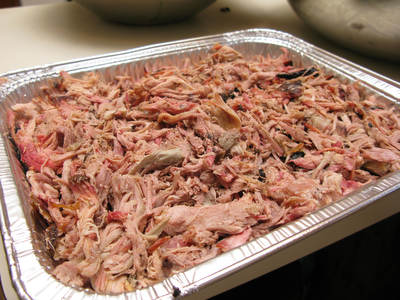 While the pork was on the smoker in the backyard, on Saturday night, we kept with the Southern theme (I’m reading All the Kings Men by Robert Penn Warren, so maybe that’s the influence) and did some fried chicken and greens for supper:

The batter is more Korean than Southern; the ratio of cornstarch to flour was about 1 to 1 1/2. Makes ’em extra crispy. 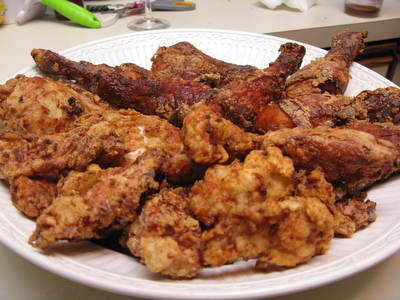 Chard, sauteed with garlic and ginger: 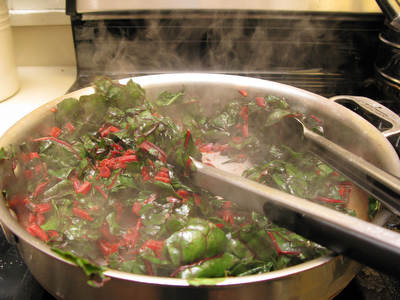 The supper table. The chicken in the middle, the chard to the left, the dipping sauces to the right and the condiments for lettuce wraps up at the top. We served Boston lettuce, cilantro, jicama and pickled radish. 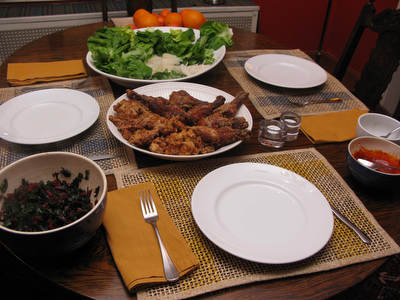 On Sunday, I tested the Easter Pie recipe that’s coming out in Wednesday’s food section. It’s an adaptation of chef David DiBari’s Easter Pie Everyday from the menu at The Cookery in Dobbs Ferry. 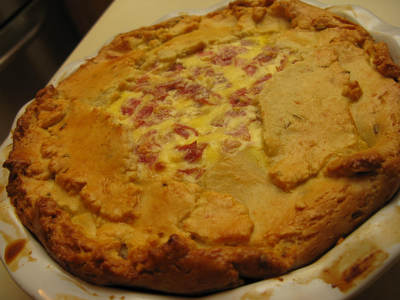 Mine isn’t as pretty as Dave’s, but it sure tastes good. I’ll do a step-by-step post for you later.

Some testy back-and-forth on choices for birthday dinners in Westchester. Ouch! (CH)
Thoughts on Lemon Tree in Dobbs Ferry. (CH)
Wrapping up the HVRW 2010 discussion. (CH)
Sharon is not happy with her HVRW meal at Harvest. (TGL)
She’s not too keen on Iron Horse Grill, either. (TGL)
Doug declares he prefers the New Haven Pepe’s to the Yonkers Pepe’s. (HT)
Julia profiles some great delis. (WM)
MH goes to La Marqueta in Mount Kisco. (NYT)