People are reading
You are at:Home»Food Links We Love»HVRW: Donna Monaco Olsen at Tramonto in Hawthorne

Guest blogger Donna Monaco Olsen is here to tell you about our Friday night dinner at Tramonto. As part of a trio of restaurants including Zuppa and Mima, this one is sure to please. It is located along 9A in Hawthorne. We were greeted by one of the owners.

We joined our friends who were seated in the back room next to a floor to ceiling glass window which enabled us to see the beautiful pines with little white lights that frame the back of the property. The back is a little darker in the lighting but the waiter brought us another tea candle to eat by. It was a nice meal and I recommend you try this restaurant if you have not been in a while. Italian cuisine choices are the specialty of the house. Basically it is a nice place to dine and the movie theatre is up the road a bit if you are not too full to take in a show.

Our server was unassuming and brought us anything we requested. All four of us chose to dine from the HVRW menu. It was nice that the restaurant offered five choices per course as most only offer three.  We tried three of the antipasti offered. Ribolitta Soup which was a vegetable and bean soup reminiscent of a minestrone but without the pasta element: 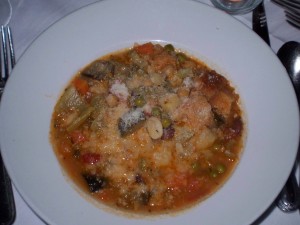 a Lamb Ravioli in basil, cream, asparagus, tomatoes and peas which was not cooked enough for the diner who chose it but he still enjoyed it: 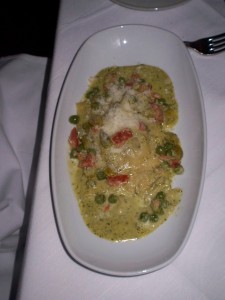 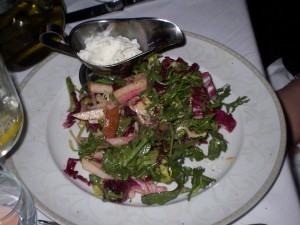 The salad was good but disappointing on the amount of beets or walnuts (in mine only few small pieces) but sometimes this is because they make the two ordered at the table together and they don’t plate equally in ingredients so I will give them a pass on this topic. (Side note: The salad offered at “sister restaurant” Zuppa was amazing although similar in ingredients-escarole in place of frisee was a refreshing and different alternative with a bright lemony vinaigrette).

Two of us chose the fish selection. Unfortunately the substitution that night for the Pink Snapper was Basa (similar to flounder, it is a thin white flesh fish). 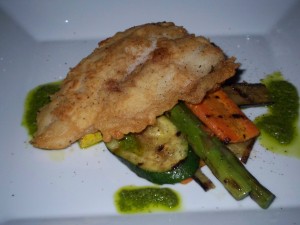 It was simply lightly floured and pan fried served over sautéed veggies without much flavor. It was served with a very tiny amount of almond pesto which was not enough to dress the fish. There was not a starch accompaniment which might have added a bit more flavor to this dish along with some substance. It was served with grilled vegetables which were common and nothing special.

The Pork Osso Buco was a hit for my husband. It was an apple bacon smoke flavored pork shank served on a creamy sweet potato mash that complemented the pork nicely. 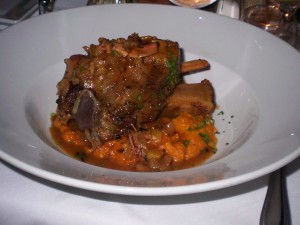 It was billed as having pineapple but maybe it was incorporated into the mash as it was not visible or evident in flavor. The tenderness of the meat was terrific and a perfect hearty offering for this cool night.

The Veal Involtini (grilled rolled-up scallops of veal) was also quite tasty and enjoyed thoroughly by my girlfriend. 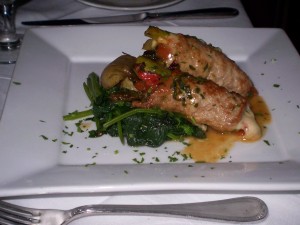 For dessert the Dark Chocolate Brownie served with pistachio ice cream was as expected and nothing out of the ordinary and a bit dry. 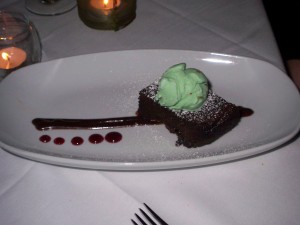 However, the Chocolate Hazelnut Schiuma (mousse textured type of consistency) with candied pecans at the bottom was a hit for two of our diners. 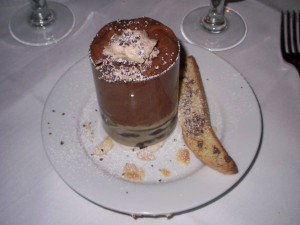 They described it as light and airy and not dense. It was the perfect chocolate ending without being overwhelming.

This was one of our last HVRW visits. We enjoyed reminiscing about all the “dates” and family functions held there in the past. A nice family type of place. If you are in the area give it a try. Mangia!

We can’t wait for next years HVRW to try all the places we did not make it to this time but we did discover some great new one’s to add to our list and some old standbys we had forgotten!