This is Cara Cea guest blogging for Hudson Valley Restaurant Week. The last time I appeared on the Small Bites blog it was with my Ratatouille Pizza in 2007 in the first Locally Grown contest. Getting to know Liz and the gang at the Journal News was a blast, so when the call was put out for guest bloggers, I was eager to sign up. Besides, I couldn’t resist the temptation to have a really good excuse to stuff my face with quality cuisine at a bargain price. 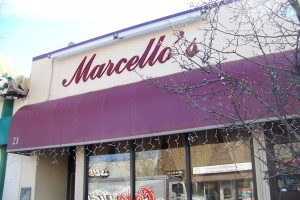 Marcello's on Lafayette in downtown Suffern

I chose to keep it local for me and visit Marcello’s in my community of Suffern. I am President of the Suffern Farmers’ Market and love fresh, locally produced food. Something about the owner, Marcello (no surprise there), and his Italian accent makes me feel like I am in good culinary hands.

We went for a late lunch and missed the crowd so had the restaurant mostly to ourselves. The elegantly dressed and friendly waiters descended upon us immediately with rolls, thin Italian breadsticks, water and beverages. The décor is warm with a hint of Mediterranean flair featuring brightly colored walls and cherry wood furniture. The HVRW menu offered a generous selection of appetizers and main courses with a “combination dessert” for all. The three courses cost $20 for lunch and $28 for dinner as is standard during HVRW. 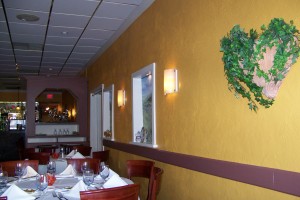 As a kid I was a very picky eater who supposedly ate nothing but yogurt until I was five years old. As an adult, however, I pride myself on trying new foods whenever I can. When I saw sautéed snails on the menu as an appetizer, I couldn’t resist. Yes, they were called snails and not escargot as I would have expected. They were prepared with mushrooms, wine and garlic in a tomato sauce and served with toasted Italian bread. The consistency of the snails reminded me of a cross between clams, calamari and mussels with none of the grittiness or chewiness. In the first bite or two I could barely distinguish the mushrooms from the snails. They were quite enjoyable although the garlic was a bit large and chunky for my taste and I couldn’t taste the wine. But that did not stop me from cleaning my plate. 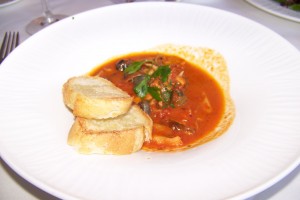 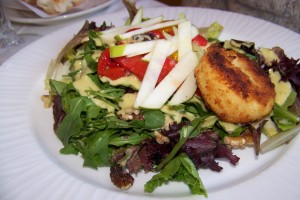 It was Friday during Lent so I went meatless on the entrée and ordered eggplant rollatini filled with ricotta, mushroom, fontina, and parmigiano baked in a light tomato sauce and served over penne which was done to al dente perfection. The rollatini was a risky choice as it is a family favorite but it exceeded expectations. The mushrooms and fontina cheese were a nice addition to the texture and flavor of the filling. I may even try to recreate the recipe at home. 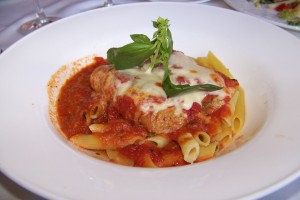 My mom ordered the fresh salmon topped with horseradish crust in a creamy mustard sauce served with creamy mashed potatoes and sautéed green beans. The presentation was delightful with a waffled potato chip sticking up from the mashed potatoes which were not just plopped on the plate but clearly squeezed from some nifty chef’s gadget. The plate looked fancy but fun. The salmon tasted fresh and was moist and cooked to perfection. 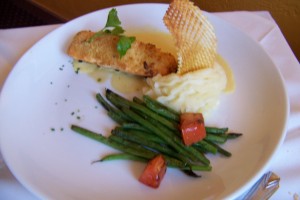 The other three choices on the prix fixe menu were: half roasted chicken with sautéed mushrooms, bacon and peas; “Brasato di Bue al Chianti con Polenta” or braised beef in Chianti wine and vegetable sauce served with polenta; and pan seared grouper over a ragu of chickpeas, sweet peppers, tomatoes and leeks.

For dessert we were treated to a sample plate that included some of the best tiramisu I have had outside New York City with an unmistakable coffee flavor and a vanilla cream sauce drizzled on top with a dusting of coco. Two other sweet treats came with it – vanilla gelato and an Italian vanilla bean panna cotta or custard. 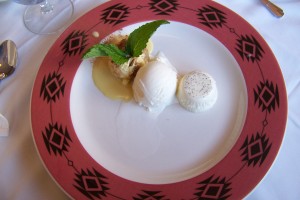 The coffee was bold the way I like it, a sure sign to me of a good restaurant, and the way I like to end a big meal. Liz, count me in for guest blogging next year. This was certainly an enjoyable experience all around. 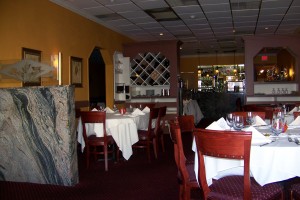