People are reading
You are at:Home»Food Links We Love»Maria Reina visits Roasted Peppers in Mamaroneck on the last night of HVRW

My husband Larry and I, along with our friends Carin and Peter Green, found ourselves pleasantly surprised on Sunday night, the last night of restaurant week, at Roasted Peppers on Mamaroneck Avenue. This restaurant is relatively new on the Westchester dining scene, as it opened only in November 2009.  The two chefs, brothers Juan and Roberto Lepe, blend the cuisine of their Jalisco, Mexico roots along with over 20 years of cooking in New York. 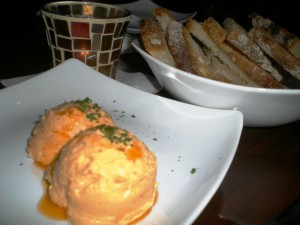 After perusing the drink list we opted for a pitcher of white sangria. We all agreed it was a good choice. It had just the right balance of wine and fruit. Carin tried a roasted pepper margarita that was sweet and spicy (from the pepper infused tequila) and so good she ordered another one later in the meal! With the sangria was an amuse-bouche of spicy hummus. Smooth and mildy spicy, perfect to get our taste-buds going. 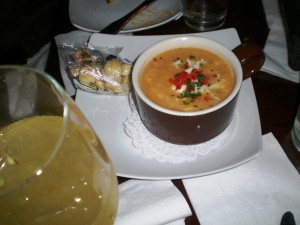 For our appetizers, Carin ordered the roasted pepper and crab chowder. It was full of flavor, with a nice creamy soup base and generous chunks of lump crab. 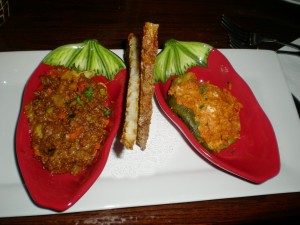 Peter ordered their signature stuffed pepper two ways:  one half picadillo stuffed pepper with ground beef, vegetables and green olives, and the second half stuffed with romesco and goat cheese, served with charred tomato salsa. There was a lot of oohing and aahing from that side of the table!

Our third appetizer was guacamole for two, made to order, and perfect. If you’ve never had freshly made guacamole  tables tableside, you must try it! 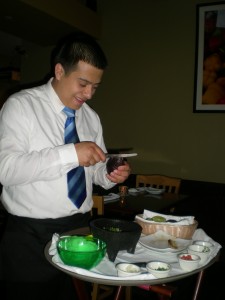 Needless to say, Larry and I were shamelessly scraping the remnants from the molcajete as the waiter was trying to remove it from the table.  Our guacamole wrangler asked us how spicy we wanted it.  We asked for muy picante, but it turned out only picante – though still really good. 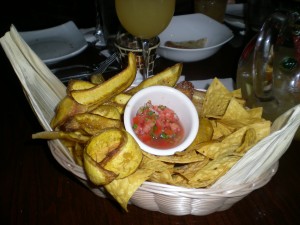 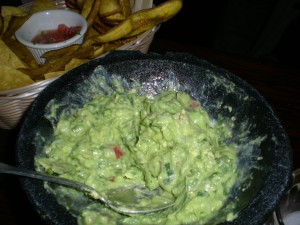 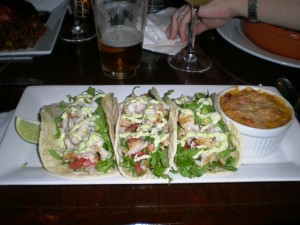 On to dinner: we were very surprised to see the generous portions offered. Any time there is a fish taco offered on a menu, Larry seems to get them.He loved these lime-chili grilled snappers served in a warm corn tortilla with avocado and fresh pico de gallo. Along with the three tacos there was a ramiken of rice and beans. 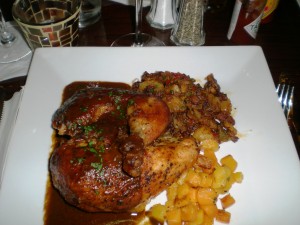 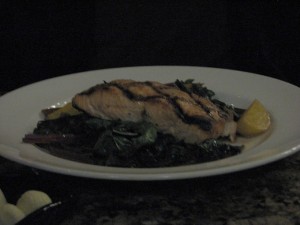 Carin tried the chipotle corn-crusted salmon over chimichurri sauce, which was fabulous. Another generous portion on the plate served with cilantro mashed potatoes and sautéed swiss chard. 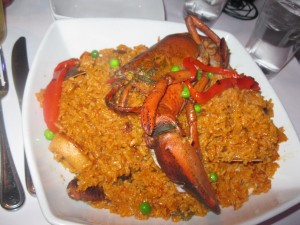 After much deliberation I had opted for the paella, and I was not disappointed! The beautiful clay pot was chock full of shrimp, mussels, clams, lobster, chorizo and chicken. The saffron rice was moist and delicious. There were plenty of veggies in there too, including onions, bell peppers and peas. I had to fight off the spoons that seemed to keep dipping into my bowl.

Collectively we decided that we needed to save room for dessert, so doggie-bags were a must. We shared the three offered on the menu. The clear winner was the jalapeno scented brownie with coconut ice cream. It was rich and chocolatey with a hint of heat. The coconut ice cream was a perfect foil. 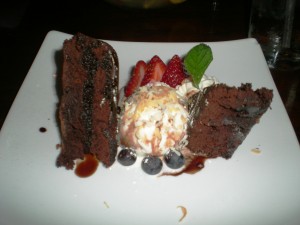 The rice pudding was yummy with a hint of cinnamon, but we all thought it would be over the top if it was warm. The third dessert was also tasty, a bread pudding with raspberry jam. 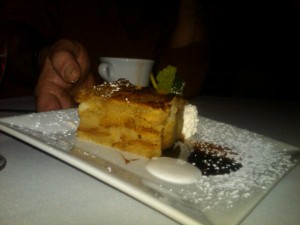 The restaurant itself is very roomy and has a casual atmosphere.  With excellent, friendly service, I can’t suggest this gem enough … we will definitely be back!

The 411 on Roasted Peppers.