People are reading
You are at:Home»Food Links We Love»Mario LaPosta, the Tarry Lodge Pizzaiolo, Is Heading to the World Pizza Championships

Mario Giuseppe LaPosta, the pizzaiolo at the Tarry Lodge in Port Chester, is completely obsessed with pizza. So obsessed that he can’t sleep at night. But you’ll read about that in my story, which I’ll post after the jump. Here’s the online version — with video and photos.

First, the video. Mark Vergari put together this lovely one about Mario, his obsession and how he makes pizza.

Now, the photos. Here’s my trip to Tarry Lodge to report for the story. Mario showed me how he makes his pizzas. Here, he’s cutting one of my favorites, the guiancale with egg and black truffles. Mmm. 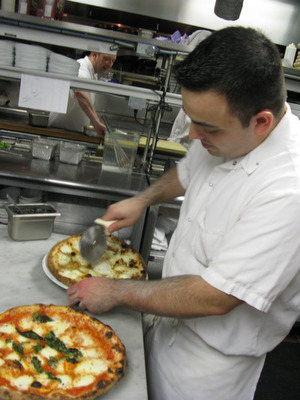 The process starts on this marble slab. 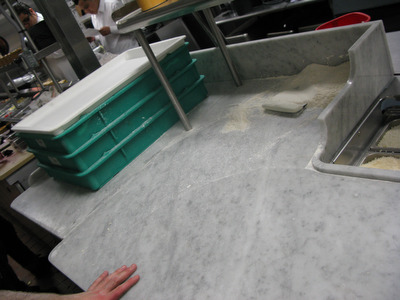 Sauce and cheese for toppings: 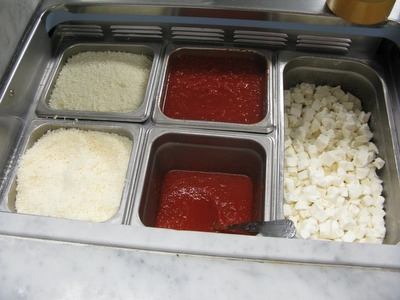 Other toppings at the work station: 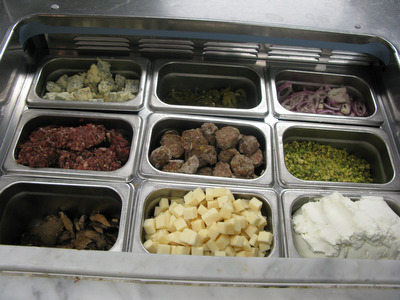 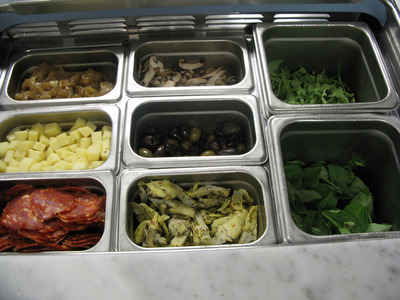 Putting the toppings on his capricciosa: 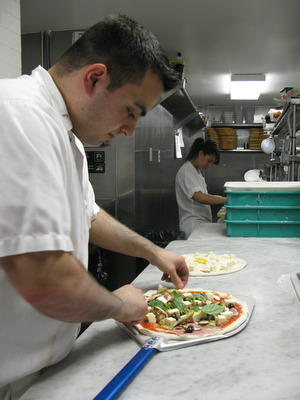 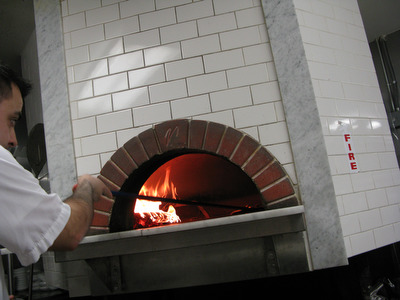 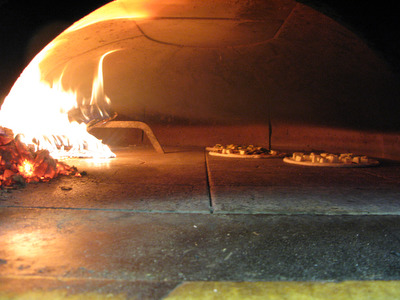 More photos and the full story, after the jump.

Mario is working and worrying the pizzas: 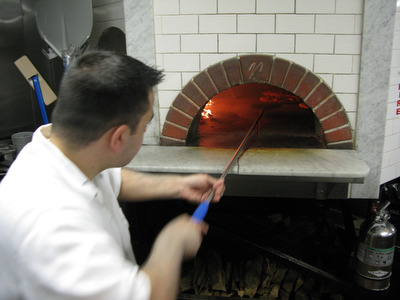 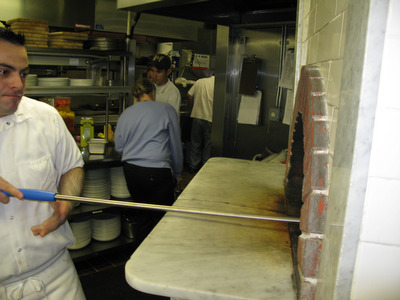 All three pizze are out now: 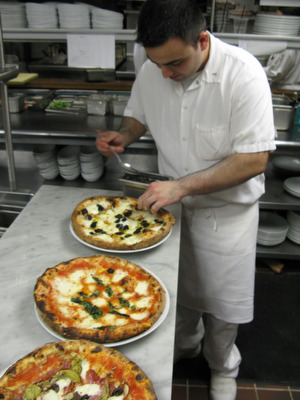 A closeup. Guiancale with egg and black truffles: 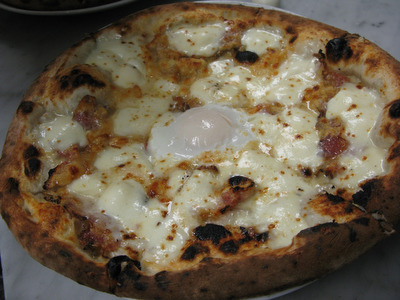 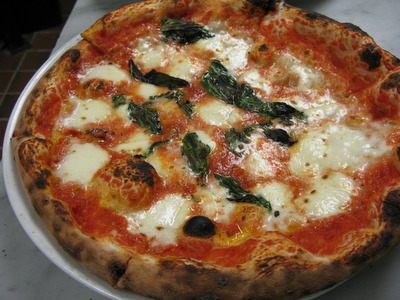 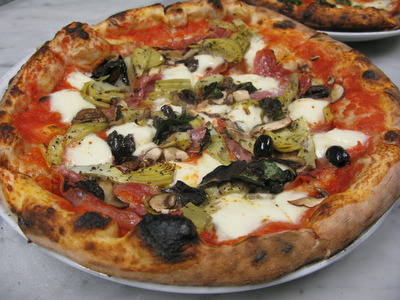 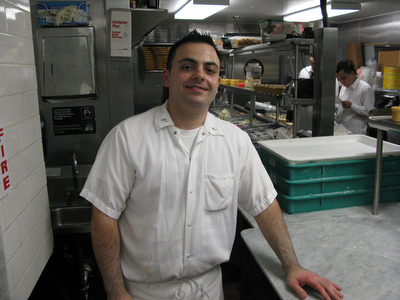 Here’s the story in full:

Pizza is the first thing Mario Giuseppe LaPosta thinks about when he wakes up — and the last thing he thinks about before going to sleep — if he can sleep.

“Is it normal to not be able to sleep at night?” he laughs. “To be thinking about this all the time? It’s a love affair. It’s the love of my life.”

LaPosta is the pizzaiolo (that’s Italian for pizza maker) at Tarry Lodge in Port Chester, where the pizza has never been better. From the sinfully rich guiancale with egg and black truffle to the deceptively simple margherita — Tarry Lodge’s pizza is the stuff of pizza dreams.

But are the pizzas the best in the world?

That’s a question LaPosta hopes to answer with a resounding yes. Next week, he’s heading to Italy to compete in the World Pizza Championships (Campionato Mondiale Della Pizza) in Salsomaggiore, Terme, where he’ll be judged for “overall best pizza” based on taste, presentation and speed.

“I’m very excited and at the same time very nervous,” he says. “I think the expectations are high, but when I get there, reality might set in that I’m not that good. And that’s why I’m going there. To find out.”

It’s a shame he’s not being judged on passion. He’d take first prize in a heartbeat.

Andy Nusser, the chef-owner of Tarry Lodge, says LaPosta is passionate about pizza in a very “Italian way.”

“It can be almost debilitating how passionate he is about it,” laughs Nusser.

LaPosta, who is 26 and lives in Harrison, has been obsessed since he was a child, growing up in Berlin, Conn. Perhaps it started on the family’s yearly trips to Italy, where his father was born, and where he got to use his Italian, in which he’s fluent.

“My whole family used to make fun of me,” he says. “Anywhere I went, I’d always order pizza. That’s all I’d ever eat. Pizza, pizza, pizza. It was my favorite thing in the world.”

So he set about learning how to make it. His very first job was in a local pizzeria during high school, and, during college — he has a degree in hospitality and tourism from Central Connecticut State — he worked for three years at Bricco in West Hartford, Conn., which has a brick oven. (A brother-in-law, Cory Cannon, is the chef de cuisine there.)

Just two months after graduation, he headed to visit family in Calabria, and worked in a pizzeria for a month. When he wasn’t working, he was eating.

“I would sit at the counter and watch these guys make pizza.”

And after a lot of watching, he decided it was time to learn from the masters. His sister lives in Rome, so in March 2008 he moved there.

“It took me about a month to get a job,” he says. “I’d call places and they’d hear my American accent and they’d hang up on me.”

Another brother-in-law, who’s Italian, called instead, pretending he was LaPosta. Finally, LaPosta was hired at La Caletta Fantasie Napoletana in Rome.

“I was a slave — I did anything they told me to,” says LaPosta.

After a couple of months, another family connection helped him move on. An uncle introduced LaPosta to Francesco San Pietro, the pizzaiolo at Pietra di Luna in Piedimonte, a World Championship winner himself.

“We instantly hit it off,” says LaPosta. “This was a Wednesday, and he said if you’re serious, and you want to learn, come back on Saturday night.”

Later, San Pietro told LaPosta that he agreed to take him on — after working solo for 30 years — because of LaPosta’s obvious passion. Still, San Pietro didn’t give away all his secrets.

“He always talked to me, but he never taught me anything,” says LaPosta. “He always said if you want to learn, you have to learn on your own. So I’m just taking in all this information and learning what he has to say. He’s just amazing at what he does.”

And, for two months, LaPosta never made a pizza — except for one, a takeout order, on his last day on the job.

“I was his oven guy,” says LaPosta. “That’s what I did in Italy: I was the oven guy. The pizzaiolo makes all the pizzas, you don’t even get to touch them. You do exactly what he tells you to do.”

Wisdom From A Master

The theory was, if you can’t work the oven, how are you going to learn to make the pizza? They talked a lot about dough, but San Pietro never showed LaPosta how to make it. Instead, he taught him how dough works.

“It changes every single day you make it,” says LaPosta. “It’s the climate, the temperature, the yeast, how much flour is in the dough. That’s the biggest thing I learned, is that it’s not exactly one recipe. He’s been making pizza so long that he knew every single day what he had to do to make it perfect.”

Perfect, to LaPosta, is a silky, fluffy, very soft dough that bakes so that is has a light crust and puffy edges, his goal for the competition.

“That’s what it’s going to come down to — is how good is your dough that day,” he says.

LaPosta and Nusser developed the Tarry Lodge dough recipe together. When LaPosta was ready to return to the U.S. in August 2008, he Googled “wood burning pizza” and found that Nusser and Mario Batali were opening the Tarry Lodge. LaPosta called to inquire about a position. After a few e-mails and texts, he was hired.

“He is fabulous,” says Nusser.

An Oven Of His Own

Tarry Lodge uses the best imported Italian flour — Caputo 000 — and cooks its pizzas at 850 to 900 degrees in a custom-built, $12,000 Mugnaini pizza oven over oak, cherry and beech woods.

On a recent weekday, LaPosta showed off the pizza-making skills he hopes will win him the prize.

He places a round disc of pizza dough down on the marble counter, and presses the edges with the tops of his fingers. The bouncy dough jumps to attention.

He stretches a little more by cupping the side of his palm alongside the edge of the dough. Then he kneads it with his fists, throws it in the air, and gently lays it back down on the marble. He ladles a cup or so of tomato sauce — “just good Italian tomatoes, puree and sea salt, that’s it” — and, using the bottom of the ladle , spreads it in concentric circles.

For the contest, he’s planning to make a margherita, and possibly a capricciosa, which is topped with prosciutto cotto, artichokes, olives and crimini, basil and olive oil. But once he’s in Italy, his game plan might change.

The pizzas, even at Tarry Lodge, don’t always come out exactly the same, and that’s part of the charm.

“Sometimes they’re charred, sometimes the egg is too soft or too hard. You know what?” he says, shrugging. “That’s pizza.”

At the contest, though, he hopes that will be the pizza of his dreams.