People are reading
You are at:Home»Food Links We Love»Sara Moulton at Chef Central in Paramus on April 10

Remember Sara’s Secrets? And Cooking Live? Those shows were the cornerstone of early programming on the Food Network. And Sara Moulton, the host, deserved her fame. 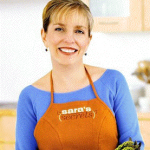 She was executive chef of Gourmet magazine for 23 years, and today she’s the food editor of “Good Morning America.” She knows her stuff.

You can meet her and get signed copies of her new book, “Everyday Family Dinners,” at noon this Saturday at Chef Central in Paramus, N.J. She’ll be doing a cooking demonstration of Polental Lasagna and Warm Chocolate Cheesecake at noon, and then signing books at 1 p.m.

After the jump, a press release about her new book.

One of the hardest-working women in the food business, Sara Moulton has been juggling multiple jobs for years. Admired by millions as the host of “Cooking Live,” “Cooking Live Primetime,” and “Sara’s Secrets,” Sara was one of the Food Network’s defining personalities during the outlet’s first decade. In addition to her work on the Food Network, she was the Executive Chef of Gourmet Magazine for twenty-three years. She is currently the Food Editor of ABC-TV’s “Good Morning America, and much in demand at food festivals and other culinary events across the country.

But Sara is also a wife and mother who knows how challenging it is for home cooks to get delicious, healthful meals on the dinner table. Now, in her third cookbook, SARA MOULTON’S EVERYDAY FAMILY DINNERS (Simon & Schuster; $35.00; April 6, 2010), Sara presents 200 exciting new recipes for overscheduled home cooks who want to treat the family to something new without breaking the bank or spending hours in the kitchen.

“I believe that few things are as beneficial to our health, both body and soul, as a home-cooked meal eaten at the table with family and friends,” writes Moulton in her introduction to SARA MOULTON’S EVERYDAY FAMILY DINNERS. “Most of us tend to make the same ten recipes over and over again,” she continues. “This is boring, and when you’re bored, you’re disinclined to make any dinner at all. Broadly, this book is a compendium of strategies to wriggle free of the strait jacket that stipulates starch/vegetable/protein at every meal.”

Sara has rethought family dinner. In the process, she has developed a number of smart and useful features that streamline meal-making for today’s harried home cook. These include:

• A more time-efficient way to prepare recipes. Rather than the traditional method — prepping all ingredients in advance of cooking — the cook preps some ingredients while others are cooking.

• A vegetarian chapter, as well as a number of vegetarian recipes in other areas of the book (marked with icons for easy reference). Vegetarian entrees are more eco-conscious than meat-based entrees, and also less expensive, which is helpful in the current recession.

• Suggestions about how to make dishes lighter and ideas on which ingredients to swap for ingredients you don’t like or can’t find locally.

• A greater reliance on locally-produced and international ingredients, taking advantage of the increased availability of both in recent years.

• An emphasis on minimally-processed ingredients

• Innovative chapters, including “Appetizers for Dinner,” which elevates tasty starter courses to the main event; “Two for One,” which includes an extra fully-cooked component to refashion into a second meal a day or two later; “Five-Ingredient Mains,” which simplifies meal preparation without sacrificing flavor; and “Whole Grain and Hearty,” which showcases the healthfulness, variety, and flexibility of whole grains.

• Fish recipes calling for sustainable types of fish rather than endangered varieties.

• A “Head Starts” chapter that encourages the home cook to create, from scratch, her own pantry of flavored butters, stocks, salsas, vinaigrettes, tomato sauce, and barbecue sauce.

But it is this book’s fail-safe and flavorful recipes that will make SARA’S EVERYDAY FAMILY DINNERS the volume the family turns to day in and day out. Among Moulton’s favorites are Breakfast for Dinner Pizzas (“Think of this recipe as a natural extension of the potato pizza. Add eggs and bacon and voilà—breakfast pizza”), Pork Sliders, Asian Style, Spring Soup with Bread Dumplings (“I couldn’t believe you could get away with using bread as the batter”), Kielbasa Sandwiches with Kimchi and Cheddar (“…should be a crowd-pleaser not only on a weeknight, but served up to the sports-watching crew on the weekend as well”), Fried Catfish BLTS (“…a sandwich buff enough to kick sand in the face of the skinny little BLT”), Chicken Saltimbocca with Artichoke Sauce, Buttermilk Fried Pork Chops (“…buttermilk, a great tenderizer”), Barbecued Salmon with Picked Cucumbers, Rustic Potato and Greens Pie, Fruit Pot Stickers (“…there’s no law requiring the filling to be savory….”), and Butterscotch Pudding Cakes (“When it’s baked, it separates into a layer of cake and a layer of hot, rich butterscotch pudding sauce.

Embodying all of the qualities that have made Sara one of America’s most admired and trusted chefs, SARA MOULTON’S EVERYDAY FAMILY DINNERS is a delicious and contemporary take on the way we want to cook and eat with our families and friends today.

Sara Moulton was executive chef of Gourmet magazine for twenty-three years. She continues as the food editor of Good Morning America, and in April 2008, Sara launched a new twenty-episode television series for PBS-TV, Sara’s Weeknight Meals.

She is the author of Sara Secrets for Weeknight Meals and Sara Moulton Cooks at Home. She lives in New York City with her husband and two children.