People are reading
You are at:Home»Food Links We Love»Today in the Food Section: Diane Forley’s New Bakery in Scarsdale; Defiant Brewery and Tips for Grilling

Today in the food section, staff writer Linda Lombroso has a great story on Diane Forley and Michael Otsuka, the culinary stars who owned Verbena in Manhattan. They settled in the ‘burbs to raise their children, chose Scarsdale for the school system, and opened a bakery for the family-friendly lifestyle. 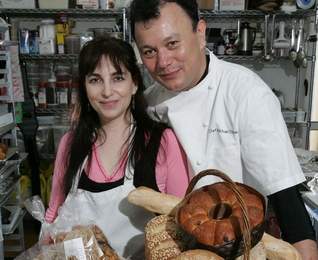 Here’s a link to Linda’s story: Culinary stars find a new following. (I’ll also post it in its entirety after the jump.) I love Tanya Steel’s quote… she really sums up Diane and Verbena with just the right touch:

“She was a true innovator, doing things few had done before, like growing herbs right on the patio of her restaurant and infusing dishes with very light, natural flavors,’’ writes Steel via e-mail. “Her cooking was delicate, nuanced and very fresh and flavorful. It was a new model of cooking.”

And, last week, while I was away, we had these fine food stories:

After the jump, Linda’s story on Flourish Baking Company in Scarsdale.

If you found out two of the country’s top chefs were holed up in a Scarsdale kitchen, churning out gloriously inventive baked goods, would you stop by for a taste?

Diane Forley and Michael Otsuka hope the answer is yes.

Since October, the married couple have operated Flourish Baking Company, where they produce everything from vegetable pies and artisan breads to cookies, fruit bars, soups, savory muffins, flatbreads and focaccia. Their kitchen, which they share with a kosher caterer, is tucked into the rear of a building on a steep hill dotted with auto-repair shops — hardly a place known for its foot traffic.

But ever since Forley and Otsuka started selling their products — which are both kosher and organic — at the Mamaroneck indoor farmers market, word of mouth has led customers to the Flourish headquarters, where the couple do everything themselves.

“Michael and I are the four hands to the business,’’ says Forley, a soft-spoken counterpoint to the more gregarious Otsuka.

Yet both have a breezy approachability that belies their culinary pedigrees.

Otsuka, a California native, trained in Los Angeles and Paris. He’s been executive chef at numerous restaurants, including Thalia, in Manhattan.

Forley, who grew up in Rockville Centre, on Long Island, was so enthusiastic about cooking as a teenager that she telephoned Michel Fitoussi, executive chef at the Palace restaurant in Manhattan, and asked if she could volunteer in his kitchen. (He said yes.)

After graduating from Brown University, Forley went back to Fitoussi, who put her to work immediately.

“He basically threw me right on the line, which I don’t think anyone did,’’ she says. “Usually you start in the salad station, especially if you’re a girl.”

Forley worked as a pastry chef at Gotham Bar and Grill, but she is best known as the chef-proprietor of Verbena, a Manhattan restaurant she ran from 1994 to 2003, when a rent increase forced its doors to close. In 2002, she came out with “The Anatomy of a Dish,’’ a cookbook that includes recipes she developed at Verbena.

Tanya Steel, editor in chief at Epicurious.com, recalls Forley as one of the handful of women at the helm of a major restaurant at the time.

“She was a true innovator, doing things few had done before, like growing herbs right on the patio of her restaurant and infusing dishes with very light, natural flavors,’’ writes Steel via e-mail. “Her cooking was delicate, nuanced and very fresh and flavorful. It was a new model of cooking.”

In 2003, Forley and Otsuka moved to California, where he was executive chef at the Ojai Valley Inn and Spa. Later, he took a position at the Lark Creek Inn in San Francisco, where Forley worked as a culinary consultant. They moved back to New York in 2007, when Otsuka became the executive chef for Goldman Sachs.

When it came time for a new venture, Forley and Otsuka picked Scarsdale (for its school system) and rented space in the kitchen used by Avril Kaye Caterers.

Otsuka had never baked bread before, but he is happily expanding his repertoire at Flourish, where his day begins at 4 a.m. Breads, made with organic grains, include a semolina olive-oil baguette, a Russian rye hearth loaf with caraway seeds and a challah filled with chocolate.

Forley, who starts later in the morning — so she can take the kids to school — began experimenting at Flourish with vegetable pies and savory muffins, test-marketing her products at the farmers market to see what customers liked best.

Aside from her sense of calm, it is Forley’s intuitive understanding of flavors that makes her such a force in the kitchen, says Otsuka.

Amanda Freitag, executive chef at The Harrison in TriBeCa, cooked under Forley at Verbena.

“She was one of my greatest mentors, and her food, still today, influences the way I cook,” says Freitag, a judge on Food Network’s “Chopped” and a recent competitor on “The Next Iron Chef.” “She’s a master of gastronomy. She knows so much about so many different kinds of food, and the theory of food, and the science of food, and how to put flavors together and make it all look beautiful.”

“When she first conceptualized the pies, which is the raison d’etre of our company, it was more of just a thought process, and the first prototypes were nothing like we’re doing now,” he says.

Her asparagus goat-cheese muffins, adds Otsuka, are “off the charts.”

Both say the menu at Flourish is constantly growing.

“We didn’t even think of making soup, and one day six months in, I made a batch of soup because she had all these vegetables and I said it would all go to waste,’’ says Otsuka.

Although customers have been enthusiastic about Forley and Otsuka’s products, they are often surprised when they arrive at Flourish to pick up an order.

“Quite often, people are taken off guard because they’re looking for a bakery or a different experience,” says Otsuka — and, as if on cue, a woman wanders into the kitchen, a confused expression on her face. She’d heard about Flourish, she says, looking around at the sinks and ovens and racks of cooking equipment.

Otsuka assures her she’s in the right place, then rips open bags of flatbreads and vegetable chips, urging her to have a taste. Within minutes, he’s explained the philosophy of the company, assured her his bread stays fresh in the fridge for up to two weeks, and sold his newest customer a challah and a bag of parmesan black pepper whole-grain crackers.

So what if the cash register is an envelope?

“Chefs are generally reclusive people,’’ says Otsuka, after the woman has left the kitchen.

But getting customers inside the kitchen is part of spreading the word, they say. And working side by side has brought Otsuka and Forley back to doing what they like best: inventing dishes in an empty space with nobody to answer to but each other.

“This is actually really fun,” says Forley. “I started cooking as my hobby, and then you kind of lose touch with it the further up you go.”

Forley knows that some people wonder what she’s doing on a hilly side street in Scarsdale, light years away from the bustling Manhattan restaurant scene. But there’s a time and place for everything, especially when there are children.

“This has been a wonderful experience to get my hands back in,’’ she says. “Really, the only way you can create flavors and dishes is by doing it yourself.”