People are reading
You are at:Home»Restaurants»Chef of the Future: Anthony Goncalves of White Plains? So Says Time Magazine

Josh Ozersky, who has always been a big fan of Anthony Goncalves, features him in his latest Time magazine column, “Chefs of the Future, Part II: Room at the Inn.” 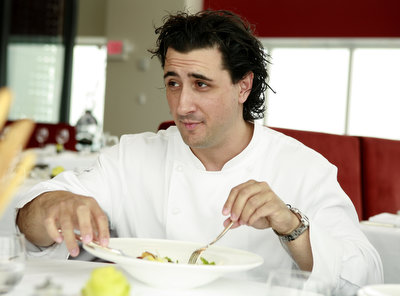 Josh makes the argument that any restaurant worth its salt that opened in the last year is in a hotel, because young chefs simply don’t have the capital to open important restaurants. He says:

So how does a young chef in a mid-sized city get to open a great restaurant?

The answer is obvious: he has to find a hotel or condo partner. That’s how Anthony Goncalves came to have his own 210-seat restaurant, 42 in White Plains, N.Y., by the age of 37. Goncalves, who was short on experience and long on talent and hustle, bypassed the usual path of unpaid potato peeler rising up through the ranks. He didn’t even go to cooking school. Today, his 27,000 square-foot restaurant sits atop the tallest building between Boston and New York, and its six dining rooms serve his sui generis brand of cookery (think clams and house-made chorizo in vino verde sauce with spiced caviar) to an enamored clientele of local grandees. The fact that the chef has perfected the “bad boy” look doesn’t hurt. The ladies are smitten with his wavy black hair and the flirtatious twinkle in his eye, and the men see him as a guy’s guy, a local product who shares their worldview and would never intimidate them with prissy haute cuisine.

Again,  here’s the link to the piece.