People are reading
You are at:Home»Food Links We Love»Watch Chef Christian Petroni on Chopped Tomorrow

Chef Christian Petroni — formerly of Peniche in White Plains, now at Barcelona in Greenwich — is going to be on Chopped, the cooking competition show on the Food Network, tomorrow. Here’s Christian, right, with chef Anthony Goncalves: 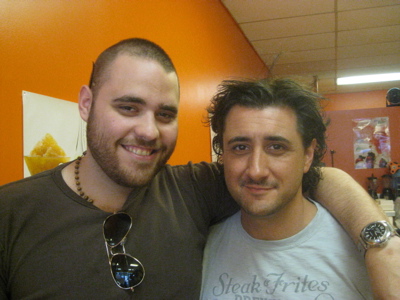 After the jump, a press release.

Previously:
Chef Christian Petroni going to Barcelona in Greenwich.
A trip to Juicy Sushi with Christian
Christian’s take on Spanish cocas.
A trip to Tia Pol with Christian.
One of many meals at Peniche.

Catch the season premiere of Food Network’s hit show Chopped on Tuesday, May 4th at 10:00pm (ET/PT) and watch as our own Christian Petroni, Executive Chef and General Manager of Barcelona Wine Bar and Restaurant of Greenwich, CT (www.barcelonawinebar.com) goes head-to-head with his competitors for a chance to win $10,000.

Chef Petroni began his career as a DJ at Trotters Tavern in White Plains, NY under the direction of his friend and mentor Anthony Goncalves. Upon graduation from the New York Restaurant School, Petroni worked the line at Marriot Hotels. When Goncalves reconceived Trotters, he contacted Petroni to work with him in the kitchen. Petroni oversaw the kitchen and worked his way from expedition to sous chef. Petroni then moved on to Peniche Tapas Restaurant in White Plains, NY with his friend Goncalves where he oversaw the kitchen and continued to explore Spanish and Portuguese-inspired tapas utilizing local and organic ingredients. Now garnering rave reviews for his inspired menu at Barcelona, from critics and consumers alike, Petroni continues to raise the bar of the area’s food scene.

Barcelona invites fans of the show and fans of Chef Petroni to stop in on Tuesday, May 4th, at Barcelona Greenwich (18 West Putnam Avenue) to enjoy wine and tapas and join the Barcelona team in rooting on Chef Christian Petroni as he shows America his culinary prowess.