People are reading
You are at:Home»Food Links We Love»The First Ethiopian Restaurant in the Region: Lalibela in Mount Kisco

Lalibela opened a little less than two weeks ago on South Moger Avenue in Mount Kisco. (If you’re familiar with the area, it’s next to the Jamaican restaurant and across from Okinawa.) Last week, I met with owner Selamawit Tesfaye to learn more about the cuisine, and why she decided to bring it to Westchester.

First up, a video, which explains some of the unfamiliar aspects of the cuisine. (No cutlery; communal eating; different spices). Have a look:

After the jump, a story about Selamawit — 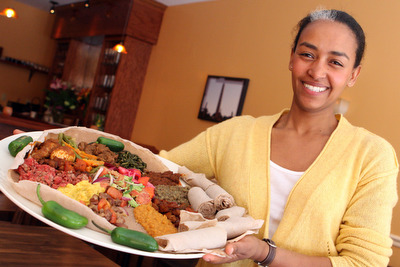 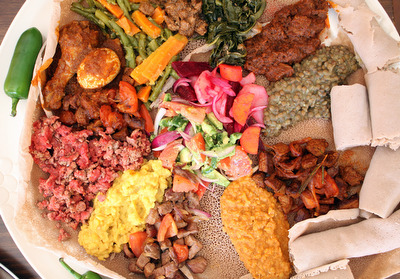 — and why you either love it or you hate it.

All these lovely photos and the terrific video are by Tania Savayan.

The 411 on Lalibela is coming soon. Til then: Lalibela Ethiopian Restaurant, 37 S. Moger Ave., Mount Kisco. 914-864-1343. lalibelamountkisco.com. Open for lunch and dinner daily.

With spicy stews that tingle your tongue, tangy bread that tickles your taste buds, and refreshing salads and salsas that liven the plate with a big splash of color, a meal at the new Lalibela restaurant in Mount Kisco is a celebration of the senses.

It is the first Ethiopian restaurant in the region, and it opened on South Moger Avenue last week 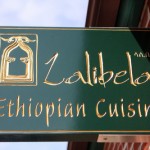 Selamawit Tesfaye, the owner, says opening the restaurant is something she’s wanted to do for a long time.

“I got the chance to come here,” she says. “And where better than in America to make your dreams come true?”

She may well be right, but her first challenge will be getting Americans to understand a cuisine that’s little known in this region. There are a number of Ethiopian restaurants in the Washington, D.C., area, but in New York there are only a handful. 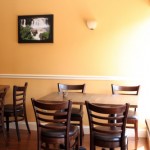 “(Ethiopian cuisine) hasn’t caught on (in New York) and I don’t see it as a great big trend,” says Bret Thorn, food editor of Nation’s Restaurant News, a trade publication. “But I think in general Americans are a lot more experimental now than they were 10 or 15 years ago. That means that different concepts have more of a chance than they would have earlier.” 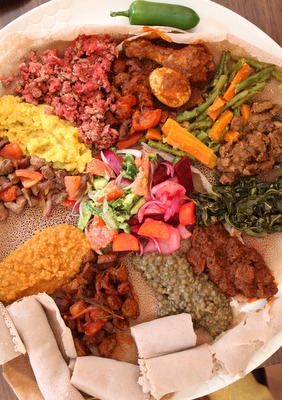 The first custom: No cutlery. No forks, no knives, no spoons. Instead, food is served on top of a giant crepe-like, fermented bread called injera. You tear off small pieces of the bread, then use them to pick up your food.

The second custom: Communal eating. Like in Indian and Asian restaurants, you and your tablemates will choose a few dishes, then all of them will be served on one big platter.

The foods are familiar — beef, chicken, lamb and vegetables are on the menu — but some of the spices are indigenous to Africa. Ethiopian cuisine is known for two spice mixtures: berbere, which is made with ginger, garlic, cloves, coriander, allspice, rue berries, ajwain black peppercorns and salt; and mitmita, which is made with African birdseye chilis, garlic, cardamom, cloves and salt. Neither is burning hot — they just give you a sense of spice and depth.

It’s these spices — coupled with the sour flavor and spongy texture of the bread, and the sometimes unappealing color of the stews — that makes Ethiopian cuisine polarizing, says Thorn. You either love it or you hate it.

“They use clarified butter and make a lot of rich stews that are similar to the way curries are made,” he says. “But the tastes are even less familiar than Indian food. It doesn’t have that cumin-curry flavor.”

It may not be familiar, but — from the one meal I had there — it is very tasty. Nunu Wegbezaw, the chef, cooked at The Ethiopian Restaurant in Manhattan. On her menu are wats (pronounced wets), which are like stews, made of beef, lentils and peas. They are spiced with berbere. The signature dish is called Doro Wat, and it’s chicken legs cooked with onion, ginger, garlic, butter and berbere spice. It’s served with a hard-boiled egg.

There are also kitfo dishes, which are more like the Thai dish of larb: chopped meat sauteed with spices, usually the mitmita blend. The menu also has several salads: the avocado with onion and tomato is like a terrific Mexican salsa, all zippy and fresh with citrus.

Tesfaye came here when she was 15. She followed her sister, Yodit Tesfaye Walker, who came by herself at age 17.

“When they get a visa to go to America, it’s like, OK, we have to make it happen,” says Selamawit. So the Tesfaye family contacted a neighbor’s daughter who was a nanny for a family in Elmsford, and asked if Yodit could stay there while she got settled. The family generously agreed. 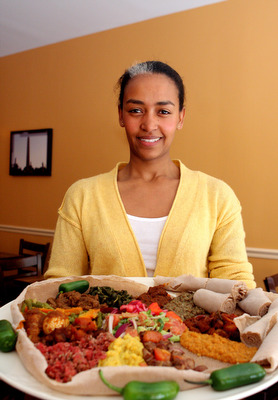 Yodit went on to become a graphic designer. Selamawit ended up working design, too, but at Kohl’s department store from 2006 to 2010. She did graphics and set up displays before she moved on to work in bookkeeping.

At the same time, she was also working at Crabtree’s Kittle House in Chappaqua. She was bartender, waitress,  hostess and then was promoted to maitre d’ for parties.

“She’s a lovely person, an elegant and wonderful lady,” says John Crabtree, the owner. “She really understands the principle of hospitality. It just comes naturally to her.” 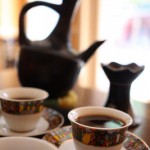 Tesfaye has painted Lalibela a golden color, and set up simple wooden tables. She decorated the walls with a few photos of Ethiopia, including one of Lalibela, the holy city the restaurant is named for.

“I just like the name and the place,” she says. And the word is simple to say, she says, and easy to understand.

And, after one visit to the restaurant, the customs of Ethiopian cuisine will be, too.