People are reading
You are at:Home»Food Links We Love»Tarry Lodge Pizzaiolo and the World Pizza Championships

A few weeks back, I profiled Mario LaPosta, the pizzaiolo of Tarry Lodge in Port Chester, as he was heading off to the World Pizza Championships in Italy. Here’s a link to the Mario story. Below, a video of Mario by Mark Vergari.

Now, Mario is back. And, as he promised, he’s blogged about his experiences at the competition. Read his story, and see some of his photos, after the jump.

Let me start by saying Italy is the most amazing country.

The town of Salsomaggiore Terme, just outside of Parma, where the competition was held, was beautiful. It was a quiet little quaint Northern Italian town with all of the prosciutto di parma and parmiggiano reggiano one person could ask for, an absolute treat.

My adventure this time for the World Pizza Championships was more than I had hoped for. I began my trip shopping in some different markets throughout Rome. The following day I headed south to the Province of Caserta to stay with my mentor for 3 days.

During this time I made practice dough and played with the ingredients on the pizza I would be making. I also found time to visit Naples, which is beautiful.

However, I think I chose the wrong places to eat. Stay away from the tourist restaurants if you ever go. So the day before the competition finally arrived, and the plan was to make the dough that night and drive north throughout the night, therefore the dough would be as fresh as possible.

So we drove through the night Sunday into Monday morning and arrived at the competition around 9:30. I cannot tell you the nervousness and excitement and anxiety I was feeling, the pressure was one of the most intense feelings I have ever had. So you arrive at the competition and wait in line to get a number and find out when you are going.

I drew number 35. So i knew I would be going around 12 or 12 30 Monday. The way the competition is set up, there is a row of 4 wood burning ovens and then 4 electric, and each oven is set up with a work station. So 12 30 came around and they called my number, I was so nervous, I enetered the work station surrounded by some of the best pizzaiolos in the world, former world champions. 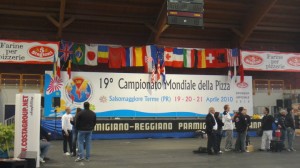 However they were not my competition, they were the jury of the ovens, a.k.a the pizza mafia as I called them. They gaurded the ovens making sure they were up to par, and watch closely how each pizzaiolo works, then give points.

Here I am getting ready, setting everything up, I immediately ask the judge to please put more wood in my oven to get it going. Then I asked him if I could make two focaccias. 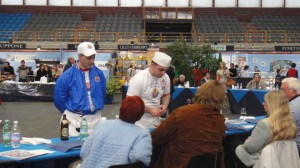 I knew I could make one, but  asked him about two because I saw someone else do it and I had two doughs. He said yes, so I thought. So I went ahead and made two foccacias, and a minute later as I was cooking them he asked me what I was doing. He said “I never told you you could make two, throw them out immdiately!” Here I am thinking “uh-oh!” 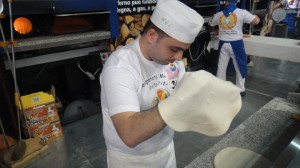 I continued working and began making pizza, I took about 10 mintues to make the pizza, way too long I believe after seeing my point total.

Then I asked him to coninue putting more wood in the oven because I knew it was only at about 700 degrees, very cold for a wood-fired oven.

He told me he could not because it was going to be too hot for the next competitor and he had to regulate it, this I was not happy with it. So here is my pizza with stracchino, mozzarella di bufala, sausage, trumpet mushrooms, peperoncini, ramps, basil and parmiggiano going into the oven. As soon as i put it in I knew my oven was ice cold but there was nothing I could do, it was probably my fault considering I took ten mintues to make  one pizza. 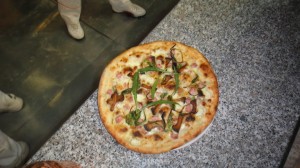 I cooked it as fast as I could as the judge of the oven stood right next to me watching my every move and asking me questions about how i was cooking it. I was very disgruntled because the pizza just was not cooking, about 5 mintues later my pizza came out of the oven dry, and I was dissapointed, but the pizza in my opinion was absolutely beautiful anyways.

I finished it with some fresh wild arugula and then was escorted to the judges table about 100 feet away all the while being stopped 5 or 6 times to take pictures, this is normal.

Then I presented the pizza to a table of four judges where they asked me a series of question about my pizza such as the ingredients and the dough. Then I cut 4 slices at another table — making sure I picked the four best — and brought them to the judges. And then that’s it.

Uou walk away with a thousand different thoughts going on in your head about what just happened. Someone can spend a lifetime telling you about the competition and it wouldnt mean anything because when you experience it yourself its a whole different world.

So for any aspiring pizzaiolos I suggest once you feel you’re ready — go to this event at least once in your life. But like I said the most amazing and most difficult experience of my life, and I cant wait to go back.

My main goal in life right now is to win that thing some day and to make Tarry Lodge pizza better than it ever was, and to get better each and every day.

The winning pizzaiolo was from Padua, and he made  a pizza with cream of zucchine and salmon, shrimp, a cured salted fish from Venice, and a mousse of riccota di bufala. It sounds amazing. Seeing what the competitors do there is much more that goes into it than just making pizza, such as presentation. One competitor made a lifesize portrait of Elvis on a motorcylce out of bread dough — pretty amazing.

Therefore, I knew right away I did not win. I was disspointed because I would say that the pizza was about 65 percent out of a possible 100 percent. and the main reason for this was how long I took to make the pizza (way too long), my oven and all the little factors that someone cannot account for unless they have done the event previously. Experience is so important.

The winner scored a total of 824 points and i scored 578. The judges rank only the top 3, so i would guess that this was somewhere around 100th out of 250-300 pizzaiolos. Not where I wanted to be, but I could not be prouder of how I handled myself and the experience that I just went through because I know I gave it my all.

Like I said, I cannot put into words how difficult this competiton is. However, now that I have year one out of the way, I’m confident that next year I will be ready to compete at a much higher level.

I cannot wait until that day comes next April.