Good morning and happy Monday! Boy is it blustery out there. I spent most of the weekend inside — on Saturday because I was cooking all day (happily!) and on Sunday because I was doing chores: the dreaded Switching Out the Closet chore. Hopefully I didn’t put away all my wool sweaters too early.

Luckily we didn’t lose any plants to frost last night. Did any of you? I was careful to bring in the plants I bought at the Nyack Garden Club Plant Sale — since those were not in the ground yet, I thought they might be more susceptible. Especially the fig tree (!) I got from Bumps & Co., the grower in West Nyack.

So as I mentioned, I spent most of the day Saturday cooking, because we celebrated Mother’s Day on Saturday night with my parents and my grandmother. My grandmother is from Texas, so one of her favorite dishes is pimento cheese. I made it for her: 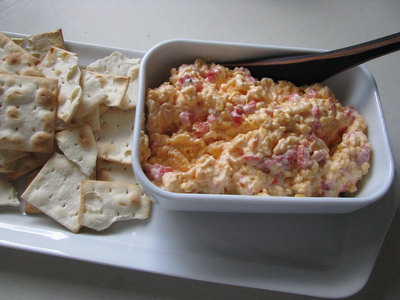 I’ve been noticing a lot more Southern influence on food lately, how about you all?

Another of my grandmother’s favorite dishes is shrimp cocktail. So, natch: 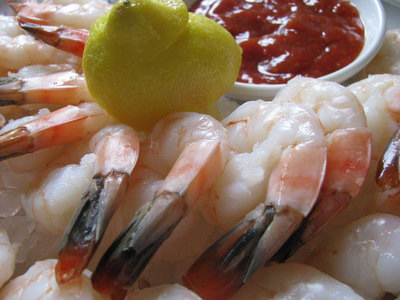 And a third of her favorite dishes is the stately hamburger. For the first time, I ground my own meat. Half brisket-half sirloin. It really was simple and I felt good about knowing what was in my hamburger. I seasoned with salt and pepper.

I topped mine with pimento cheese: 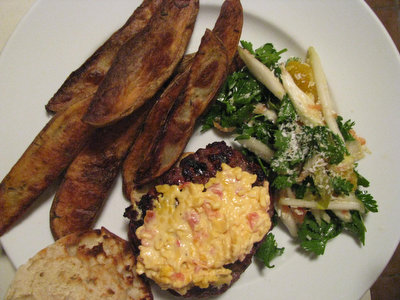 I also made oven fries and a parsley-endive salad with orange, grapefruit and coconut. It’s a grown-up version of ambrosia and I found it in the new Simple Fresh Southern: Knock-Out Dishes with Down Home Flavor by Matt Lee and Ted Lee. It was fabulous.

Best part? I tossed the leftovers with some wheatberries and I now have my own kicked-up version of tabouli.

For dessert, I served one of my favorite recipes, a Pastel Vasco from Suzanne Goin’s Sunday Suppers at Lucques cookbook. Instead of blackberries, as she suggests, I did a strawberry compote. 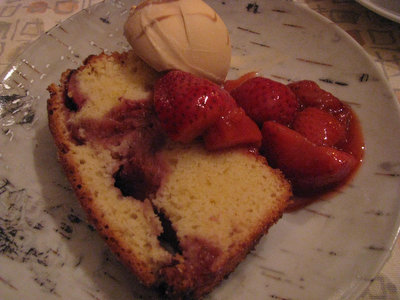 I spent most of the day Sunday working on the closet situation. Ugh. Finally, it’s done. We lit a fire and I read on the couch, curled up with a wool blanket, determined not to put the heat on for just one measly night. My friend Lettie stopped by for a little while and then left to celebrate her owner Mother’s Day (as the mom of Rudy, a corgi).

For Sunday supper, we had a one-dish meal: Cannellini beans (from Rancho Gordo, of course!) with spiced lamb and cilantro: 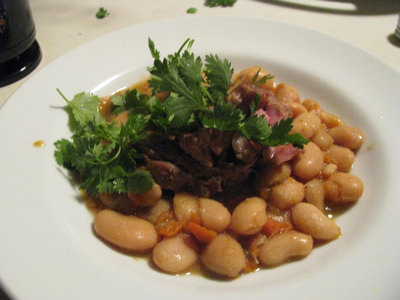 My husband made the beans with an easy-peasy mirepoix that I picked up all chopped and ready to go at Old World Market. He mixed that with some double smoked bacon from Schaller & Weber (also Old World) and let the beans bubble away for a few hours. Meanwhile, I was marinating the lamb with some very Moroccan-esque spices: cumin, coriander, cinnamon and cloves. The meat is more of a garnish, really. This dish is more about the beans. But with those spices, and a nice sprig of cilantro — this is something worth trotting out for company.

Doug has a super-cute video of Katherine Curry out on some “research” for upcoming JN articles. (I’m in there, too, and so is Colin Muldoon, who is interning with me for six weeks.) (HT)

Some good words on Stephen’s Green in Crestwood. (CH)
Todd visits Mex-To-Go in Croton. (WE)
Alice enjoyed her meals at Day Boat Cafe. (NYT)
And, in her sidebar on the review — Quick Bite: Shell’s Kitchen — Alice weighs in on the debate sparked here in response my blog post on Day Boat about whether the price of the lobster roll is fair. Though I wonder: Is Small Bites so influential that it’s now known as the “blogosphere” to the New York Times? Next time, Alice, come on over and join the conversation! Right, folks?