Katherine Curry again, back with another ice cream update. 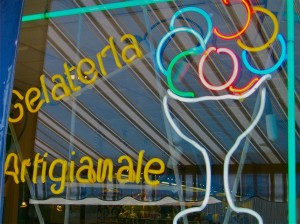 The spot has no sign of its own beyond this spiffy neon one, partially obscured by a Lotto banner  — the gelateria really is an extension of the pizzeria, despite its separate entrance, but the menu board inside sports the name “Sapori d’Italia,” which means “taste of Italy.” So, I’m not sure what the heck to call this place, other than yummy.

Made by Maria Gatta, who moved here from Naples and used to make gelato in Turino, the gelato is intensely flavored and, when it’s freshly made, possessed of an absolutely ideal texture. 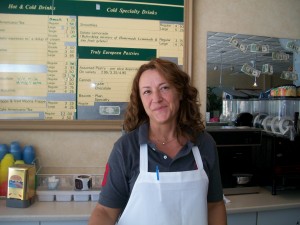 Ossining Pizzeria has received raves for years for its gelato, but I have to be honest:  up until recently, I’ve been pretty underwhelmed.  Not any more. 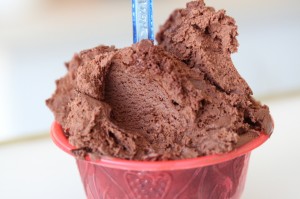 I don’t know what’s changed — does Maria have a secret recipe?  Are there new machines?  In the past, did I repeatedly have the misfortune to visit on “bad” gelato days?  (That’s a possibility, since I recall several visits in the winter, when the gelato might not have been that fresh.)  It doesn’t matter — that’s all in the past.  Let’s live in the delicious, gelato-rich present, where I can stop in for a double espresso from one of the most gloriously-designed espresso machines I’ve ever seen. 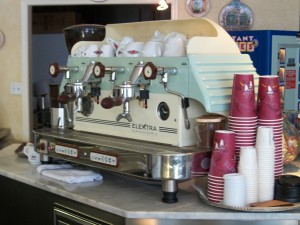 Then I can have a friendly chat with Maria and sample a few flavors — banana is sweetly redolent of ripe bananas;  coconut is too much for me, a non-coconut lover, but it sends my husband into rapture; green apple…meh, not for me;  coffee gelato is so strong I get a little buzz after one spoonful; and the lemon is tart and citrusy enough to cleanse even the most garlic-laden palate. 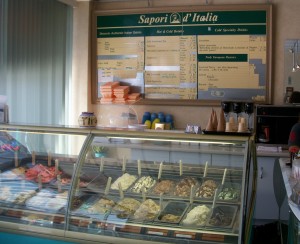 I usually settle on either Bounty, a crema gelato laced with chocolate, hazelnuts and coconut; or tiramisu, which is an excellent frozen translation of one of my favorite desserts.  This is the rare spot where I love the specialty flavors more than basic chocolate, which is my usual go-to flavor. 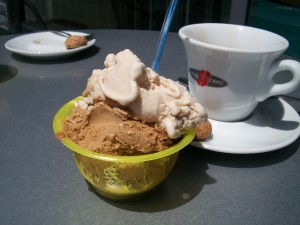 With twenty-four flavors of gelato and sorbetto, Ossining Pizzeria’s gelateria has something for everyone.  (And Italian ice by Scara is also available.)  How about flavorful, free-of-artificial-green-coloring pistachio gelato? If you prefer fruit flavors, try the strawberry or mango.  And the presence of an espresso machine means you can ask for an affogato di gelato, which is vanilla gelato drowned in espresso.

The only caveat here is that storage sometimes seems to be an issue.  On several occasions, flavors that were lush and supple on a Friday were slightly icy and compromised in texture five days later.   When fresh, the gelato here is wonderful.  Half a spoon in the ratings was deducted for this inconsistency, which definitely affects the quality.

Vanilla: Peppered with an overabundance of vanilla bean flecks, this vanilla is extremely creamy and dense without being heavy, and a delight to eat solo or in tandem with a fruit-flavored gelato or sorbetto.  Three and a half spoons.

Chocolate: The chocolate flavor is quite strong, but lacks depth, and is offset by a light texture.  Rich without being overpowering, this chocolate gelato is great for a hot day — you can’t say that about every chocolate gelato or ice cream.  Three spoons.

Specialty Flavor:  Bounty, with its irresistible buried treasure of dark chocolate, coconut and hazelnut, is the flavor I can’t get enough of.  The smoothness of the gelato is offset by the satisfying crunch of the bits of coconut, nuts and chocolate.  Four spoons.