People are reading
You are at:Home»Food Links We Love»Chef David DiBari of The Cookery in Puglia

[From Liz: Chef David DiBari of the Cookery in Dobbs Ferry is on a wine trip to Italy. He’s blogging along the way. Here’s his latest report.]

The next stop in Puglia was the estate of Rivera, which is is known for their flagship Il Falcone wine — it’s pretty popular in the states.

The wine is made from a blend of Nero di Troia and Montepulciano. Primitivo is another popular grape of the region along with aglianico, Negroamaro, Malvesia Nera and Bonbino Nero.

The De Coratos are an extremely handsome and warming family who have mastered wine making in their region. What I find important in their wine making is the use of indigenous grapes that are not  popular  to the American palate and pair well with food.

The Family lives in Bari so I happen to be slightly partial to their food and wine. Their use of nero di troia in their “Puer Apuliae” Nero di Troia Casetl del Monte DOC 2004  stood out the most. Another favorite that paired perfectly with the ravioli which I will talk about later was the use of Aglianico in the “Cappellaccio” Aglianico Castel del Monte 2003.

Their facility was immaculate and their passion for pugliese wines screams through their product. 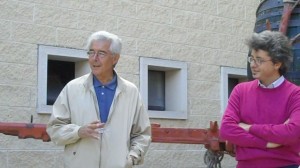 What I found interesting again in this region of is that The De corato family also relies on the use of wind and sun to create energy necessary for the wine production. 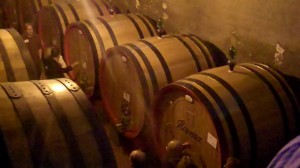 I’m looking forward to starting the summer with a lovely rose made from the Bombino Nero grape grown exclusively in this region.

The real treat of the night was sitting at a table with Signora De Corato, who was responsible for preparing the food for the evening.

Years ago I sat down for diner and had one of the best soups I have ever had with mussels, scallions and barley with a touch of tomato. After returning to NY the dish adapted many evolutions one of which was popular at Zuppa when I was the chef there: Mussels with Fregula, sopressatta and scallions.

I was hoping for this soup but singora had some other tricks up her sleeve. Mussels basked with rice and potatoes, Giant ravioli stuffed with ricotta and cinnamon tossed with a simple pork sugo, then manza involtino with caramelized onions and swiss chard. 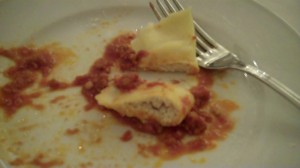 Sorry I keep forgetting to take the picture before I begin eating. I’m sure you can understand!!! 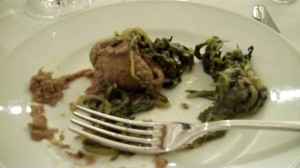 We finished with a simple mimosa cake which means “for women.”

The cake was prepared with a sponge batter baked and filled with a pastry cream containing acacia, which is an indigenous citrus fruit of the area.

Talking with Signora De Corato and tasting her food made me feel like we knew each other forever. Our style of food is so similar in the development of flavor and the balance of simplicity and progression. And when I say progression I mean what was is new to the states is old to the Puglia.

She explained how her mother used to make polpetone (meat loaf) with fresh cherries in the meat for sweetness. The ravioli with a touch of cinnamon in the the ricotta touched my heart bringing an aroma complimentary to the pork and sweetness to creamy cheese.

Those of you who know the Cookery and my style of cooking there is a prevalence in both Signora De Corato and myself.  I wish I could have spent a couple of days cooking with her. 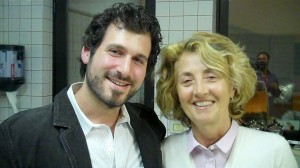