Hi, everyone– Katherine Curry, back with another ice cream report, this one on the homemade gelato at Bellizzi in Mount Kisco.

Bellizzi’s gelato took top honors in Westchester magazine’s 2008 “Best of Westchester” issue, so it’s no secret that the gelato here is good.  Normally, when I visit Bellizzi, it’s with my kids, who spend most of their time in here.

What I’ve always loved about Bellizzi is that the food is so good–much better than you’d expect from a place that has a kiddie, arcade-theme going on.   Pastas and pizzas, and the new spa-venti salads, make for delicious lunch and dinner choices.

Since I’ve only visited Bellizzi with children, it seemed appropriate to get a child’s input on Bellizzi’s gelato.  My seven-year-old daughter Lauren loves ice cream almost as much as I do, so she was my tasting partner.

At Bellizzi, there are a dozen flavors of gelato and sorbetto on hand each day.  Most flavors are mainstays — chocolate, vanilla, cookies & cream, lemon, strawberry — but some rotate in and out.  Gelato is made fresh several times a week.

We started with the classics, chocolate and vanilla.

I thought the chocolate was good — not transcendent, but a nice, creamy texture and a good flavor.  Lauren’s opinion?  “It tastes like a Hershey Kiss!”  I think that’s a pretty ringing endorsement.

On to the vanilla, which had some small ice crystals in it, not a good thing.  The vanilla flavor, at least in this batch, was very mild — so mild, in fact, that Lauren’s take was: “Okay. But it doesn’t have much taste.”

I tasted the bubble gum — I’m not the target audience for this one, but I did think the creamy texture worked well with the flavor.  It’s so cloyingly sweet, though, I couldn’t imagine eating more than one spoonful.  Lauren’s response to bubble gum gelato was, “Why?”  Indeed.

Lauren also passed on the espresso gelato (a good thing — do I need a caffeinated seven-year-old?), but I found it to be excellent, with a smooth texture and an intense espresso flavor.  The lemon sorbetto was extremely tart and flavorful, making it a perfect choice for a hot day.  (Pair it with that mild vanilla gelato for a refreshing contrast.)  Together we devoured a cup of the toasted almond gelato, which, in addition to flavorful roasted almonds, had shreds of coconut and shards of dark chocolate.  I’ve come to realize that I’m a real sucker for this sort of nut/chocolate/coconut combination.  Even Lauren, who doesn’t care for nuts or coconut, approved. “I taste nuts,” she said warily. “But it’s pretty good.”

The biscotti flavor, a sweet cream gelato with threads of dark chocolate and crushed biscotti, is a textural delight–try  it with the espresso gelato for a great dessert combination. 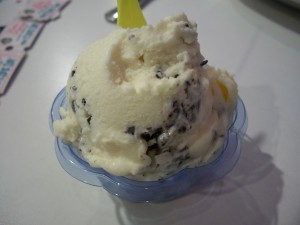 The Scoop: A dozen flavors of gelato and sorbetto on hand.  A small is $3, medium is $4, and the large serving (VERY large) is $6.  I wouldn’t drive miles out of my way for Bellizzi’s gelato, but I am always very happy to get a scoop when I visit this friendly spot with my kids.  And if you’re just passing through Mount Kisco, stop in for a cup to go and skip the kiddie arcade!

Vanilla:  Too mild in flavor for me, and texture has been a little icy on some visits.  Two and a half spoons.

Chocolate:  A very nice chocolate gelato with a true chocolate flavor. Because of the low butterfat content, this is a light, refreshing chocolate treat for summer. Three spoons.

Specialty Flavor: If you’re under the age of nine and love sweets, bubble gum gelato might be your go-to flavor.  More grown-up palates should try the tart lemon sorbetto, toasted almond, or biscotti flavors — four spoons for each of these flavors. 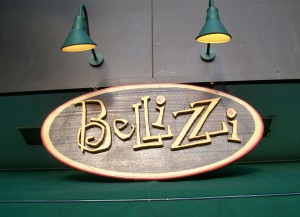