People are reading
You are at:Home»Cooking»From the Local Winner in the Avocado Recipe Challenge: Sweet Avocado Tabbouleh

Christine Yang of Garnerville won first runner up in the National Adaptable Avocado Recipe Challenge, — a prize worth $500! — for her Sweet Avocado Tabbouleh. 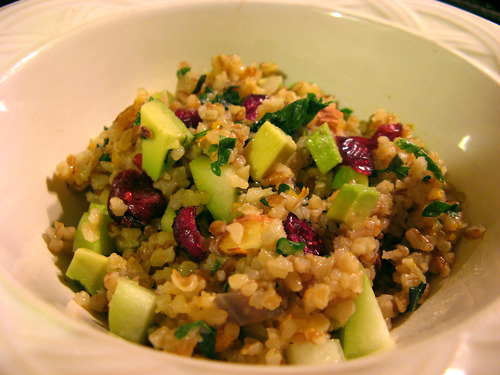 Congrats, Christine! The recipe, after the jump.

This is not at all a traditional Middle Eastern tabbouleh. I call it that only because it is a bulgar salad with cucumbers, parsley, and mint (Incidentally, this may have been the first time I’ve cooked with fresh mint and now I’m thinking about finding any excuse to add mint to food because it smells incredible!).

Personally I find classic tabboulehs heavily herbacious and olive oil-y and yet simultaneously lacking flavor. So I’ve decided to give the tabbouleh a makeover with some unexpected twists…

Avocado? In tabbouleh??? In other bulgar salads I’ve made, I’ve added goat cheese, which added its signature salty musky taste, but more importantly added an interesting creaminess. I wanted to add creaminess and a savory/sweet thing going on in this tabbouleh, so avocado seemed like the perfect addition to complement the sweetness added by caramelized red onion, dried cranberries, and orange zest. Other important modifications include boiling the bulgar in chicken broth to make it deliciously savory, and the addition of roasted almonds to add an unexpected crunch.

So there you have it-tabbouleh, savory, sweet, creamy, crunchy. What more could you ask for? If someone wanted to serve tabbouleh in individual white Chinese soup spoons (I don’t know if anyone would), this is the recipe they would use =)

1 ripe (but not too mushy, you want it to hold its shape) Mexican avocado, cut into 1/4” cubes

1 tbsp juice from an orange

salt and pepper to taste

1. Put the bulgar and chicken broth in a pot over high heat. Once it begins to boil, reduce the heat to medium. Cook, stirring occasionally to prevent burning on the bottom, about 8 minutes or unil the bulgar is soft and the liquid has been absorbed.

2. Meanwhile heat the vegetable oil in a small skillet over medium heat. Add the onions and brown sugar and cook until the onions are translucent, about 4 minutes.

3. When the bulgar and onions are cooked, mix them together in a medium-sized bowl with the remaining ingredients and toss until incorporated.