People are reading
You are at:Home»Restaurants»Christian Petroni, Formerly of Peniche, Currently ‘Chopped’ Winner, at Barcelona in Greenwich

After watching the Christian Petroni take home the $10,000 prize on “Chopped” earlier this season, it reminded me that I still hadn’t gone for a meal at Barcelona in Greenwich, where he is now chef and general manager. 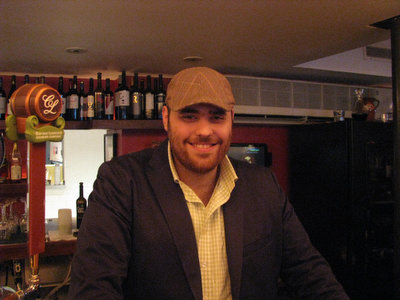 Christian used to be the chef de cuisine at Peniche in White Plains, but he left in fall, 2009. So yes, this visit was overdue. We started with some olives. Simple, but delicious, with herbs and orange zest: 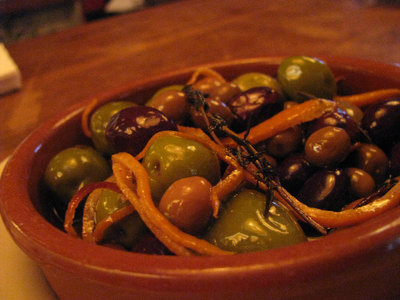 I came right after work, so the restaurant was still pretty empty. Christian tells me it’s really popular late-night: 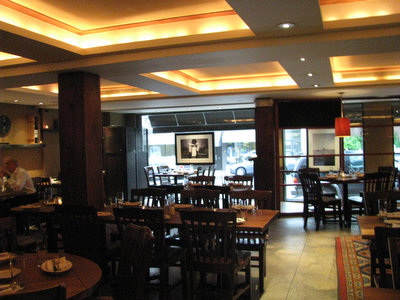 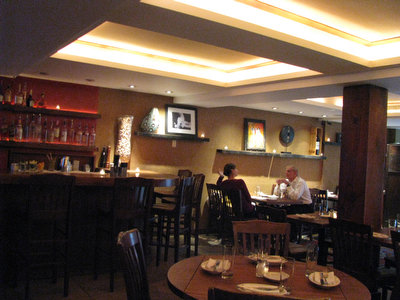 These croquettes with ham and cheese were absolutely heavenly. Crisp on the outside, gooey on the inside: 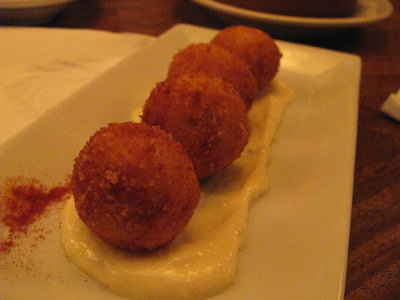 Burrata with greens and grilled bread: 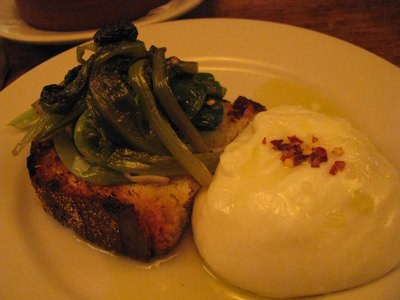 Insane. Have you had burrata before? It’s like an intense mozzarella with a melty burst of creamy cheese inside. 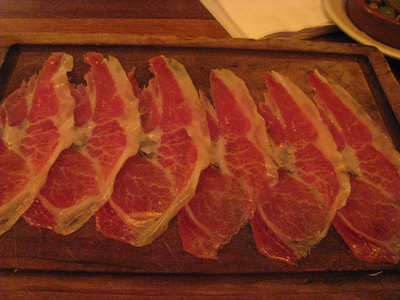 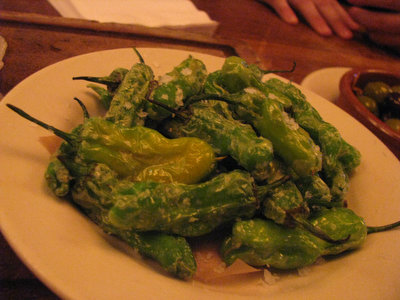 They are Christian’s favorite. They say that only one in 33 are hot, but when you get that hot one, man oh man, watch out. My friend took her first taste and — bam. She got hit with it. Her eyes were watering and her mouth was burning. I felt so bad for her! Ours were mild and salty and crunchy. 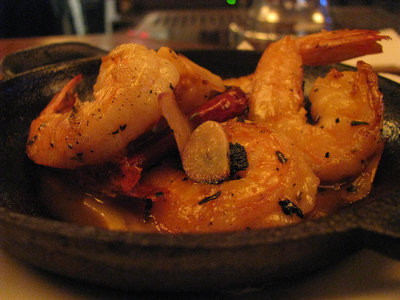 This — and the chorizo and dates, below — are traditional Spanish tapas, and they’ve been on the menu at Barcelona for a long time. Christian and his crew execute them admirably: 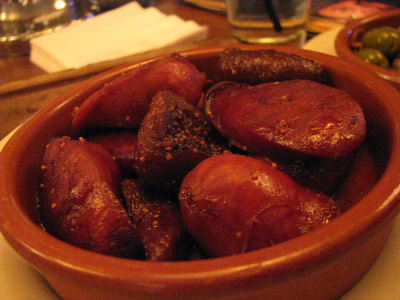 My friend and colleague, Karen Croke, left, and me, listening intently: 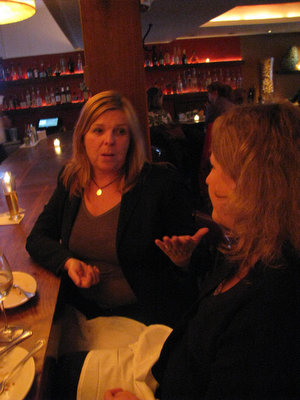 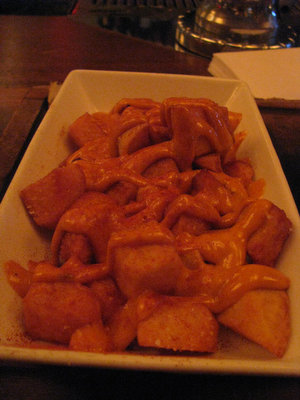 Also traditional tapas. These are fried potatoes with a spicy pepper-garlic-mayo sauce. They are so addictive.

Christian is doing small pizzas here. This one, with mushrooms and arugula, was out of this world: 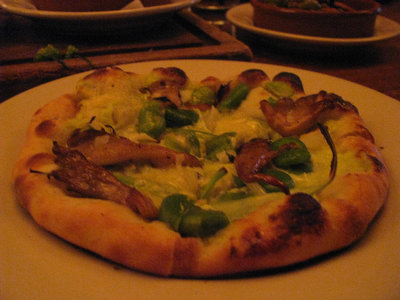 Here is a not-so-traditional dish for a Spanish restaurant, lobster risotto: 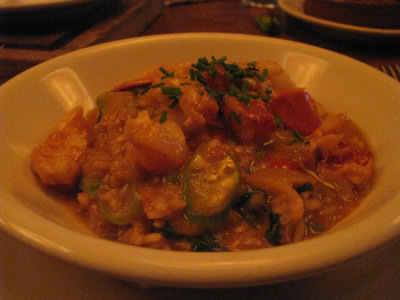 Maybe it’s because I don’t expect this at a tapas restaurant, but I just wasn’t that into this dish. It was tasty enough — very rich, indeed — but it just wasn’t for me.

This simple preparation of striped bass was more up my alley: 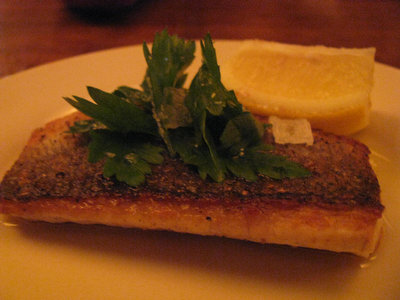 By the time we were finished with our savory courses, the restaurant really started to pick up: 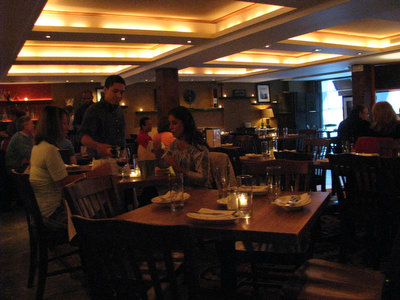 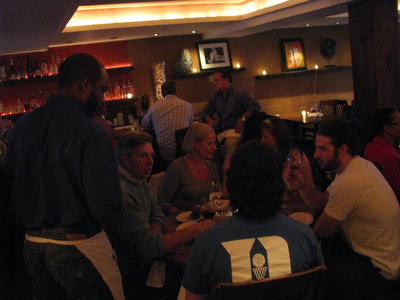 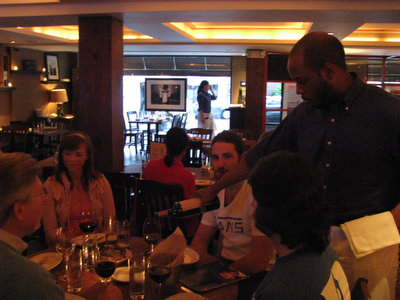 Aren’t they having fun!

For dessert, Christian sent out churros with chocolate for dipping: 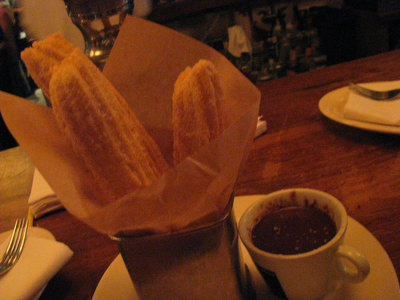 Hot, flaky, fried. With chocolate. How can you beat that? 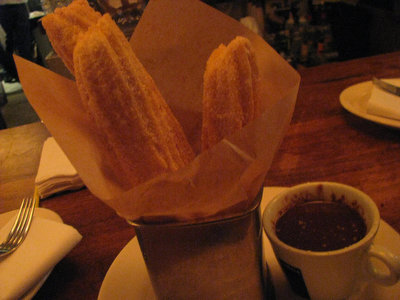 So I know this is just a little out of LoHud’s typical coverage area, but it is only just over the border. And guess what: the following weekend, Karen and her husband came by after attending a performance at Purchase. It got out at 10 p.m., and they were hungry for dinner. Barcelona really fit the bill.