Hi, Katherine Curry checking in again.  The theme this weekend on Small Bites seems to be Connecticut roadtrips! In my continued quest for the best chili dogs in the area, I took a short road trip this week up to Danbury, CT, (for me, it’s about a 35 minute drive), where I had lunch with Roadfood.com’s Michael Stern at JK’s, a Texas hot weiner spot that dates back to 1924, when it was known as “Original Texas Hot Weiners”.

Later in the day, looking at my pictures of JK’s dog, I found myself craving another one. 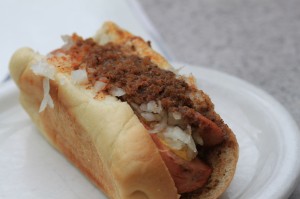 And by the way, later this summer, I’ll be taking another road trip, this one upstate to visit Beacon and Newburgh, a “Texas hot” hot spot. So if you’ve got any tips on places to visit, leave them in the comments section, please!

JK’s has been in its current location on South Street since 1974. 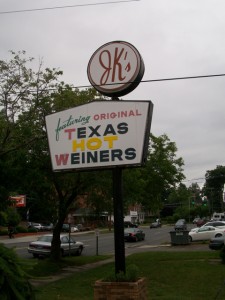 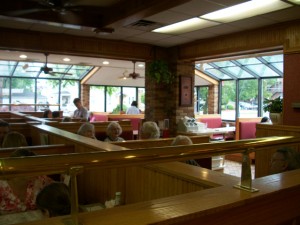 It’s a fairly large restaurant — lots of booths, and windows and skylights that bathe the wieners in an ethereal glow. Oh, and table service — a chili dog place with waitresses, imagine that!  (There are plenty of other things on the menu besides chili dogs, hot and cold sandwiches, burgers, and breakfast items.)

Here’s the counter and spic-and-span kitchen; in the back is where the Texas hot weiner magic happens. 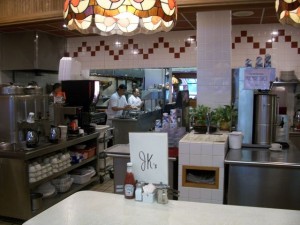 The dogs are fat and juicy.  They’re split and grilled until they’re a wee bit crispy on the outside.  I don’t know what kind of rolls JK’s uses, but they are mighty fine — soft but substantial.  I’ve learned from eating a lot of chili dogs that splitting the dog, and having a non-wimpy bun, are important elements in a successful chili dog.  The split weiner acts as a succulent cradle for the chili, and a good bun is strong enough to stand up to the onslaught of messiness that is the chili dog’s modus operandi. 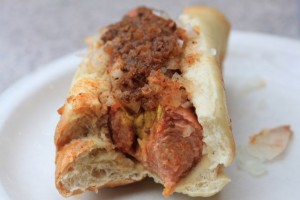 My dog at JK’s had just a smattering of chili.  I could have done with a bit more to balance out the knock-out punch of the pungent raw onions.  Rumor has it there was cheese on my dog, but honestly, I couldn’t really taste it because of everything else that was going on.  After I finished it, I was ready for another, but ice cream research and another lunch stop took precedence.

Speaking of that….while you’re in Danbury, there are some very good, inexpensive places to eat, including: 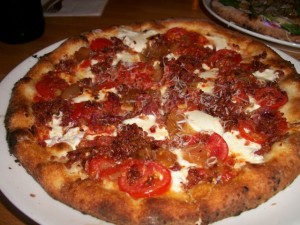 Here’s a tray of sausage sizzling in the beautiful wood-burning oven. 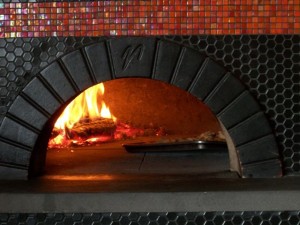 And for dessert, Dr. Mike’s Ice Cream Shop in neighboring Bethel.  Dr. Mike’s chocolate is pretty darn close to the best chocolate ice cream I’ve ever had, although I think Jane’s wins by a nose.  (And on the way home, I stopped at Stew Leonard’s –incredibly,  the Danbury Stew Leonard’s is only a few minutes further for me than heading down to Yonkers!)

Next up on the chili dog quest:  Mamaroneck’s beloved Walter’s and White Plains’ The Little Spot.

If you’re going to JK’s: