People are reading
You are at:Home»Restaurants»Bistro Rollin in Pelham

While reporting for my story on the dining pleasures of Pelham last month, I finally got the chance to dine at Bistro Rollin, the French bistro that opened there last year. 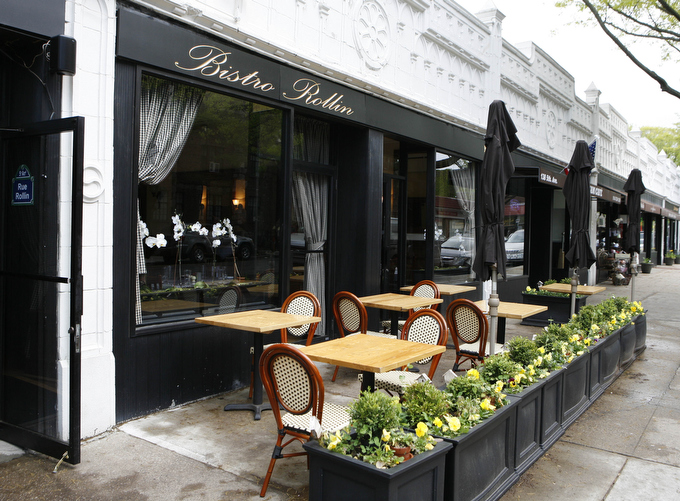 (Big photos by Mark Vergari/TJN; small photos by me)

It’s a cute and cozy restaurant, with many of the homey touches you’d find in a bistro in Paris: bent-wood chairs, a little bar, classic dishes on the menu. But it’s not so down-to-earth that you feel like you’re in grandma’s kitchen. There’s an air of sophistication, too, with (some) white tablecloths and polite service. 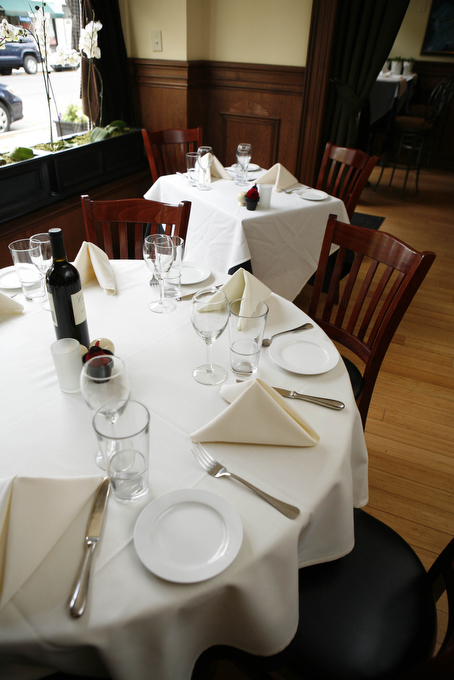 You enter through the bar area: 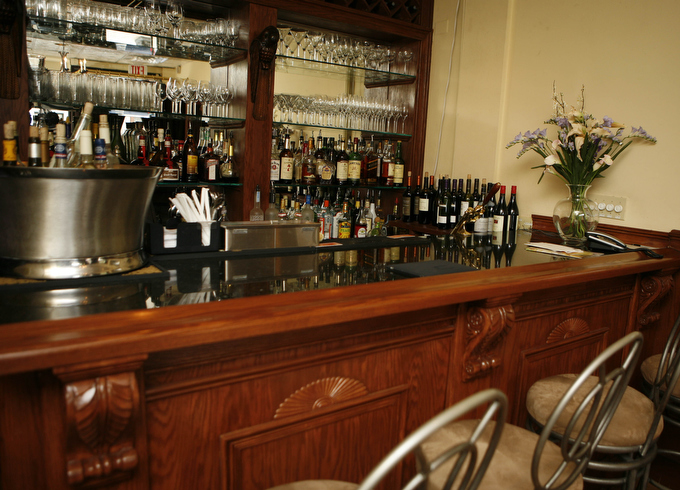 And the dining room is to the right: 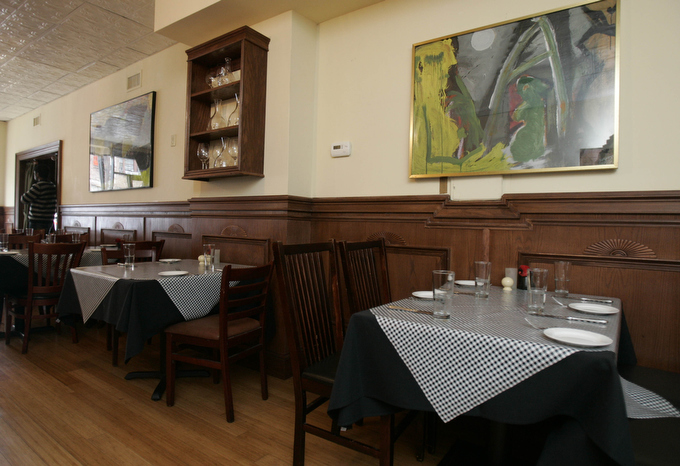 The owners, Barbara and Arthur Bratone — here’s Arthur, below: 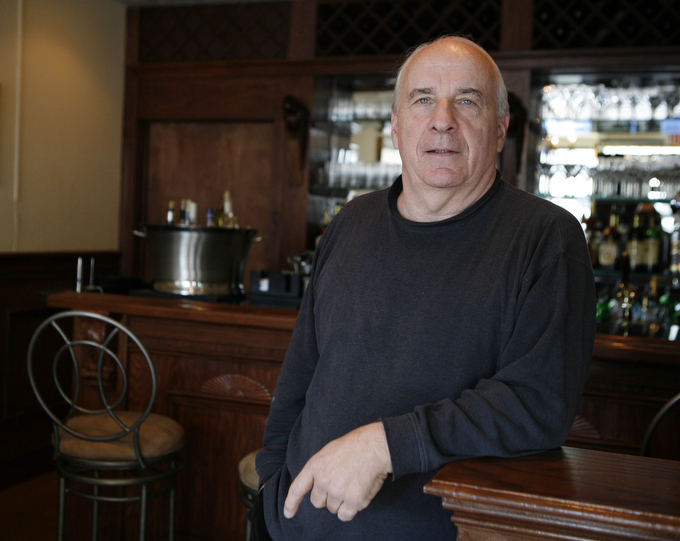 — named the restaurant after a street in the Fifth Arrondissement in Paris, where they lived for a time: 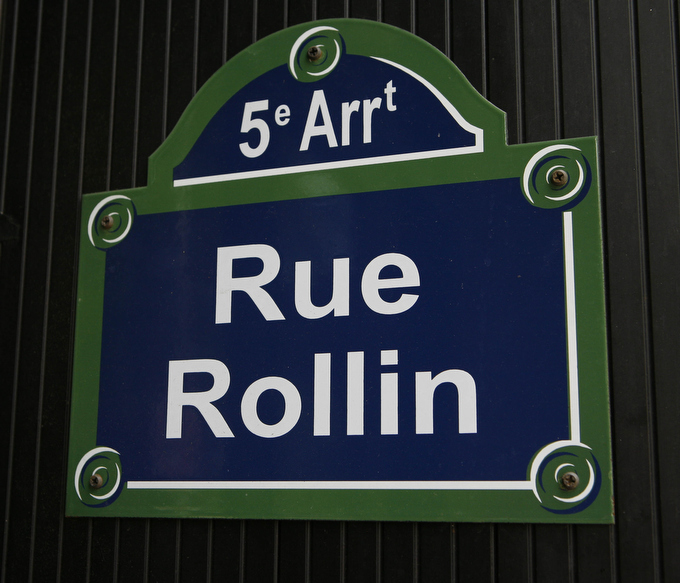 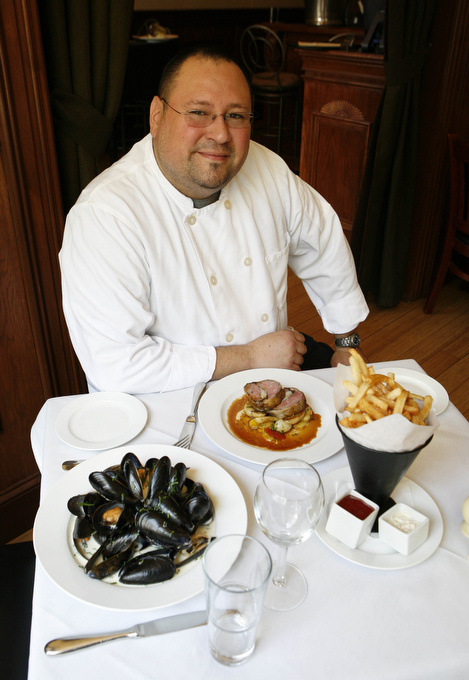 I could dig into those fries about now: 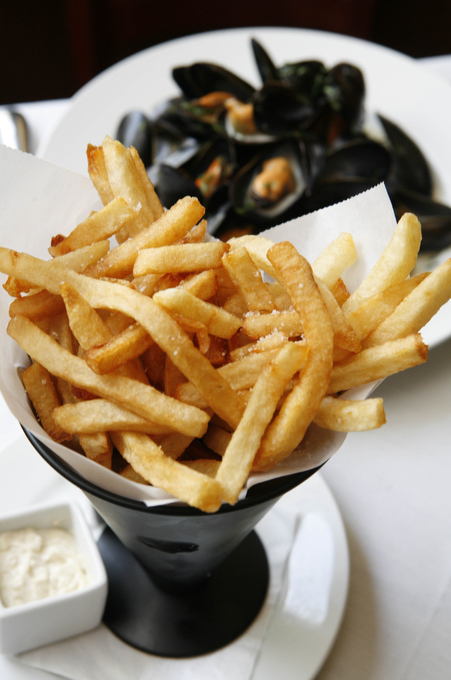 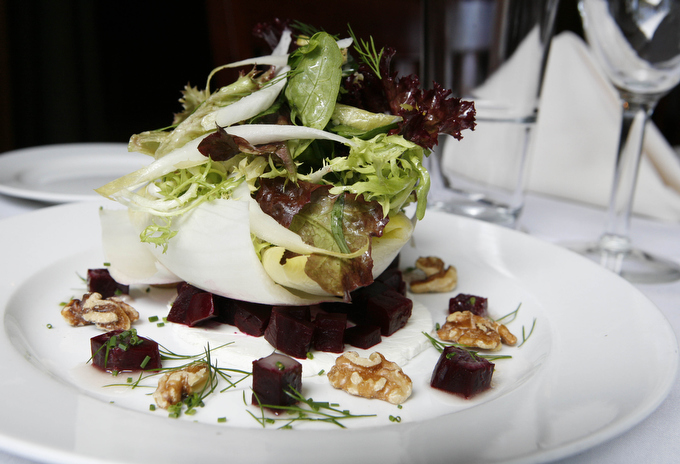 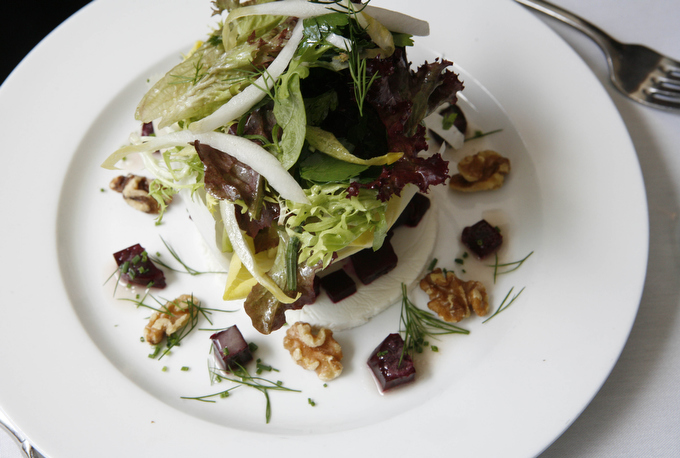 Loin of Lamb lightly studded with garlic and olive tapenade with rainbow carrots: 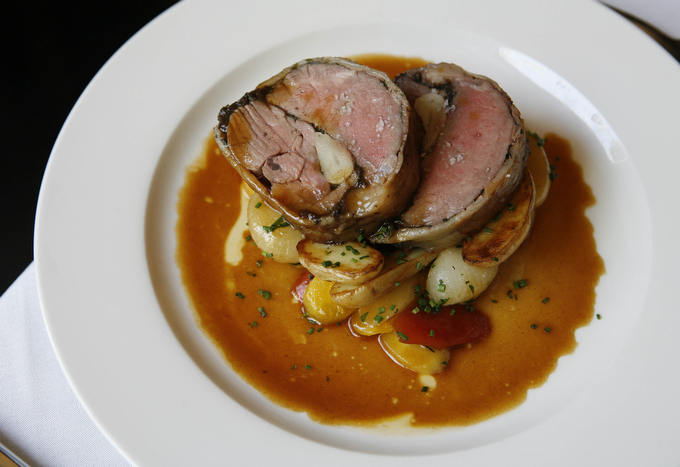 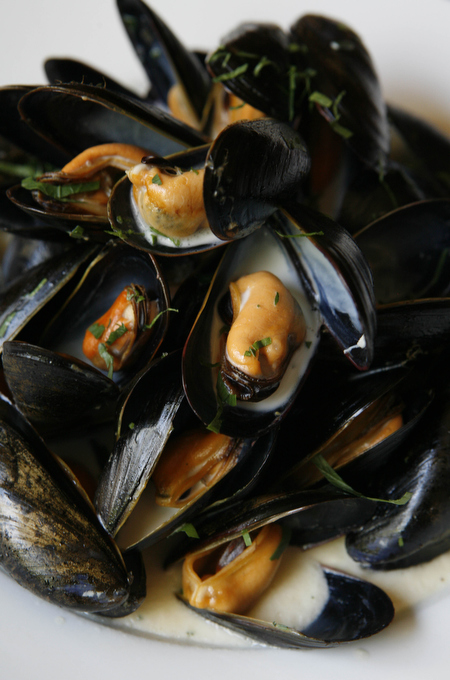 When I was there dined, we tried a few other dishes. (These are my photos now; sorry for bad quality.) When the Bistro Frisée Salad with Bacon, Garlic, Poached Egg, Vinaigrette, here — 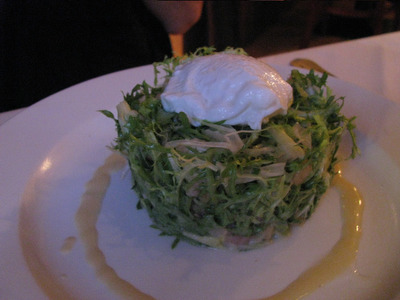 — and the Onion Tart with White Asparagus and Mushrooms, here — 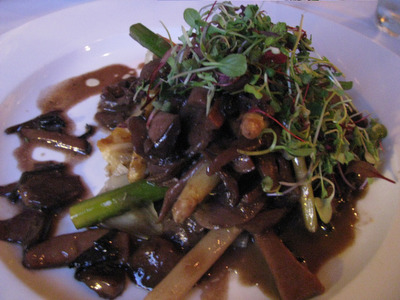 — landed on our table, I found the difference between their presentations quite surprising.

I’m guessing the chef was putting a twist on these classics, because normally you wouldn’t find a composed frisee salad, all neat as a pin in its cylindrical shape with the egg perched on top like a little hat. And normally, you would find a traditional onion tart with a crust and a thin(ish) layer of caramelized onions. It was as if he’d switched the two presentations on these dishes.

The frisee salad was the winner here. Just the right amount dressing gave the salad a bracing bite, and the rich egg softened that. As for the tart, the mushrooms were meaty and the asparagus was fresh, but there were too many flavors all mixed up to truly enjoy the dish as a whole.

Even though the dining room was fairly empty — 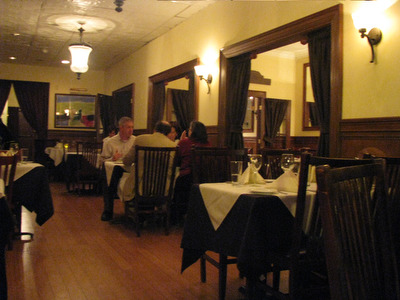 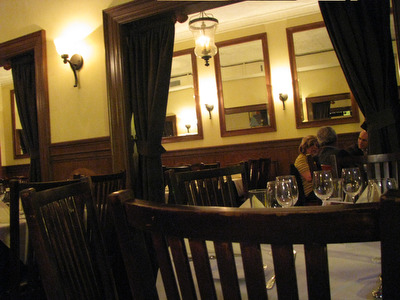 — we had to wait close to an hour for our entrees. We were waiting so long that at one point, the hostess asked if we’d like to see dessert menus. We told her we were still waiting for our entrees, and they arrived somewhat shortly after that.

One other note on the service, which was a little strange. Our waiter, who was very earnest and sweet, kept calling us by “m’lady,” as if we were dining in some Renaissance castle. And at one point, after he poured some wine, he used a plate to catch the drips from the neck of the bottle. We had to laugh. (And we poured the rest of the bottle ourselves!)

The wine list, by the way, is a real find. There are lots of interesting choices for very reasonable prices. My friend Lettie, who is the wine columnist for the Wall Street Journal, was along for this meal, and so I let her choose. She found a lovely 2007 Domaine les Paillieres Gigondas.

For our entrees, we had the Roasted Half Chicken Grand-Mère with Button Mushrooms, Pearl Onions, Bacon Lardons: 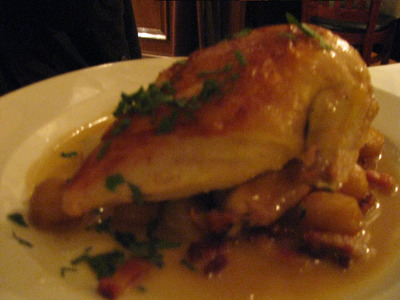 And the Steak Frites, a New York Strip, with Green Peppercorn Sauce and French Fries. 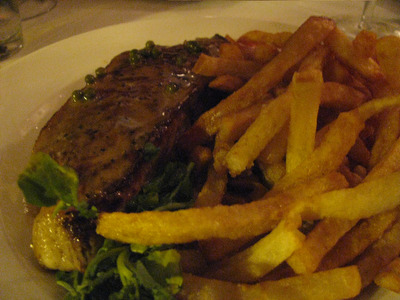 This time, the steak was the star. There was no twist on either of these classics; the chef played them both straight. The steak was cooked medium rare are requested, and the fries were crispy and addictive. The chicken, while juicy, had a bit of a fishy taste, as if the kitchen had just prepared salmon in a pan and then used the same pan to saute the chicken. The mushrooms, again, were meaty and good, and the lardons were crispier in this dish than in the salad, which I liked.

We decided to forgo dessert — we’d been at our table for so long and we were ready to call it a night. 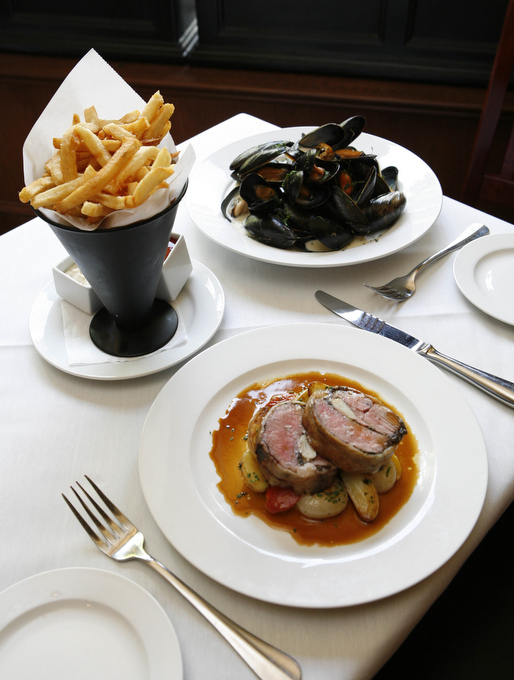 Despite a few missteps during my meal, there are many thing to like about Bistro Rollin, not least of which is the wine list. That frisee salad is still calling my name, and I’d like to sample a few more of the dishes, too. (Those mussels look plump and juicy.) I’ll just be sure to take along a friend who doesn’t mind my company  — just in case we have to wait a while. After all, it’s not like sharing a delicious bottle of wine in a comfortable restaurant is a burden. 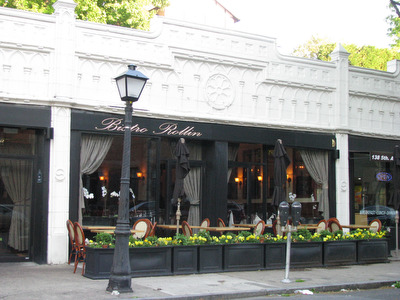 Eespecially at an outdoor table on a nice summer night, it’s just what you want out of a neighborhood bistro — no matter if that neighborhood is in Paris or Pelham.