People are reading
You are at:Home»Shopping»Farmers Markets»The Pie Lady of Nyack is Back, This Time with Her Son

Linda Lombroso wrote a great story this week in the food section about Deborah Tyler and her son Wil, who have brought the once-loved Pie Lady pies back to Nyack. They’re for sale at the farmers markets on Thursdays. 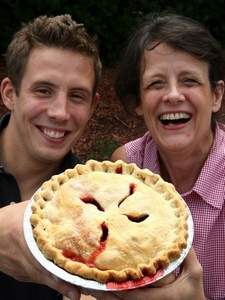 Linda’s story, after the jump.

Eight years ago, the Pie Lady of Nyack vanished from Rockland without so much as a trail of crumbs.

his season, her pies are back at the Nyack Farmers Market — and Deborah Tyler is ready to talk about her crust, her disappearance and the 25-year-old who resuscitated her once-thriving business.

Relaunched last fall as The Pie Lady & Son, the new company is a joint venture between Tyler, who now lives in Cooperstown, N.Y., and her son, Wil, who bakes every pie in Nyack, just as his mother did, sticking to the recipes and techniques she perfected as the original Pie Lady.

“When she closed down, none of us ever ate pie again,” says Wil, who decided his mother’s pie company deserved a second try — this time with a better handle on the business side of things. Last year, he transferred all her recipes from index cards to Excel files, and worked as her apprentice until he learned how to make apple, strawberry-rhubarb and apple-crumb pies just the way the Pie Lady did it.

“She’s really a perfectionist, and more than anything, she doesn’t want to put our name on any pies that aren’t exactly as they should be,” he says.

“Wil’s had this in the back of his mind for years, because these kids grew up with it,” says Tyler. “They loved it. It’s a part of their childhood.”

At the height of her success as the Pie Lady, Deborah Tyler was churning out 300 pies for Thanksgiving — shopping for ingredients, lugging them home and hand-rolling every crust herself.

“What happened, quite honestly, is that I got worn out,” she says. “I’m not a business-oriented person. I’m a baker, a mom, a craftsperson. I do things with my hands.”

It was Tyler’s extraordinary popularity that ultimately worked against her. A New York Times article created such a demand for her pies — the phone began ringing off the hook right after the story ran, she says — that she wilted under the pressure. “This is one person with a rolling pin and I’m by myself and I’m on the phone and everybody wants to talk, and by the time this day was over, I was totally in tears,” she says. “I was so overwhelmed, I couldn’t get the baking done, and people wanted the pies.”

The Pie Lady began her career in a house on Burd Street in 1995, where she was home taking care of her three children. Her pies were already a hit with the family, says Tyler. How hard could it be to sell them to the public?

As luck would have it, Tyler’s home was zoned for residential and commercial use — and her landlady upstairs offered the use of her oven. This way, Tyler could bake two ovens’ worth of pies, maximizing her output without any added expense.

“To tell you the truth, I didn’t have any permits or anything,” she says, laughing now at her naivete — and marveling at how she’d run and up down the stairs all day, pies balanced in both hands.

After giving away free pies to friends and local cafes, buzz started to grow. Tyler leaned a wooden sign with an arrow and the word PIE against a telephone pole at the corner of Burd Street and Piermont Avenue, directing customers to her kitchen. Her first Thanksgiving, she had orders for 75 pies. A year later, she turned a spare bedroom into a commercial kitchen and got a permit from the Board of Health. Customers used to come in through Tyler’s back door and stand in her kitchen, watching the pies cool as they talked to the baker.

It was one of the the greatest things that ever happened in her life, she says.

Belinda Cash, who met the Tylers when she moved to Nyack, recalls the homey touch that kept her going back to the Pie Lady. “You would walk right in and they’d all be there,” she says. “I just remember the coziness of it.”

As time passed, Tyler’s repertoire grew. She always worked with fruits in season, getting berries and peaches at DePiero’s Country Farm in Montvale, N.J., and Idared apples from The Orchards of Concklin in Pomona.

The recipe for her buttery pie crust, with its shortbread-like texture, comes from Tyler’s college days at a small school in Sussex, England, where she worked in the cafeteria baking Cornish pasties with a cook named Suzette. “Most everybody’s timid about pie dough. It’s just this fearsome thing, it makes people nervous,” says Tyler. “This lady approached it with courage.”

Cash, a reference librarian at the Nyack Public Library, says the Pie Lady’s crust reminds her of the pies her mother used to make in England.

Tyler says it only has four ingredients: flour, butter, salt and water.

“Everybody always says, ‘Oh my God, this crust is amazing!’ And it is,” she says. “I’ll sit down with a piece of pie out of the oven, let it cool down and I just find myself saying, ‘Oh my God this is really good, if I do say so myself.’ ”

Although Tyler still bakes for her family in Cooperstown, she’s planning on playing a “quality control” role in The Pie Lady & Son business — and coming down to help out whenever she can.

Wil, who splits his baking between his home and the Nyack Center, is eager to develop a customer base at the farmers market before exploring ways to expand the business.

As for the Pie Lady’s future in Rockland, Deborah Tyler wants to make one thing very clear: She’s back in the game and here to stay.

“We always say, whatever we do, we always need to keep something going here in Nyack, because this is where it all started,” she says.

Prices: Apple pie and apple-walnut crumb-top pie ($18 for 10-inch size, $10 for 8-inch). Strawberry-rhubarb pie is a dollar more. Slices of pie are $3.50 each. Selections of pie vary during the year (see web site for seasonal varieties).