People are reading
You are at:Home»Food Links We Love»The Journal News Ice Cream Odyssey: The Blue Pig in Croton

Hi, Katherine Curry reporting again on ice cream. Like many Northern Westchester ice cream lovers, I got pretty excited when I heard that Croton’s ice cream shop The Blue Pig re-opened this spring under new ownership, with a renewed focus on natural, homemade ice cream. 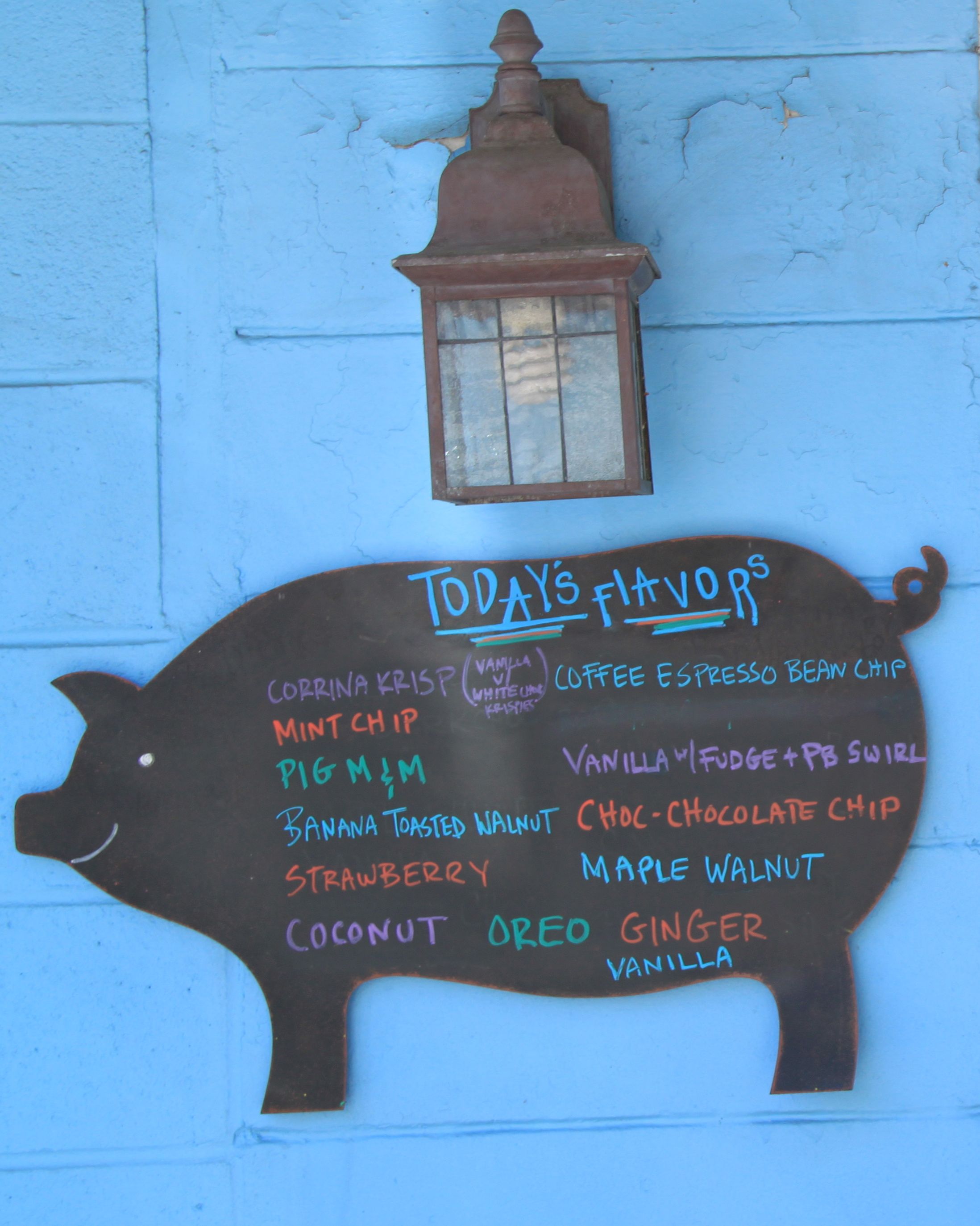 When The Blue Pig debuted in the summer of 2001, it was a real treat to visit — friendly service and excellent high-quality small batch ice cream.  But eventually things changed and not for the better: after a change in ownership, years of inconsistency — and some downright bad ice cream  — plagued The Pig.  Many of us stopped going.

So the news that  Croton resident Lisa Moir had bought the business in the upper village, and that she planned on serving all-natural, homemade ice cream, suggested that the establishment was back on track. 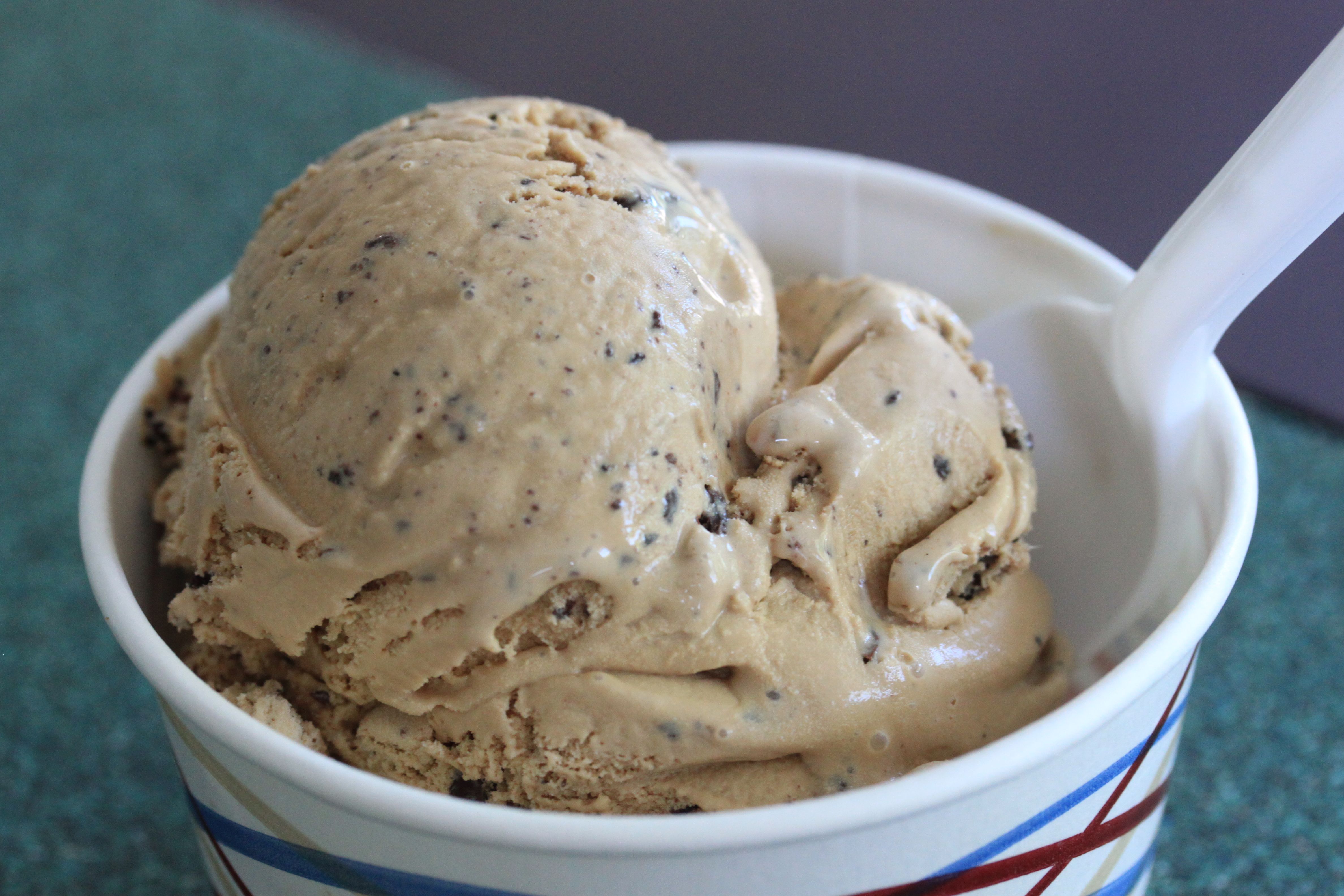 Above is a scoop of the coffee espresso bean chip, a very nice rendition of coffee ice cream.

Lisa’s not monkeying around (if you’ll forgive the inside joke).  She’s dedicated to using Hudson Valley Fresh dairy milk, focusing on local ingredients (coffee from Croton’s The Black Cow, seasonal fruit), and using less sugar, with no artificial colors and flavors.  The business just received a “snail of approval” award from Westchester Slow Food.  This focus on high-quality local and seasonal ingredients, and the resulting ice cream, reminds me very much in texture and taste of Brooklyn-based artisan ice cream company Van Leeuwen.

That’s Lisa on the right in the blue shirt. 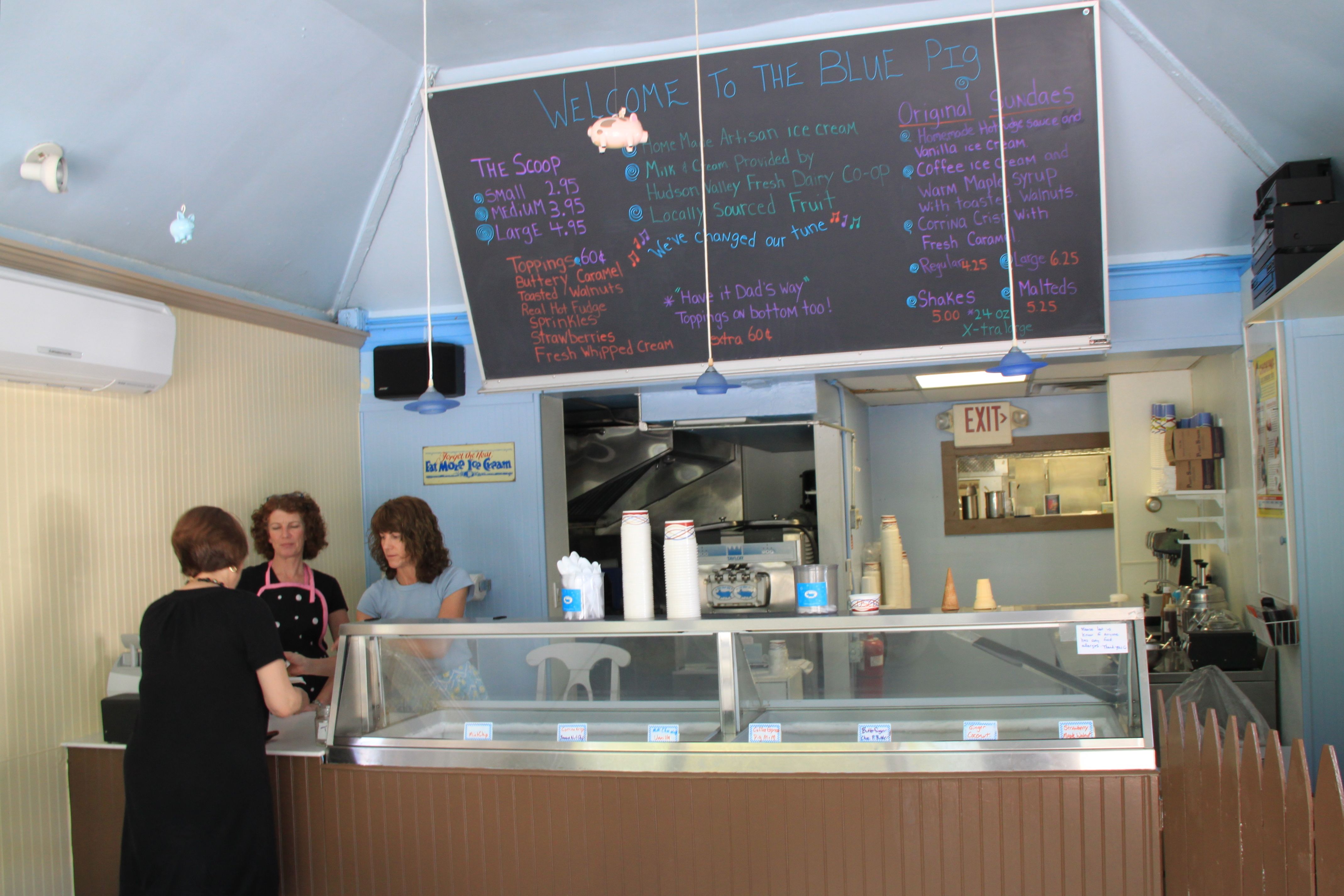 Flavors range from the traditional (vanilla, chocolate, Oreo cookies & cream, coffee, strawberry) to the seasonal and eclectic  (ginger, green tea, and a feature flavor this week that could quite literally knock your socks off:  Caribbean Hellfire, made with a fruit-based hot sauce from a local foodie.)  There are also fruit ices , which I’ve yet to try.

So how’s the ice cream?

The flavors are true — strawberry tastes of fresh fruit, vanilla is subtle enough to let the incredible taste of fresh dairy shine through, pistachio is as nutty as a handful of fresh nuts (although alas these nuts are a bit soggy).  Chocolate has a prominent chocolate flavor, although it lacks the depth of flavor that I tend to look for in chocolate.

Here’s a shot of a small cup of chocolate and pistachio, liberally studded with nuts.

If you didn’t know that The Blue Pig wasn’t using stabilizers or mixes, the ice cream’s texture alone would tip you off.  There’s none of the gumminess or stretchiness of the less natural ice cream you can find at places like…well…I won’t name names.  (That being said, the chocolate ice cream’s texture isn’t as creamy as I’d like. There’s an almost ice-milk, Fudgsicle texture to it — but then I’m partial to extra-rich, creamy chocolate ice cream. )

I’ve yet to sample the homemade hot fudge sauce or the “original sundaes,” which include a tempting coffee ice cream with warm maple syrup and toasted walnuts.   There are shakes and fresh waffle cones, and other toppings — 60 cents each — include fresh caramel, sprinkles, and whipped cream.  A small cup is $2.95, medium $3.95, and large is $4.95.

The Blue Pig is still working out some kinks. On some visits, a small cup of ice cream was such a woefully small serving that I almost went back for seconds, but on other visits, a small was an abundant cup of deliciousness.  Some flavors have had textural problems like ice crystals.  However, the guiding principles here — natural and local ingredients, quality ice cream, friendly service — remain clear, making The Blue Pig a must-visit for area ice cream lovers.

On a warm summer afternoon this week, I enjoyed my ice cream in the garden, a well-tended little area adjacent to the Pig (there are also a few seats inside, and some benches right in front of the shop). 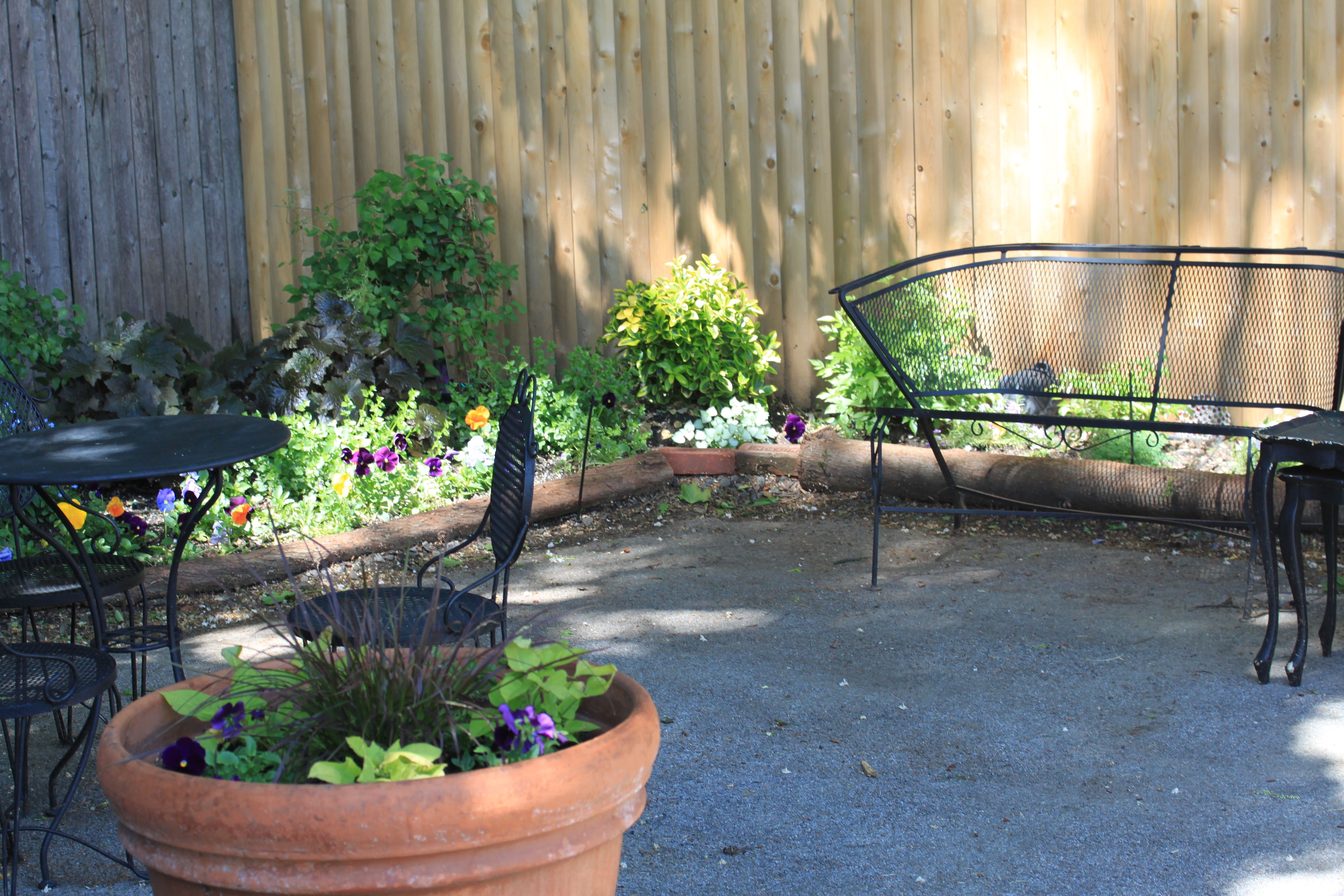 My favorite flavors so far are the vanilla Oreo, unctuous and cookie-rich, everything the flavor should be, and a cherry vanilla filled with an abundance of fresh cherries that I was told were picked nearby. Below is a picture of the cherry vanilla, alongside a scoop of Butterfinger ice cream. 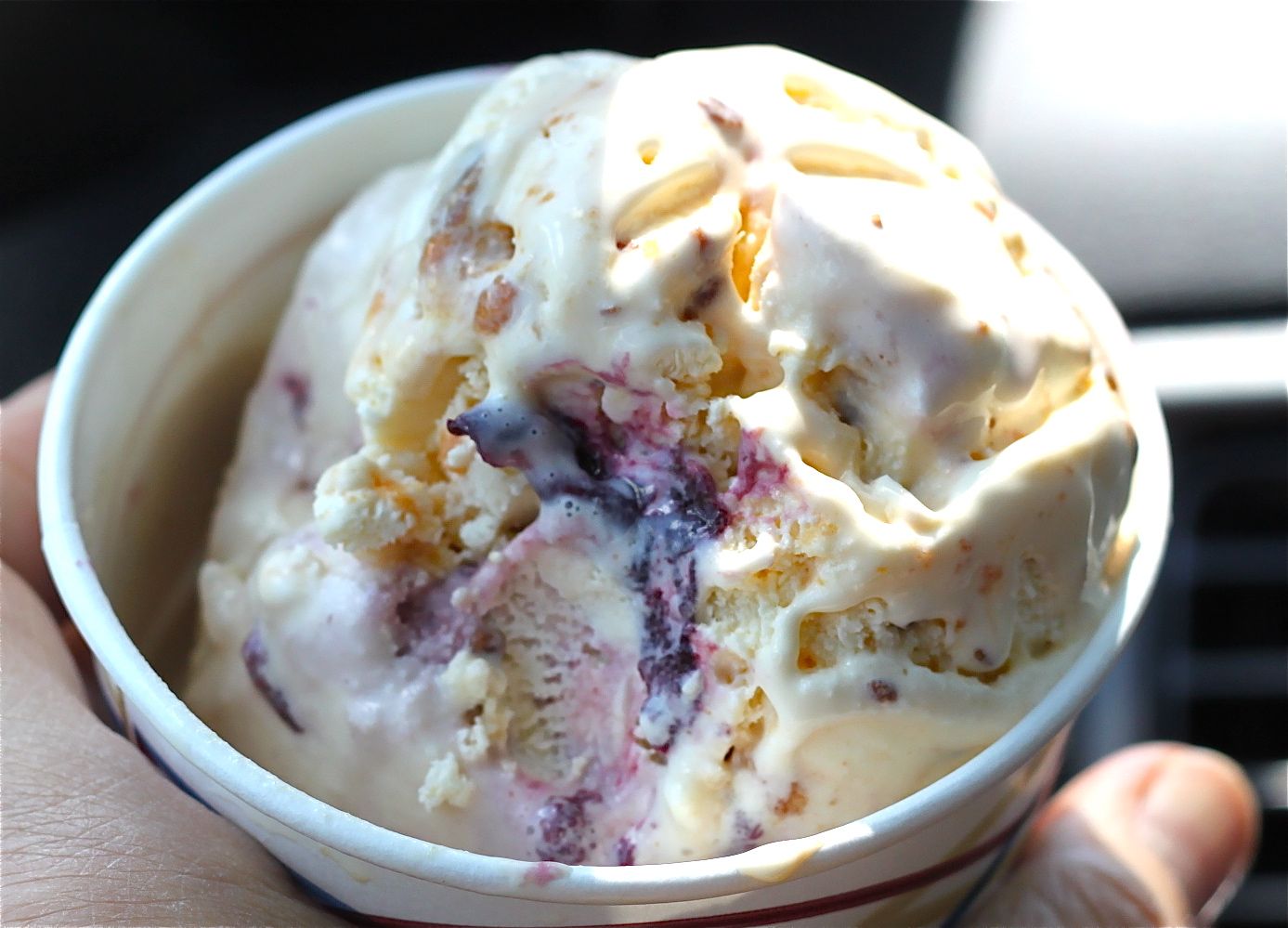 The cherries were sweet and flavorful, and the ice cream itself was redolent of fresh cream — a glorious moment of early summer in the Hudson Valley translated into a dessert as fleeting as the season. 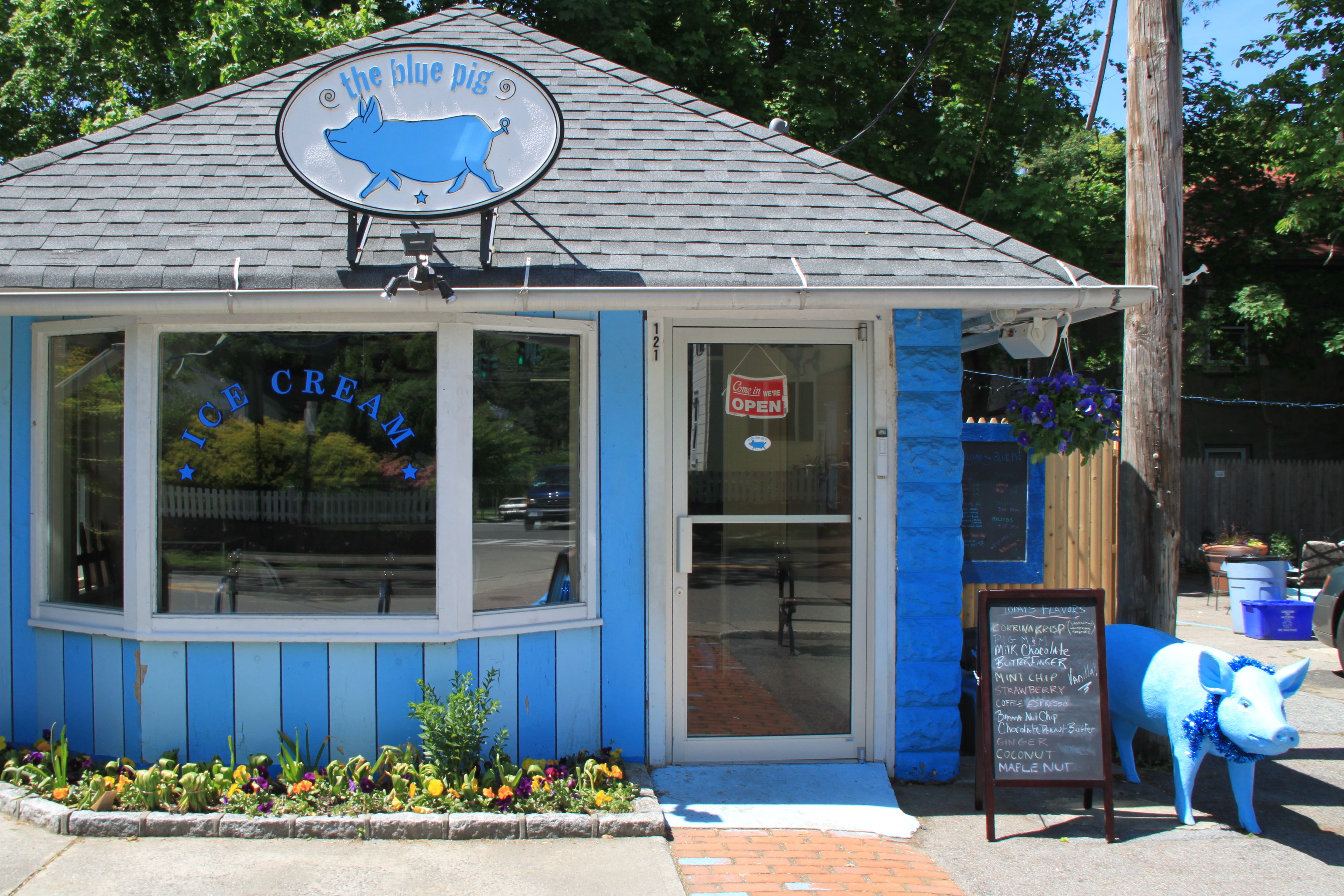