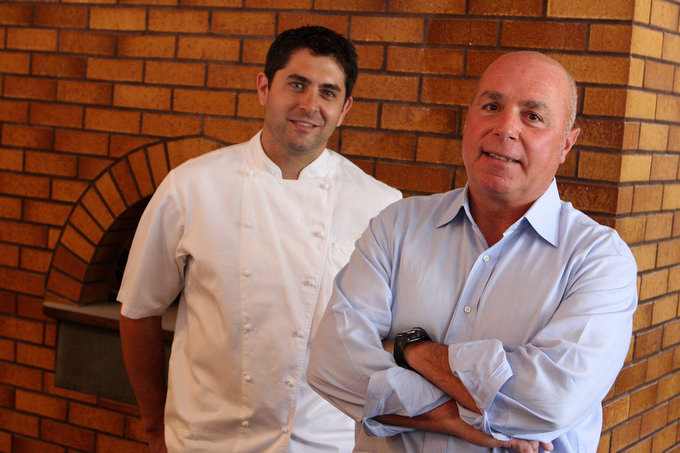 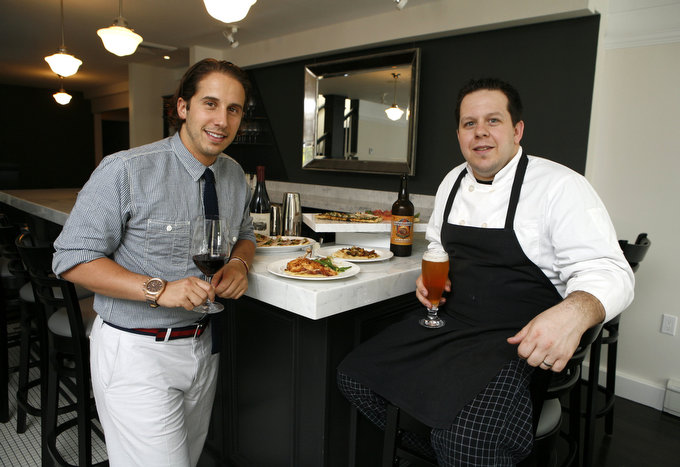 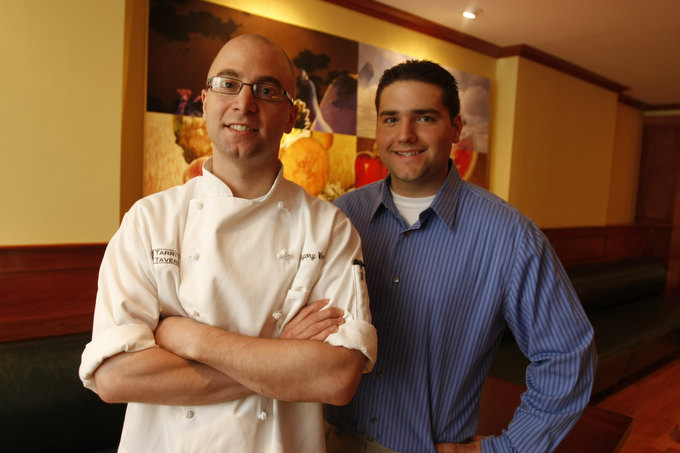 And Moderne Barn in Armonk! 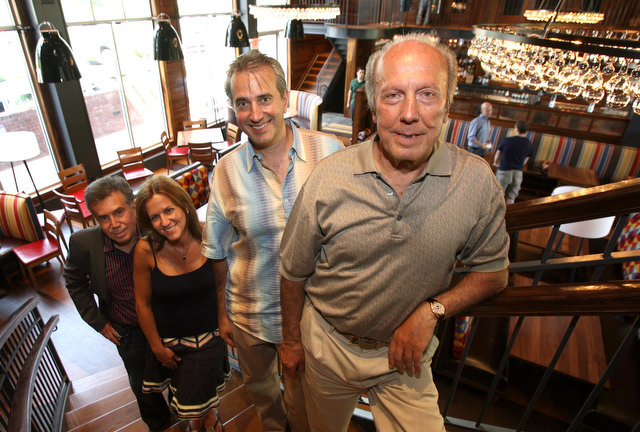 Four fantastic-sounding restaurants will open this summer in Westchester, and Linda Lombroso has a fabulous story in today’s paper about these new spots that are bringing New York City cuisine to the burbs. Check it out, after the jump.

In a move echoing the northward trek of Mario Batali, Joe Bastianich and Andy Nusser, a handful of Manhattan chefs and restaurateurs are setting their sights on Westchester this summer — and like Tarry Lodge, they’ll offer upscale-casual dining at moderate prices.

By summer’s end, you’ll find two new spots in Armonk (Restaurant North and Moderne Barn), one in Tarrytown (Tarry Tavern) and another in Port Chester (Arrosto), all with connections to the New York restaurant scene.

In many ways, it’s a win-win for the diner: You’re getting top-chef talent without paying top dollar — and at these restaurants, families with children are welcome, even if they show up straight from the Little League field.

“Targeting a lower check average is a sane response to this crazy economy,’’ says Paul Frumkin, deputy managing editor of Nation’s Restaurant News. “A lot of people just don’t have the kind of money to spend on dining out that they had three years ago. So more power to anyone who can offer great food at lower prices.”

Opening first are the two restaurants in Armonk: Moderne Barn, which opened yesterday (owned by the Livanos family, whose restaurant group owns Oceana, Molyvos and Abboccato in Manhattan and City Limits Diner in White Plains), and, later this month, Restaurant North, which will open Tuesday (owned by chef Eric Gabrynowicz, formerly of Tavern of the Highlands Country Club, in Garrison, and wine director Stephen Mancini, previously at Maialino).

Gabrynowicz and Mancini are alums of Danny Meyer restaurants in Manhattan; they met at Union Square Cafe about five years ago.

Although Mancini, who grew up in Scarsdale, has fond memories of “super awesome” birthday dinners with his parents at places like Lusardi’s, in Larchmont, and La Panetiere, in Rye, he wanted to create a restaurant that captured the modern energy of Manhattan.

He laughs when he talks about the “4-foot pepper mill that hangs out in Westchester” and seems to pop up everywhere.

“That’s the trademark of an old-school approach to dining,’’ he says. “That’s OK and that’s great, but I always say, with the demographic up here, there’s an opportunity to do more.’’

As he did at Tavern, Gabrynowicz plans to offer a “refined farm-to-table New American menu” with a focus on seasonal, local ingredients; one of the highlights will be a pork Porterhouse prepared from pigs from Heritage Foods, a Brooklyn-based purveyor that promotes small family farms. 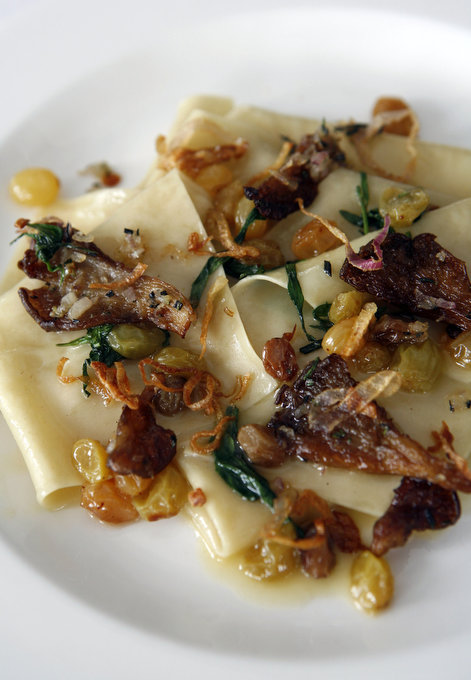 “Everything in their philosophy is rooted in taking care of the animal,’’ says Gabrynowicz. “You want to eat a happy pig, don’t you?”

Restaurant North will also have a children’s menu — sans chicken nuggets — that will feature three courses for around $15, so that kids can mimic their parents’ dining experience.

At Tarry Tavern in Tarrytown, in the site last occupied by Lago Di Como on Main Street, chef Gregory Vernick (who left behind a position with Jean-Georges Vongerichten) is joining forces with Henry Cabral, whose family owns Caravela, also in Tarrytown. The duo gutted the restaurant and redesigned it to feel like a homey tavern, but one that focuses on seasonal farm-to-table food.

“If a tomato is not in season and someone is growing a great radish 20 miles away, I’m going to drive up and grab the radish myself,’’ says Vernick, who also plans a backyard herb and vegetable garden, and intends to make his own ketchup, mustard, pastrami and cured salmon.

Inspired by Gramercy Tavern in Manhattan, Cabral’s tavern will offer a bar menu and a regular menu, both available to diners no matter where they sit. Choices will include burgers, flatbreads, pizza, sausages, meats and fish.

“Everything is going to be under the umbrella of a rustic tavern,’’ says Vernick.

Although he moved recently to Tarrytown, Vernick already has a feel for the Westchester community — and no qualms about satisfying diners’ requests. “I don’t think it gets more difficult than New York, as far as clientele goes,’’ he says. “The focus is not about me and my vision. We want to make food people crave.”

In Port Chester, where they’re still putting the finishing touches on Arrosto (in the former Hostaria Mazzei, on South Regent Street), Godfrey Polistina and chef Shea Gallante are also eager to satisfy the local demand for New York-style dining.

“I have three girls and they’ll eat anything, but that doesn’t mean I want to go out and spend $50 or $75 for a 10- or 12-year-old,’’ says Polistina, who grew up in Port Chester and was a founding partner at Carmine’s, Virgil’s and Ouest, in Manhattan. “Here, you have … the families, the business people, the couples, so you have to be very approachable. With the kids, where do you go when Daddy still wants a nice martini or a nice glass of wine and something substantial?”

The menu, says Gallante (previously at Felidia, Bouley and Cru), will feature grilled meats and seafood, along with pastas and pizza prepared in a wood-burning oven.

“After I had kids, I?grew a soft spot for pregnant women and people with a young child,’’ says Gallante, who has a five-year-old and 19-month-old twins. “What kid doesn’t eat white food: pasta, pizza and bread? So we’re going to have more than enough choices to accommodate young children.” But white doesn’t have to mean bland: Gallante promises some fresh pastas that will be made from smoked flour — and cakes created by pastry chef Bjorn Boettcher, formerly of Daniel and Bouley.

Arrosto will also have an adjacent market with take-out versions of selected dishes from the menu.

The Port Chester location made a lot of sense, says Gallante, who lives in Ardsley. “It’s rapidly becoming the food mecca of Westchester County, so it’s not like we’re treading into uncharted territory, trying to create something that never existed.”

When chef Andy Nusser opened Tarry Lodge in Port Chester two years ago, with Batali and Bastianich, a move out of Manhattan seemed inevitable. “It was a difficult time for the city and everything was very expensive,’’ he says. “From my association with people who lived in Westchester, most of them worked in the city and knew the city restaurants, and they all had great appetites and good taste, so it seems kind of silly that you wouldn’t want to try to tap into that clientele and do it in Westchester.”

For Nick Livanos, the sudden influx of Manhattan culinary talent is not so much a trend as a matter of good timing — and makes perfect sense, considering many chefs and restaurateurs live in the Lower Hudson Valley. “We work very hard, so there’s nothing more pleasurable than doing something in your backyard,” he says.

Gabrynowicz, who doesn’t miss the bustle of Manhattan, still yearns for its community of chefs. But he’s already taking advantage of old connections: Earlier this month, he called on Michael Cutney, chef at Cafe of Love in Mount Kisco, for a degreasing product to use in his new kitchen. The pair had worked together at Union Square Cafe.

He’s looking forward to establishing new ties as he deepens his roots north of the city. “I want Peter Kelly to come to my restaurant and I want to know what goosenecks David DiBari is cooking, and I want him to come in and have a glass of wine at the bar,’’ Gabrynowicz says. “That camaraderie is amazing and it’s huge in New York City.?I think Westchester is on the cusp of creating its own, and it’s going to be incredible.”