People are reading
You are at:Home»Restaurants»First Look»Restaurant North in Armonk: First Taste

I don’t say this about too many restaurants, but I walked out the door of my meal at North last week plotting my immediate return. This is not a real review — the restaurant had only been open 6 days when I went, and I’ve gotten to know chef-owner Eric Gabrynowicz over the years, so it’s hard to be impartial — but my first impressions of this new farm-to-table restaurant are this: North could quickly become a dining destination for people all around the Lower Hudson Valley and the region. The food and the wine are that good.

And yet. It’s still a neighborhood restaurant, with just 45 seats and a casual, airy vibe. You could go there, sit at the bar, and order a flatbread with wild mushrooms and lardo and a glass of Burgundy — as my friends and dining companions Derek and Carol Todd of Wine Geeks, the wine shop down the street, swore they’ll be doing at least once a week. Or you could call ahead to request a 8-course tasting menu — as chef Eric prepared for every single table of his friends and family in the restaurant after just three nights of practice service.  (He opened to the public two days later.)

The restaurant sort of just popped on the scene all at once — no beleaguered delays; no problems with permits. Eric left Tavern at the Highlands Country Club in Garrison in May, and he and partner Stephen Mancini, the general manager, gutted the former La Scala restaurant at the corner of Main and Bedford Road in downtown Armonk. 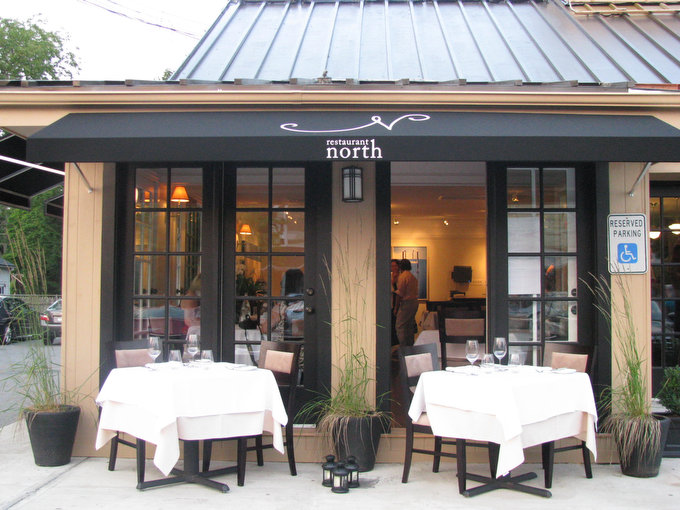 They installed French windows that open to the sidewalk. They put in new floors, painted the walls, and installed a marble bar. 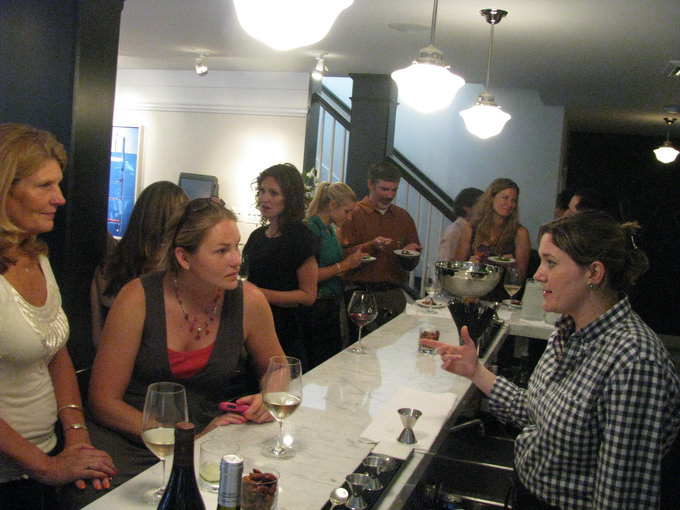 And they comissioned this waist-high walnut table to separate the bar area from the dining area: 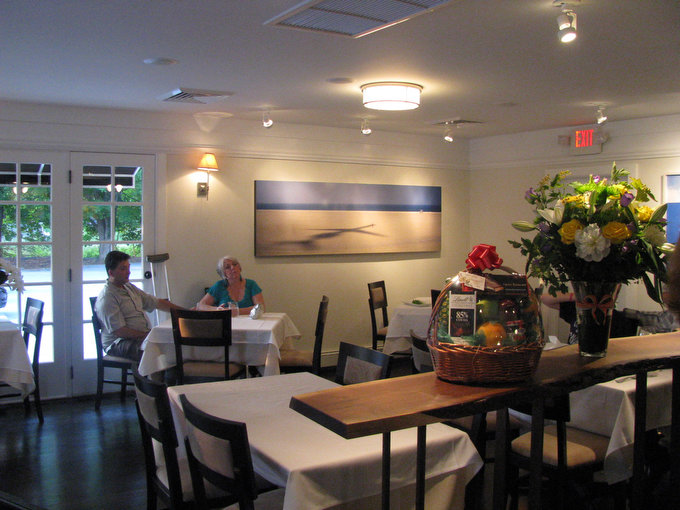 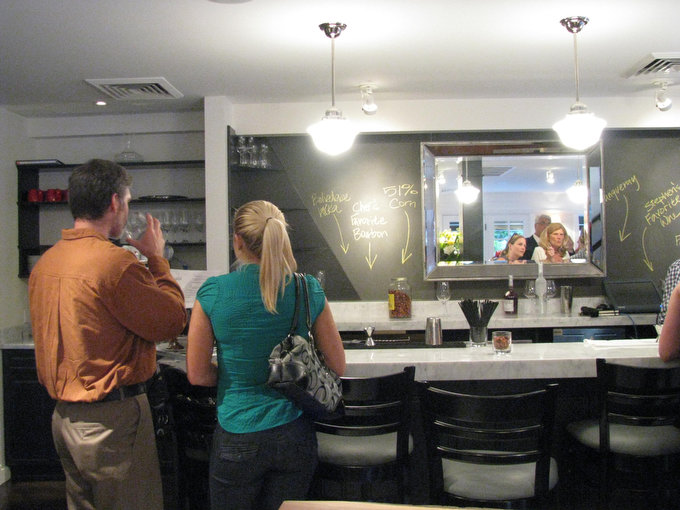 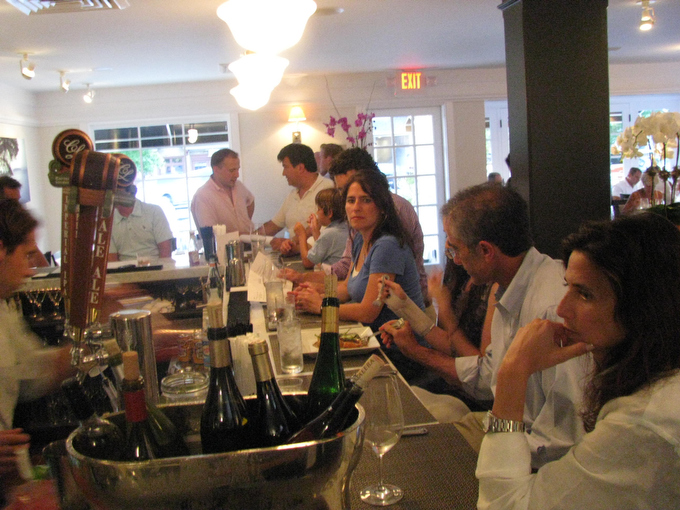 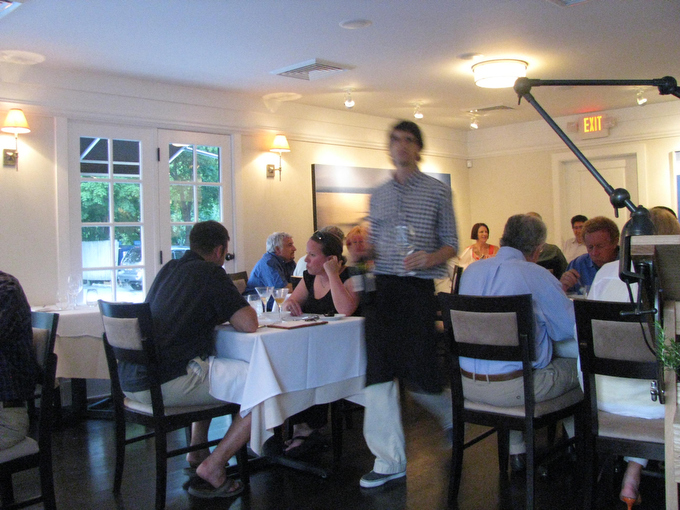 The restaurant opened on June 29 and has been full ever since.

One of the reasons I’ve gotten to know Eric so well is because he’s a chef who believes in celebrating the bounty of the Hudson Valley — as I do. He’s always been cooking great food — I realized soon after I my first meal at Tavern at Highlands Country Club about three years ago. There, he bought whole sides of cows from Meiller’s Farm in Pine Plains, N.Y., sourced his organic vegetables from Blooming Hill Farm in Orange County, and made hearty, manly dishes gutsy enough sure to satisfy brawny guys in the heart of a cold winter.

Not that you couldn’t find sophisticated flavors, too. It’s just that now, here at North, they’re more refined — more elegant. And he’s still committed to using local ingredients on his menu at the peak of their prime. The day I dined at North, Eric had driven from his home in Beacon to Sycamore Farms in Middletown, N.Y. to pick up the first of the local corn. He cut it off the cob to make a succotash of sorts, using just-warmed blueberries (of all things!), which popped open and bled blue into the sea of yellow, crunchy, sweet kernels mixed with silky polenta from Wild Hive Farm in Colombia County. On the top, a Long Island duck breast from Crescent Farms, simply seared. 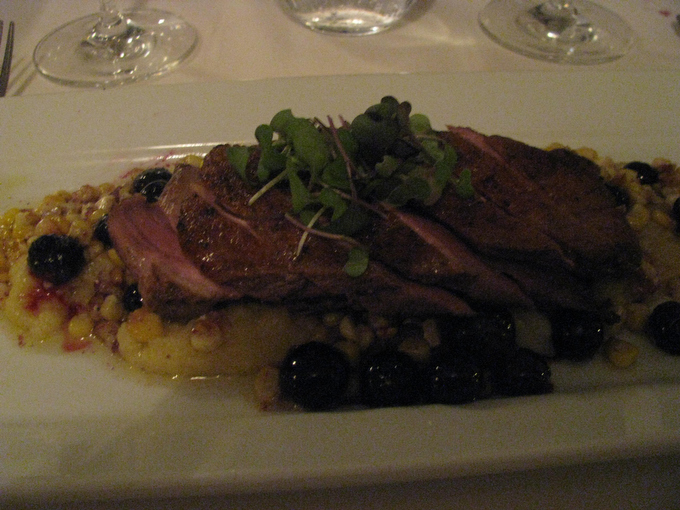 The wine was a huge part of the success of my meal. If you’ve never had a meal where a wine made a difference, I urge you to get to North before the summer’s over. (Heck before the month is over. ) You will be shocked and amazed at how much more enjoyable your meal will be — not to mention tastier — once you’ve had someone with experience pair your wines with your food.

Here’s owner-GM Stephen Mancini on the left. He was formerly the wine and spirits director for Union Square Cafe and Maialino, two of Danny Meyer’s restaurants in Manhattan. (And that’s Carol Todd, owner of Wine Geeks on the right.) 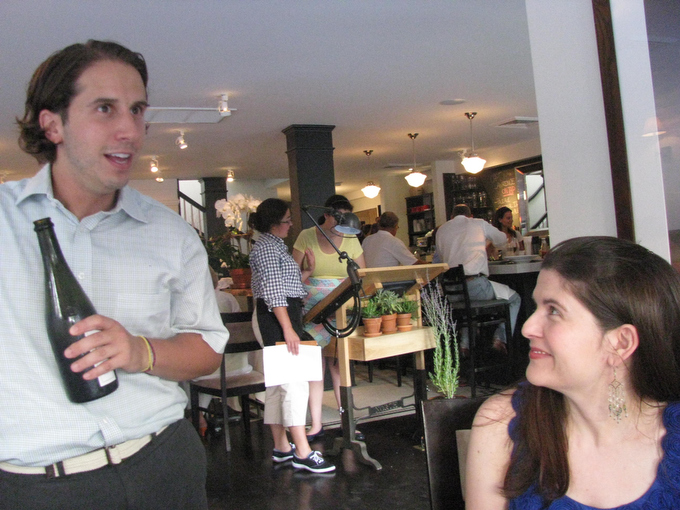 See that far-away look in Stephen’s eyes? It’s how he gets when he talks about the wines on his list: excited, passionate, and yet articulate. That look is really just him pulling the absolutely perfect adjective out of his vast wine vocabulary. This is not to say he’s snobby about it. If the right description for a wine is him fidgeting with delight? Then that’s how he’ll describe it.

And so that’s how my meal last week went. Great food, great wine — with just a minor slip-up from the kitchen (too much salt on the salmon) and the service (waiting too long for plates to be cleared). More photos of the food — and descriptions of the wines — after the jump.

When I arrived at 7:30 for my reservation, the bar was completely packed — and everyone was eating. I stopped by North last week on my way home from another meal and it was the same thing. One guy at the bar told me he’d been waiting for an hour and a half before he could sit down. But Eric says sometimes there’s a lull, and you might get lucky. Take my advice: if you want to eat at North without a reservation, then get there early. 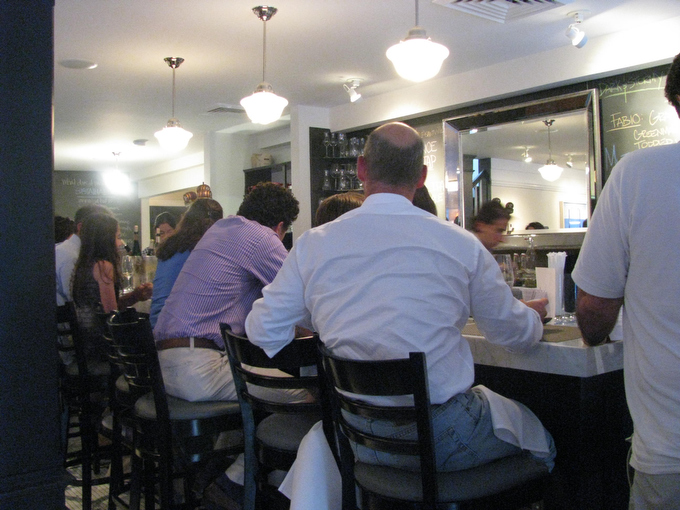 Even with the crowd at the bar, the restaurant wasn’t loud or uncomfortable in the dining room. The tables and chairs are luxurious and the artwork  — on loan from photographer Stephen Wilkes — is beautiful without being distracting. 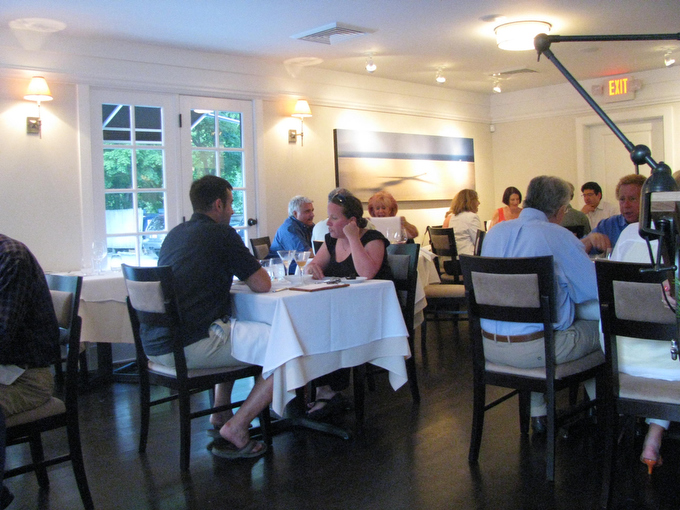 We started with an aperitif of Vouvray Petillant Brut 2005 Domaine Huet and a pumpernickle roll with blueberry butter: 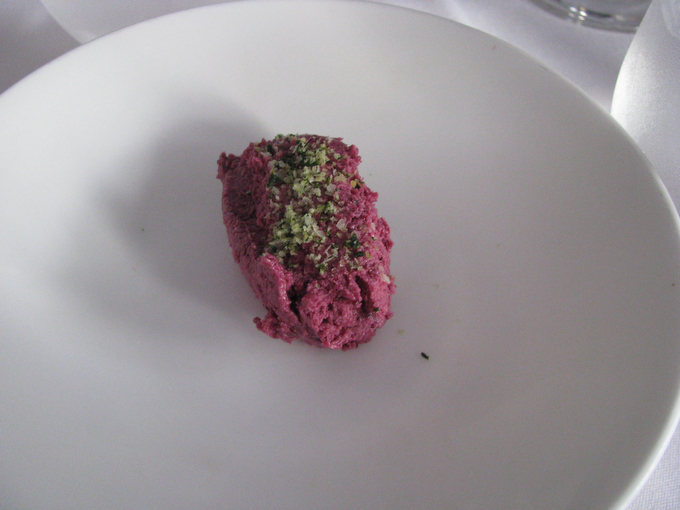 The wine was a wow and the butter just so creative. Such a nice way to let us know that we’re in for a fun night. 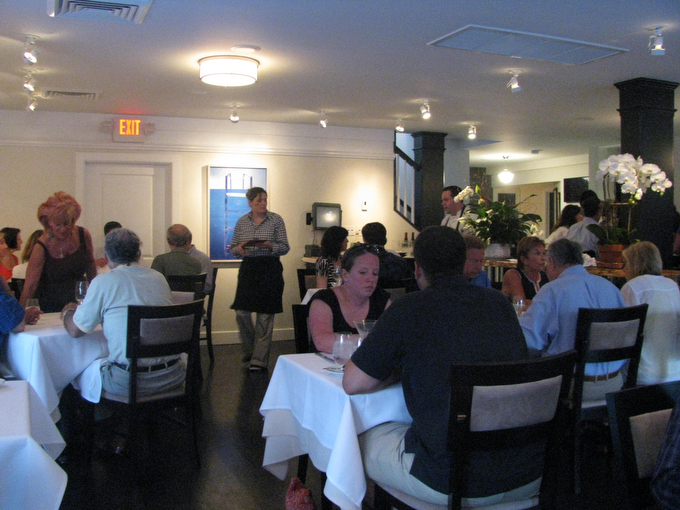 The menu, which I’ll include at the end of the post, is divided into sections with ellipses. Appetizers are either “Chilled…” or “Warming…” Then there are Pastas…  Grilled Flatbreads… Sea… Land… and Earth…

A good way to taste from several “Areas…” is to order a flatbread for the table, then get individual appetizers and entrees. We did that, but Eric sent out more than one flatbread so we could sample. Stephen paired Calera Vin Gris of Pinot Noir 2009 — a lovely, bright rose. 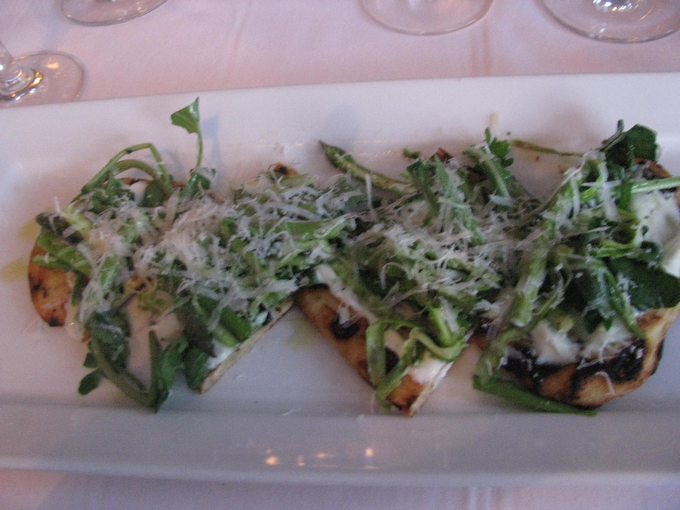 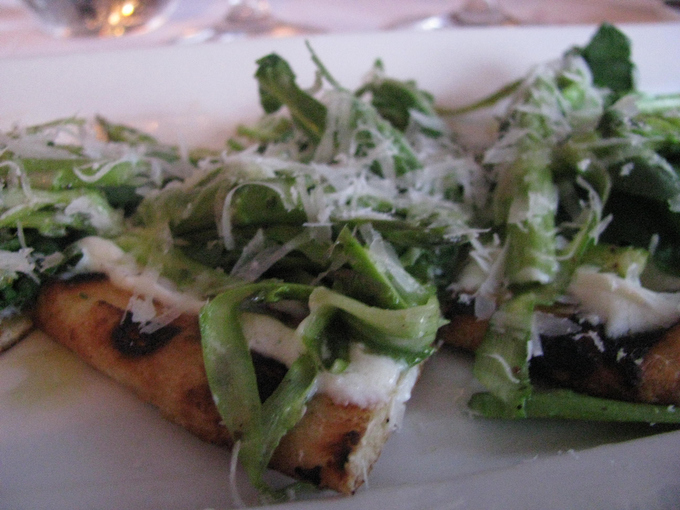 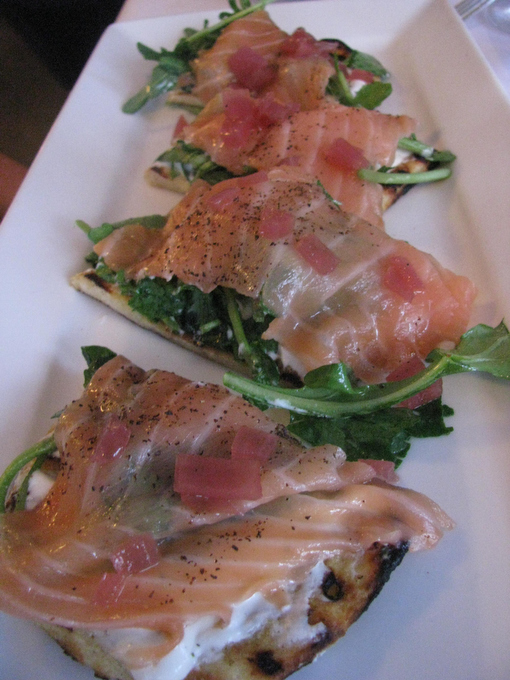 And here’s the one we ordered, Wild Mushrooms, Truffle, Lardo ($16): 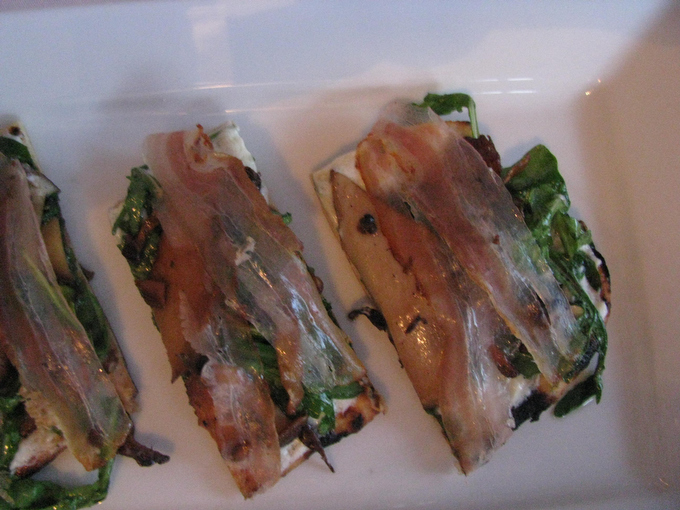 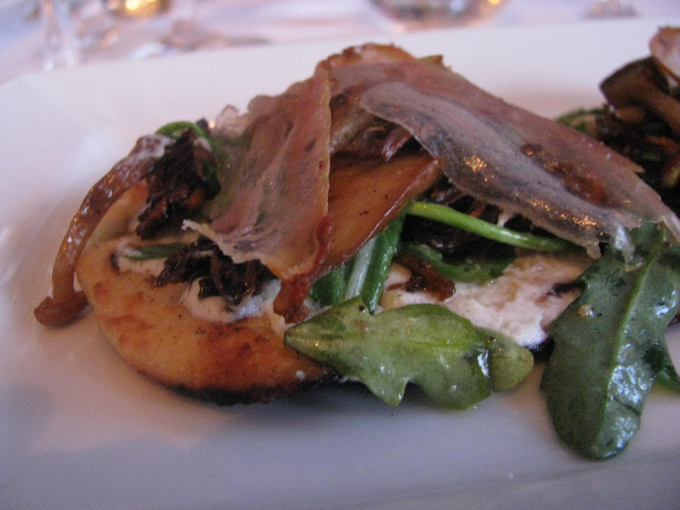 All were great. The dough, pizza-like, was crispy and thin, except on the asparagus one, where it had gotten a little too wet from the toppings. The combinations of flavors were satisfying and balanced. We knew we had a lot of food coming and it was hard not to finish every single bite. 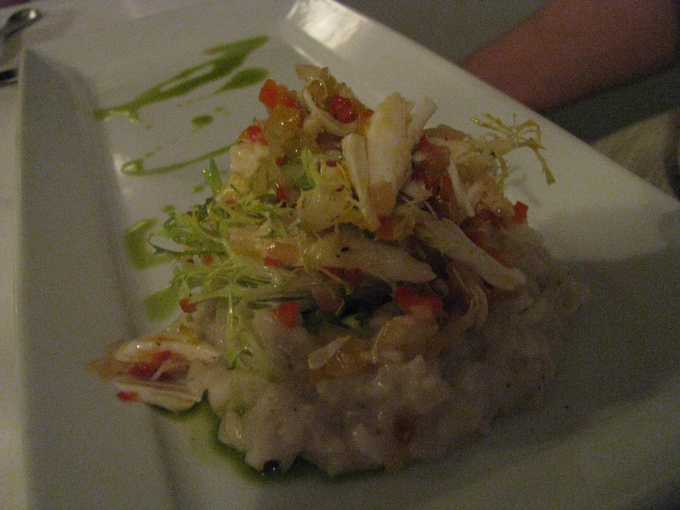 Creamy and rich, but the acidity of the tomatoes and the cool temperature of the sweet crab gave it great balance. And that’s leek oil (!) on the side.

I was worried that this app, Rancho Gordo White Bean Fagiole with Golden Cockles, Speck ($11) — 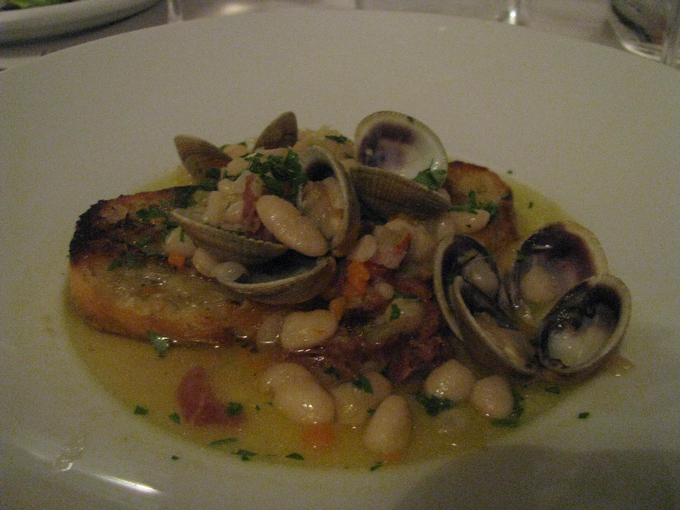 — was going to be too stew-like on a hot summer night. Instead, it was like a terrific mix of a white bean crostini and clams on the half shell. I sopped up every last bit.

With both of these, Stephen poured a Montlouis sur Loire Sec Chidaine 2008. 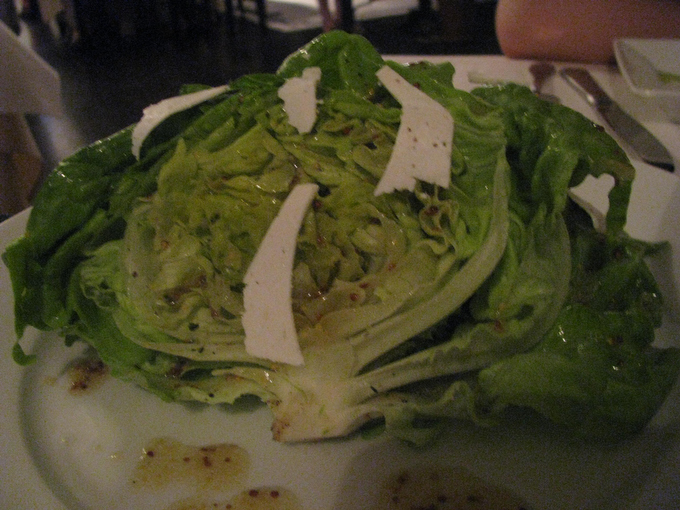 — was safe, but nonetheless delicious. Fresh as a whip, with contrasting flavors and textures.

But the winner of the round was this amazing creation: Steamed PEI Mussels with Strawberries, Fennel, Tarragon, Lamb’s Quarter, Quinoa, Tequila ($15): 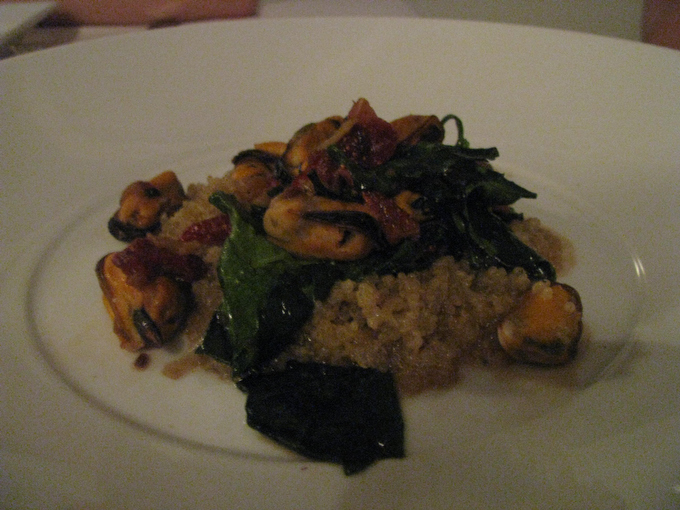 If it sounds like some crazy combination you might find on “Chopped!”, you’d be right. Eric was at his local pub and the show came on the Food Network. As they ticked off the ingredients in the mystery basket — mussels, strawberries, fennel, striped bass— his mind started working: OK, I would put this with that, saute this and steam that and come up with something great. His only downfall was the last ingredients in the basket: marshmallow. (Thank goodness he didn’t include that.)

Instead, he came up with a completely original combination. He dehydrates strawberries in a low oven, then when he cooks them with mussels and tequila, they are rehydrated, but with a deep, concentrated flavor. It’s a fabulous combination with the mussels and the quinoa. It’s good to be stretched sometimes, isn’t it!

With this interesting combination — and with the salad — Stephen matched a glass of Krug Grande Cuvee Non Vintage. At $25 a glass, it’s very expensive, but I think worth it if you weight that against buying a bottle — even at the wine shop, it’s $200. Here, you get to experience something you might not otherwise be able to afford.

For our main courses, we had Pan Roasted Chatham Cod with Vichyssoise, Asparagus, Olives ($24): 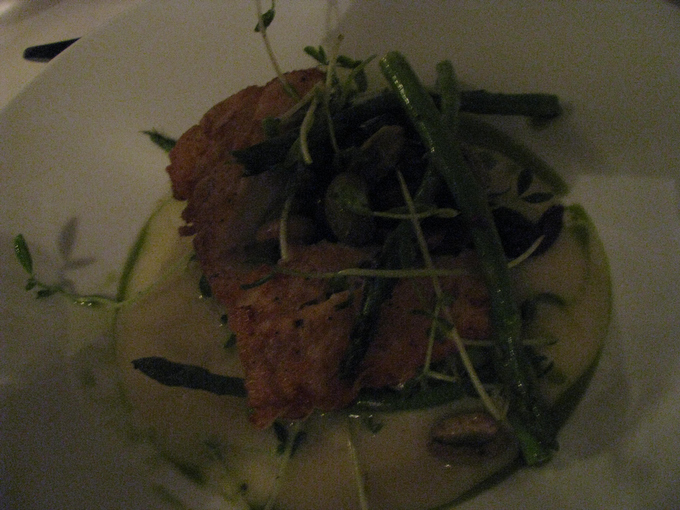 Flaky fish with a crisp outside, bright vegetables, creamy broth. The potato leek soup was served at room temperature — not chilly like a normally vichyssoise. Stephen matched a Mary Elke Pinot Noir 2008. 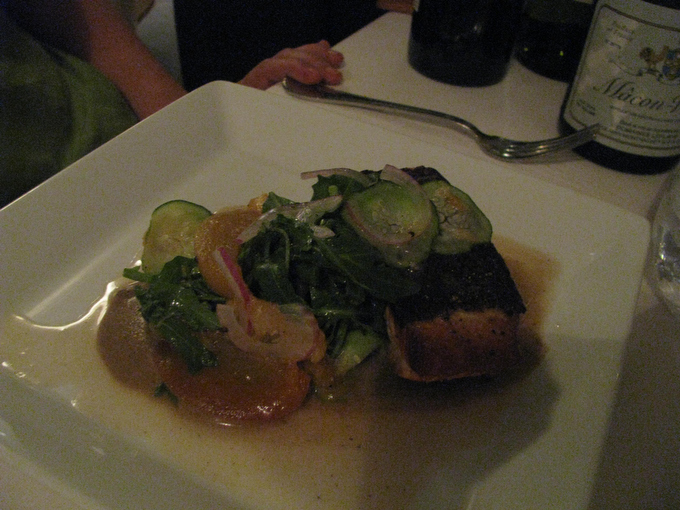 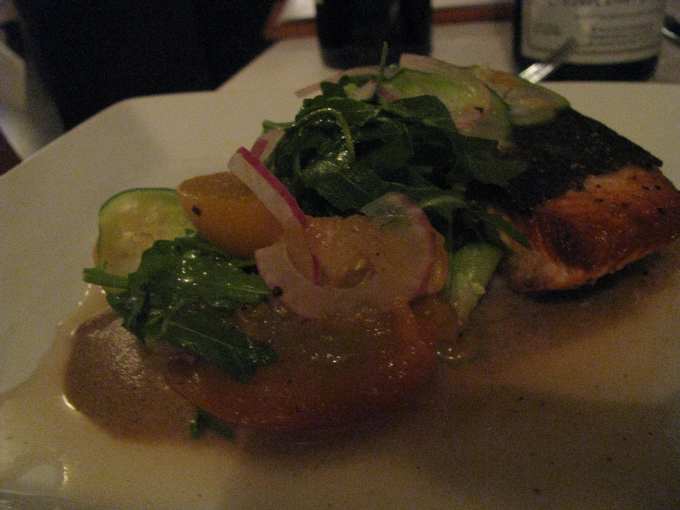 The peaches were ever-so-slightly pickled and so had a nice firm bite on the outside, then gave way to a sweet and succulent inside. The only problem here was the salmon skin — it was over-seasoned and made us pucker. To drink, we had a Frappato 2009 Valle dell’Acate. 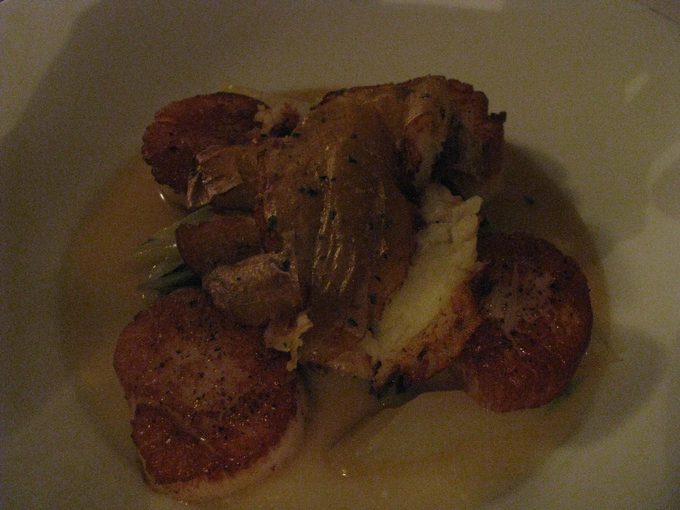 The scallops were seared so crisp but yet were juicy and firm. The crispy skin on the potatoes made us wonder how they were done, and Eric told me later: boiled, then chilled, then smashed and then fried. Then tossed in rosemary salt and Paulie Garlic. (You know, like Paulie from Goodfellas? Sliced so thin you might use a razor blade?) With this, Stephen matched a Macon-Verze 2008 Domaines Leflaive.

As much as I can recommend these dishes, I can’t guarantee they’ll be on the menu when you go to North. The asparagus is gone; so the cod is now served with summer beans — though tomorrow it might be with proscuitto and curried puree of crenshaw melons. Next week, the dish might be completely different. After all, the farmers market is at the height of the season right now.

And I hate to even mention it, but if I don’t, you’ll wonder if I found even one thing wrong with my experience at North: Our service was professional, friendly, knowledgeable, confident and never intrusive, but our meal was long and we did have to wait quite a while between courses with dirty plates in front of us. I’m sure, with more practice, this will change.

The most exciting thing about North is not that it’s a work in progress; all new restaurants are that. North is different. It’s a work in motion.