People are reading
You are at:Home»Recipes»How to Throw a Mad Men Party: Recipes, Cocktails and More

I have a story in today’s paper that gives you everything you need to know about throwing a Mad Men viewing party. 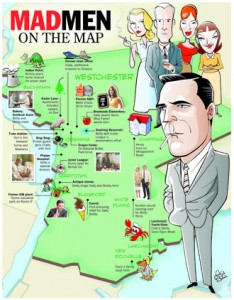 I’ve taken a page from Betty’s dinner party in Season 2, mixed it with a few Sterling Cooper products and slogans and thrown in a dash of alcohol here and there.

Here’s a look — with recipes for Old Fashioneds, Rumaki, Gazpacho Shooters, Lamb Lollipops, Swedish Meatballs and Molded Lime Sherbet. What a winner of a meal!

Plus, check out Chris Serico’s story, map and video about the local references to Westchester on “Mad Men.”

(Click the map at right, an illustration by the talented Chris Brown, to see a larger version.)

Skinny tie? Got it.

So all you need now to host a proper “Mad Men” viewing party are a few catchy slogans and a 1960s menu.

We’ve got you covered, from cocktails made with Stoli (favored by agency head Roger Sterling, who got a sample of the Russian vodka, which was not yet sold in the U.S.) to snacks of Utz Potato Chips (the product pitched by Jimmy Barrett), and an around-the-world menu of finger foods inspired by a dinner party held by Betty Draper herself. We’ll throw in a few jingles, too.

Season 4 of the Emmy-winning series, which stars Jon Hamm as the debonair Madison Avenue exec Don Draper, premieres on AMC at 10 p.m. July 25, and that leaves plenty of time for cocktails beforehand.

Start with Old Fashioneds, Don’s drink of choice. He drinks an old-fashioned Old Fashioned, without fruit in the bottom, but we’ll give you recipes for both types.

Not everyone likes bourbon, so have a few other “Mad Men” favorites on hand, including Sterling’s Stolichnaya, which you can serve with soda or shake with Vermouth to make martinis, and Heineken beer, which the agency represented and Betty served at her party in Season 2. (She also served Burgundy “from France,” but you can pour your favorite pinot noir from anywhere.)

With your drinks, set out bags — not bowls, mind you — of Utz Potato Chips. Announce to your guests the slogan, “Utz are better than nuts,” and pray that they don’t behave as Barrett did while filming one of Sterling Cooper’s commercials for the product — and stick their whole face in the bag.

For dinner, serve Betty’s menu (mostly), but with a twist: no forks. Her international dishes included rumaki (which she said was from Japan) and gazpacho (which really is from Spain). Rumaki, a Hawaiian-inspired dish of chicken livers and bacon made popular by Trader Vic in the 1960s, goes on toothpicks. To make our soup just as easy on your guests, serve it in shot glasses.

The next stop on Betty’s world tour was Dutchess County, for a leg of lamb, and Germany, for egg noodles. We’re going to take some liberty here and offer these alternatives: lamb lollipops and Swedish meatballs. Give the lamb a retro edge by serving it with a Green Goddess-Mint dipping sauce. And the meatballs? Well, they fit Betty’s theme, fit with the era and — well, on any other day, you might serve them with those egg noodles. Offer the lamb or the meatballs — or both, if you’ve got a hungry crowd.

We don’t know what Betty served for dessert that night, but we’re going to offer an idea that would represent the 1960s well: a molded sherbet. Lime has just the right feel, we think, and it’s a refreshing and chilly ending to what is sure to be an intense night of television viewing.

And when the evening’s over? In case your guests overindulge, send them home with individually wrapped tablets of a product that has one of the 1960s most memorable ad slogans: Alka Seltzer.

We’re not sure Don would approve, but we’re just going to put this out there: “Plop plop fizz fizz, oh what a relief it is!”

Lemon peel, cut from a whole lemon, leaving any pith on the lemon

Place the sugar cube in the bottom of a rocks glass. Shake the bitters over the cube and add the club soda. Muddle together to crush the sugar cube and blend the bitters and soda together. Add the whiskey, give it a stir, add the ice and give it a stir. Twist your lemon peel over the drink so the oils spray into it, rub it along the rim of your glass and drop it in the drink.

Spear an orange slice and two cherries with a toothpick. Place the sugar cube in the bottom of a rocks glass. Shake the bitters over the cube and add the club soda. Muddle together to crush the sugar cube and blend the bitters and soda together. Add 2 cherries and 1 orange slice. Muddle those to just crush them. Add bourbon, stir. Add ice and stir. If your guests prefer, add another splash of soda. Garnish with the cherry-orange toothpick.

Remove livers and chestnuts from marinade and discard marinade. Place 1 piece of bacon on a work surface and put 1 piece of liver and 1 chestnut in center. Wrap bacon around liver and chestnut and secure with a toothpick.

Broil rumaki on rack of a broiler pan 2 inches from heat, turning once, until bacon is crisp and livers are cooked but still slightly pink inside (unwrap 1 to check for doneness), 5 to 6 minutes. Serve immediately.

Salt and pepper, to taste

Chop all the vegetables into large chunks. Place in the bowl of a food processor. Add olive oil, vinegar, salt and pepper and puree until smooth. Strain through sieve into a bowl. Refrigerate until cold, up to 3 days. Before serving, stir and strain again, then pour into individual shot glasses.

For truly retro look, serve in a chafing dish.

From Alton Brown, via FoodNetwork.com

A pinch plus 1 teaspoon kosher salt

Tear the bread into pieces and place in a small mixing bowl with the milk. Set aside.

In a 12-inch, straight-sided saute pan over medium heat, melt 1 tablespoon of the butter. Add the onion and a pinch of salt and sweat until the onions are soft. Remove from the heat and set aside.

In the bowl of a stand mixer, combine the bread and milk mixture, ground chuck, pork, egg yolks, 1 teaspoon of kosher salt, black pepper, allspice, nutmeg, and onions. Beat on medium speed for 1 to 2 minutes.

Heat the remaining butter in the saute pan over medium-low heat, or in an electric skillet set to 250 degrees. Add the meatballs and saute until golden brown on all sides, about 7 to 10 minutes. Remove the meatballs to an ovenproof dish using a slotted spoon and place in the warmed oven.

Once all of the meatballs are cooked, decrease the heat to low and add the flour to the pan or skillet. Whisk until lightly browned, approximately 1 to 2 minutes. Gradually add the beef stock and whisk until sauce begins to thicken. Add the cream and continue to cook until the gravy reaches the desired consistency. Remove the meatballs from the oven, cover with the gravy and serve.

While the lamb is marinating, place scallions, cilantro, mint leaves, macadamia nuts, vinegar, olive oil, and water in the jar of a blender; season with salt and pepper. Blend until pureed. Refrigerate until serving.

Preheat grill or a grill pan over medium high heat.

Remove lamb chops from marinade, wiping off any excess, and place on grill. Season with salt and pepper, and grill, rotating lamb chops 1/2 turn after 1 minute, and continue grilling until cross-hatch marks form, about 1 minute more. Turn lamb chops and repeat process on opposite side. Transfer chops to a warm plate and let stand at least 3 to 5 minutes before serving with dipping sauce. They would also be tasty at room temperature.

From Taste of Home magazine

In a large bowl, dissolve gelatin in boiling water. Stir in sherbet until well blended. Chill until syrupy.

Spoon whipped topping into a large bowl. Gradually beat in the gelatin mixture on low speed until well blended. Pour into a 12-cup mold coated with cooking spray. Refrigerate for 6-8 hours or until set.