People are reading
You are at:Home»Restaurants»Openings»Piri-Q Opens in Mamaroneck

Piri-Q, a new Portuguese chicken house, opened in Mamaroneck over Fourth of July weekend. Chef-owner Rui Correia, formerly the chef at Oporto in Hartsdale, is making traditional butterflied chickens, roasted over an open-fire wood charcoal grill, and serving it with piri-piri sauce. 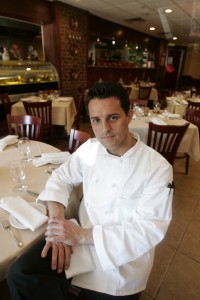 It’s like piri-piri meets barbecue. (Hence, the name.) Piri-piri sauce is a made with roasted malaguetas, a red pepper well-known in Portugual. Rui adds a couple different kinds of vinegars and some other secret ingredients. It’s like a Portuguese version of Tabasco, but with more depth than that.

Rui, who also owns Duoro in Greenwich, Conn., decorated the restaurant to make you feel as if you’re in an outdoor alleyway in Portugal. There are terra cotta roof tiles that meet in the center of the room; brown and beige earth tones stucco the walls like the outside of a house, and there are a few fake windows and cobblestones, so you feel like you’re walking through the streets.

Besides chicken, Rui is serving ribs, salmon, paella, and seafood. There are also an assortment of appetizers, including shrimp and chorizo; spicy meatbaslls; housemade humms; and potato fritters. The lunch menu includes pita wraps and sandwiches.

The restaurant is waiting on its liquor license. Once it has that, Rui will serve beer, wine and sangria.

A 2007 photo of Rui at Oporto by Seth Harrison, right.