People are reading
You are at:Home»Food Links We Love»Great Moments on the Grill: A Pig Roast at Lake George

Robert Ricci of Central Nyack sent in his of a pig roast at Lake George.

He says: “Our first pig roast. My friend Ross is on the left and I am on the right. Ross is marinating and I am checking temperature. When done, pig was so tender all you really needed was a fork to separate it.” 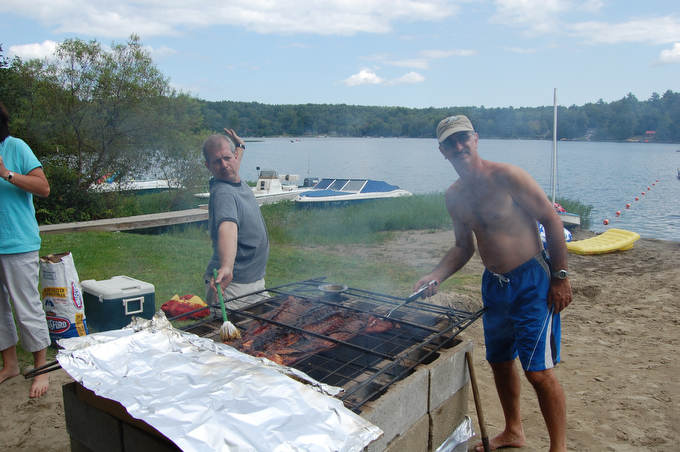 More photos of the pig roast, after the jump.

For this one, he says “Flipping the pig. I made the BBQ grate from scratch”: 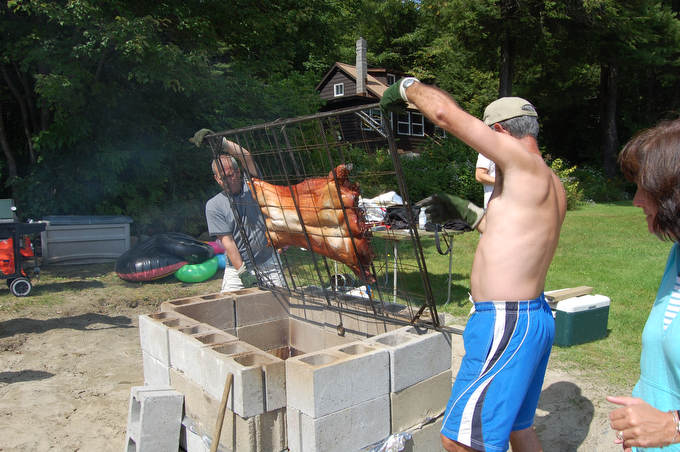 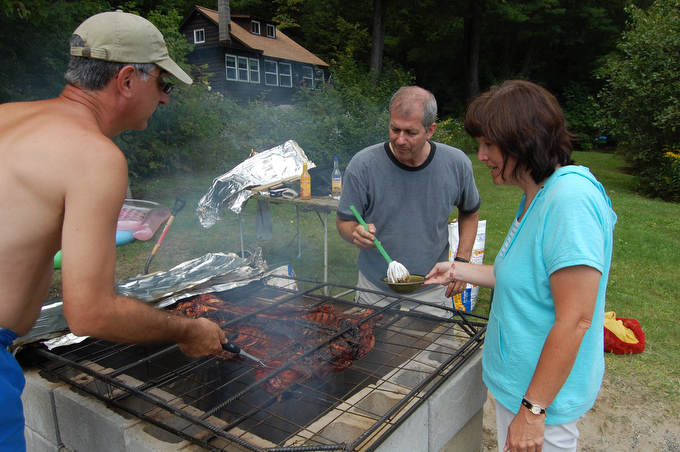 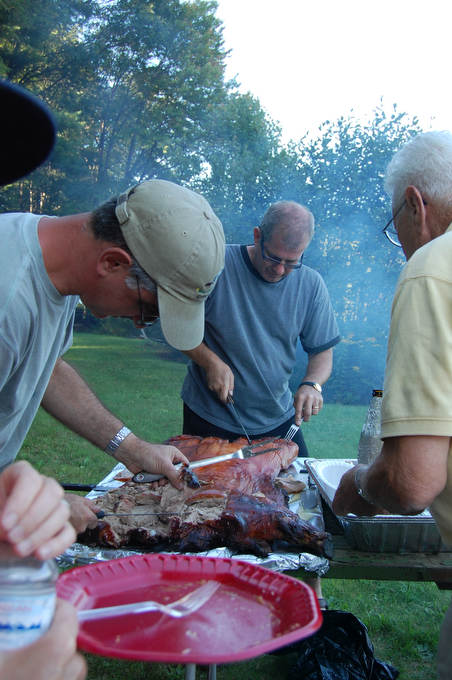 Wow. I wish that red plate in the foreground was mine. That looks fantastic! I asked Robert to elaborate on the pig roast, and he sent me this in an e-mail:

It all started at the end of the summer of 2008 when my friend Ross Overbury and I were put to a challenge of roasting a whole pig for a Labor Day weekend BBQ for 2009. Ross is from Lachine, Quebec, a suburb of Montreal and I am from Central Nyack, NY. The pig roast took place at Trout Lake, not far from Lake George, NY.

Ross said “When this started we had no more than the words “pig roast” go to by. Robert and I had been musing over how it might be interesting to roast a whole pig — you know, the way you might dream about mushing a dog team or building your own hang glider or something. We were overheard and before we knew what we were doing we were ‘volunteered’ to a roast pig dinner for a party of about 40 people.”

Ross said of his cooking background “I was raised on bland British cooking, and by the time I was in my teens I was ready — desperate! — to explore other styles. I love scouting ethnic grocery stores for ingredients I’ve never worked with before. Generally I find other customers and staff of those stores are happy to talk to me about how to prepare my discoveries.”

I like to cook BBQ, from Tandori chicken and Saigon beef sticks to pulled pork and beef brisket. Ross has influenced me to try more styles of cooking.

So we had a whole year to put this together. We started by researching the best way to make a pit to do the actual roasting. We got a simple idea from cuban-christmas.com/pigroast.html. I welded a frame from rebar and wire mesh to hold the pig and used 48 cinder blocks for the pit.

The pig was purchased from Jacobs and Tonys in Warrensburg, NY. It weighed in at about 50 pounds with the head and hoofs removed. The pig was marinated overnight with mojo sauce. We did not have a cooler to hold the pig overnight so we made one from Styrofoam boards from Home Depot. We slow cooked the pig from around 9:00 am till 1:00 pm and then turned it over and continued until around 4:30 pm.

When done, the pig was pull apart tender. Even though you see a knife in my hand, you could have just used a fork to serve it. Sorry Liz, the leftovers are all gone.