People are reading
You are at:Home»Food Links We Love»Great Moments on the Grill: Blizzard Breakfast

Jeff Chandler of Mohegan Lake sent in this silly photo: 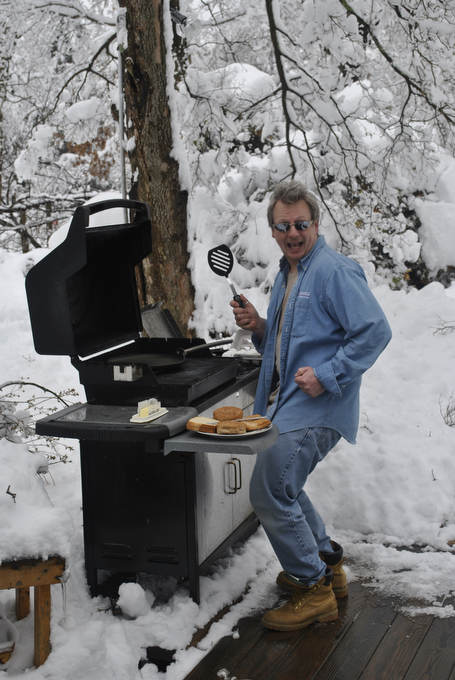 The day after the big February snowstorm (2/26) took out our power – and those of my immediate neighbors – we fired up the grill and made breakfast sandwiches for all! Unfortunately we did not get power back for another 5 days, so the grill was running around the clock… We even used it to melt snow in an effort to keep my daughters goldfish warm!!

That was very kind of you, Jeff! Later, in an e-mail, he explained further:

As we all know, Westchester got slammed with a major blizzard in February of this year. The storm took out a major part of my tree in the front yard, which in return, took out my power box… (ripping it right off the side of our house!)

While digging out the next morning, we realized that all of our surrounding neighbors were without power as well… Having no where else to turn, I dug out the grill and fired it up, making breakfast sandwiches for anyone holding a shovel – and that’s exactly what I’m doing in the submitted photo. (What you did NOT see in that picture though was the rather large blob of snow that plopped onto my head moments after the shot was taken!)

Over the next 5 days, (Yes, we actually had NO power for five days and had to move into the basement to keep warm via the fireplace) we relied on that grill for everything; breakfast, lunch, and dinner. Our meals were pot luck surprises as any food starting to defrost became that night’s meal – ham steaks, swordfish, lasagna… you name it, It was grilled! A veritable smorgasbord from the depths of our freezer!

Not only did the grill keep us fed, but it became a major lifeline for a few family members as well – in a desperate attempt to save my daughter’s tropical fish, we boiled snow to help keep their tanks warm! (I can proudly say that we only lost one fish when all was said and done.)

Amazing story, Jeff. Thanks for sharing!