People are reading
You are at:Home»Restaurants»Satisfying cravings at North Star Restaurant in Pound Ridge

Hi everyone, Diana Costello here. I wish had discovered North Star Restaurant years ago! There’s a real mellow, hippie vibe running throughout the place, with just as much class as you would expect considering its Pound Ridge location. Truly, the decor is enchanting. And as I happily found out last week, the food lives up to the atmosphere. 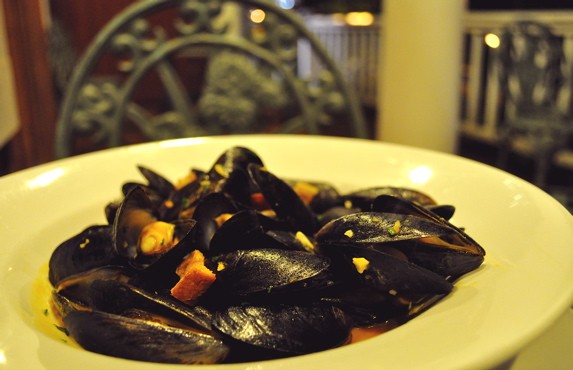 My first trip to North Star somehow did not involve food. But I wasn’t going to make that mistake again this week, when I went to listen to a friend perform as part of the restaurant’s acoustic Wednesday music series.

I opted for appetizers so others could also indulge. Fried calamari is a staple, so of course I had to give it a try. The dish was everything fried calamari should be — crispy bites of tender squid with just enough tentacles in the mix. And as a lover of condiments, I was thrilled to see two dipping sauces: basil tartar and spicy tomato. Check, North Star passed the fried calamari test.

A photo, and more, after the jump. 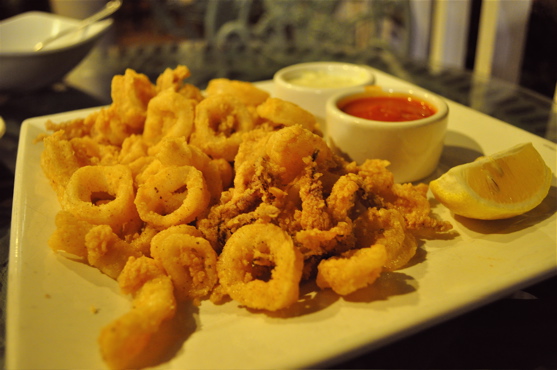 The next no-brainer we ordered were the Prince Edward Island Mussels. I’ve been craving mussels for the past two weeks, so I needed my fix. These were steamed in a savory sofrito and served with little garlic croutons in the mix. The mussels were super moist and meaty, cooked just right. And yes, the sauce was so good I was slurping it up with my empty shells! I could have used a little garlic crostini to help soak up every last drop, but I guess that’s a good complaint to have. 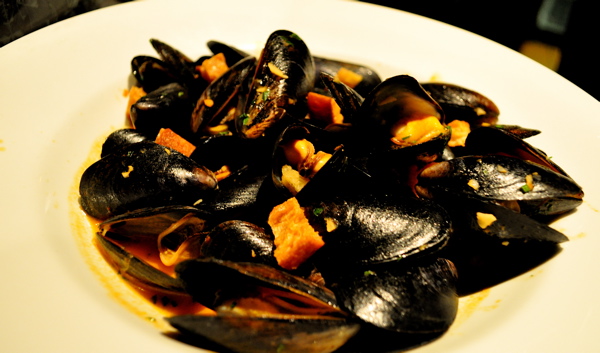 The truffle mac and cheese also was a quick pick. I mean, it’s truffle mac and cheese for crying out loud! It has to be good! And oh yeah, it was! The truffle flavor was mild, not overpowering in the least, and the pasta, cute little shells, were nice and al dente. What was on top helped set it over the top — toasted breadcrumbs. These added a gentle little crunch, but also some really delicious flavor. I’d say this was my favorite dish of the night. 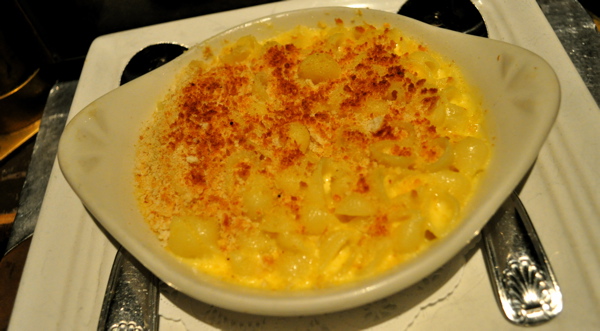 Our last dish, I must admit, was called in off the bench. You see, I really wanted the duck confit dumplings with an apple/rosemary puree (sounds yum, right?), but I guess a lot of other people wanted them too, since the dish was sold out. Time for Plan B. I turned to the bar menu. Artichoke dip it would be. 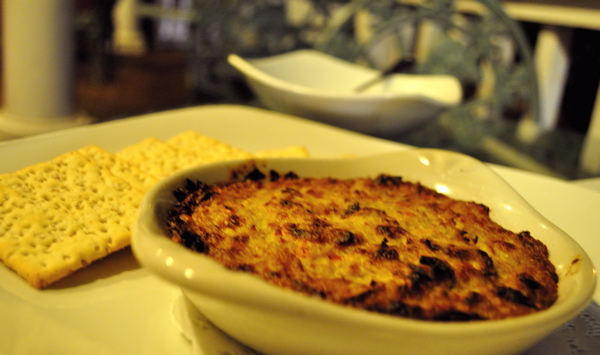 I know, it sounds boring. But there were some vegetarians around and so I figured I’d throw them a bone. Er… or vegetable. But it actually turned out to be a great call, and one that I would repeat. Know how sometimes artichoke dips are nauseatingly heavy? This somehow retained a lighter feel, though it still held on to the creamy texture you’d want and expect. And there were plump chunks of artichoke heart throughout the dip, which added a bit of bite and obviously lots of succulent artichoke goodness. It was served warm with a baked top layer and simple crackers on the side. I prefer soft pita wedges, but whatever. This was a perfect bar snack.

I certainly look forward to exploring this menu in and out. Thanks to Phil, the owner, and Clay, the bartender, for a fantastic evening. See you guys soon!

When Diana Costello was little, she got in trouble for listening to Led Zeppelin during religious instruction and hasn't stopped jamming since. She now spends way too much money on concerts and wonders how she ever survived without an iPod.