People are reading
You are at:Home»Restaurants»Discover the Fun of Falafel

Freelancer Jerry Eimbinder has a nice story in today’s paper about how falafel is getting  more popluar. Here’s a look:

Falafel is an easy target.

The word can make you chuckle (it rhymes with waffle!). It’s popular with the counterculture (such as hippies at Grateful Dead shows). And half the people we’ve asked aren’t even sure exactly what it is (doesn’t it come in a pita, like a gyro?).

But once you realize what is in a falafel — it’s a fritter, essentially, made from chickpeas or fava beans, or both — and how healthy and delicious it can be, we’re betting you’ll get a little more serious about falafel. Especially when you realize how popular it’s getting. 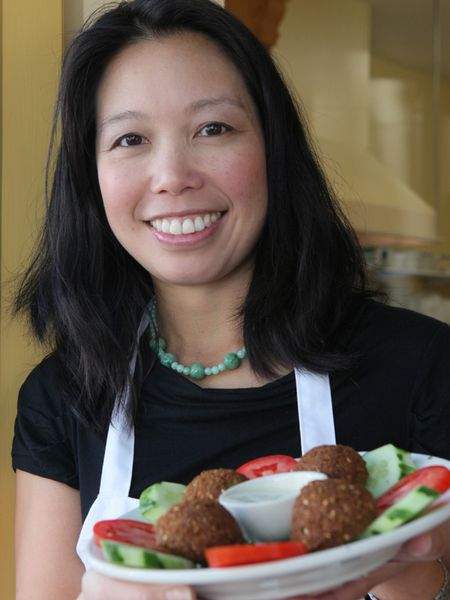 Kerri Jew, owner of Taiim Falafel Shack in Hastings-on-Hudson, with a plate of falafel. (Xavier Mascarenas/TJN)

More, after the jump.

When former New York Mets star and Yankees player Darryl Strawberry opened Strawberry’s Sports Grill in Queens this summer, a falafel burger was on the menu along with traditional pub food. Two just-opened local cafes, Open Table Grill in Eastchester and Good Life Gourmet in Scarsdale, have falafel on their menus, and a third — Taiim Falafel Shack in Hastings-on-Hudson — can claim falafel as its middle name. The demand, says Taiim co-owner Zamir Iosepovici, has been astounding.

“I had no idea we would be cooking more than 300 falafel balls a day,” he says.

Michael Skibitcky, a chef-instructor who teaches a Mediterranean class at the Culinary Institute of America in Hyde Park, is already pretty serious about falafel, too. In his course, and in a coming cookbook, he shares a recipe he discovered in a small cafe near the entrance to the Wailing Wall in Jerusalem. He had heard it served a “marvelous” falafel.

“I went to see for myself and had some of the best falafel I ever tasted, made fresh using a small grinder while I waited,” he says. “With a little persuasion, the chef who spoke only Arabic gave me his recipe.”

Skibitcky says he thinks travelers discovering falafel abroad — and then wanting more at home — are creating a demand. Plus, he says, awareness of its nutritional benefits is growing. Finally — and this is very serious, indeed — falafel just tastes good.

A well-made falafel should be crispy on the outside and tender on the inside. Deep-fried or baked, it is usually eaten with tahini sauce and served in a pita bread. Typical accompaniments are chopped peppers, onions, cucumbers, tomatoes and even French fries. Except for the fries, it’s all healthy stuff.

Three falafels by themselves represent only about 140 calories,” Skibitcky says. “So even with a small salad and a whole-grain pita bread, a falafel meal has a calorie count of only 250 or 300. If the falafels are baked with olive oil they have less than half a gram of fat — if deep-fried only about two grams. Falafels are tasty if baked so they don’t have to be deep fried.”

Where falafel came from is a matter of deep dispute. Some historians have traced it back to the early Egyptians but others say it may have originated in India or Pakistan. It is often referred to as the national food of Israel, where it can be bought at street stands, and many Israelis eat it every day.

The recipes used for falafel in Israel and Jordan are similar, Skibitcky says. “In both countries, chickpea is the principal ingredient, though in some other Middle Eastern countries, a 50-percent chickpea/50-percent fava bean combination is common. In Egypt, falafel is made only from fava bean.”

Around here, you’ll find all sorts of varieties. At Taiim, the falafel are 100 percent chickpea. (The restaurant is co-owned by Iosepovici and his wife, Kerri Jew. Iosepovici is of Israeli decent and the chef, Abu Ghaleb,, is Jordanian.) At Lefteris Gyro in Tarrytown and Mount Kisco, chef-owner Chris Grammatas uses half chickpeas and half fava beans. And yes, falafel are flying out the door there, too.

“We have seen a mega interest increase in falafels during the last year or two,” he says.

Eric Korn, chef-owner of Good Life Gourmet, says it was only a matter of time before falafel caught on. “I learned how to make falafel from a Kurdish woman a few years ago when I worked in Ohio and I knew once I had my own restaurant I would offer it.”

And, we’re betting, now you’ll order it. And you won’t chuckle a bit.

Chef Michael Skibitcky brought this recipe back from a cafe in Jerusalem, where the falafel are ground moments before they’re cooked. He warns to avoid recipes that call for bread crumbs or eggs and says to never use canned chickpeas.

1 to 3 Thai bird chile peppers, depending on hot you like it

Grind the soaked chickpeas together with all ingredients using a food processor. Form into balls or patties as small as you possibly can — no more than 1/2 inch thick.

To fry: Heat 2 inches of canola or sunflower oil to 350 degrees in a deep, heavy frying pan. Using a slotted spoon or metal spatula, slowly and carefully lower falafel balls into the oil. When the bottom side is brown, about 2 minutes, turn the falafel and cook the other side, about 1 to 2 minutes. Drain on paper towels.

To bake: Preheat oven to 375 degrees. Cover a sheet pan with a silpat, silicone paper or parchment paper and spray or brush with olive oil. Place falafel on the paper, then bake for about 5 minutes.

Serve falafel with garnishes, such as lettuce, tomato, cucumber or sprouts, and spoon tahini sauce on top.

Where you can order falafel

Elia Taverna: Falafel can be ordered as an appetizer or as a three-piece, pita-bread sandwich with onions, lettuce, tomato and a choice of sauces including tahini and sesame. The cost for either the five-piece dish or a sandwich is the same: $7.95. A platter, including a Greek salad and a choice of side orders, is priced at $12.95. 502 New Rochelle Road, Bronxville. 914-663-4976.

Epstein’s Kosher Delicatessen: Serves falafel balls as an appetizer, a falafel sandwich and a $10.95 platter with an Israeli salad and pita bread. 2574 Central Park Avenue, Yonkers. 914-793-3131.

Open Table Grill Bar: For $5.95, five falafel balls can be ordered with Israeli salad in pita. A hummus-falafel combination has five falafel balls on top of a plate of hummus ($7.95). Not to be outdone, the Middle Eastern Platter has ten falafel balls, hummus, tahini, baba ganoush, Moroccan eggplant salad, two pieces of pita and Israeli salad; it can feed two people ($10.95). 33 Mill Road, Eastchester. 914-361-1822.

Taiim Falafel Shack: A $5 falafel sandwich comes with either white or whole-wheat pita: the $12 platter includes hummus, Israeli salad and yellow rice or cracked bulgur wheat. A side order of falafel costs $4 and a “stuffed” falafel stuffed with onions, garlic and spices sells for $6. The Israeli salad has cucumbers, tomatoes and green onions, chopped and tossed with olives in a lemon vinaigrette. 598 Warburton Ave., Hastings-on-Hudson. 914-478-0006.

Turkish Cuisine Westchester: A five-portion plate with tahini sauce (appetizer-size dish) costs $6. Falafel also comes stuffed in pita bread or in a wrap with hummus, tomato and tahini sauce at $7.53. The restaurant is currently under renovation and when this is completed in about two months, a new menu will include a falafel plate with rice and salad priced at $11.95. 116 Mamaroneck Ave., White Plains. 914-683-6111.

Turquoise: The menu includes falafel with vegetable patties and celery ($6.95) and a hot-meze combination platter of falafel, Sigara Borek (a phyllo dough with feta and parsley), and a spinach and zucchini pancake accompanied by hot sauce (house-made harissa), hummus and tahini sauce for $24.95. 1895 Palmer Ave., Larchmont. 914-834-9888.

Ya Hala Restaurant, Yonkers: Falafel is served as a $3 sandwich with tahini sauce and it comes in an $8 platter that also contains hummus, baba ganoush and tabbouleh salad. 326 S. Broadway, Yonkers. 914-476-4200.