Good morning and happy Monday. Sorry I’m a little late this morning; I’m moving kind of slow. I’ve got a pretty bad cold, and decided to work from home today so as not to infect my colleagues.

I started getting sick on Friday, but had tickets to see A Life in the Theater on Friday and couldn’t give those up, so I went ahead and tried not to breath on people. I met my friend for dinner at Chez Napoleon on 50th near 9th. Ever been there? It’s stuck in a time warp! 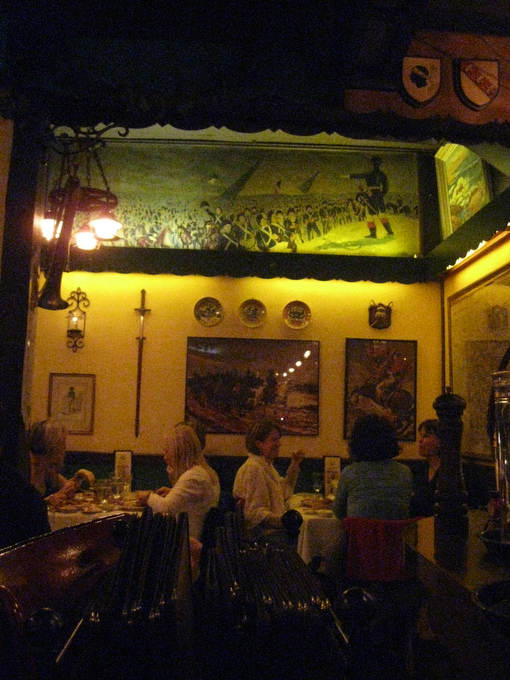 My friend had the cassoulet, which she didn’t love, but I like all the dishes I tried: duck rillettes, celeri remoulade — 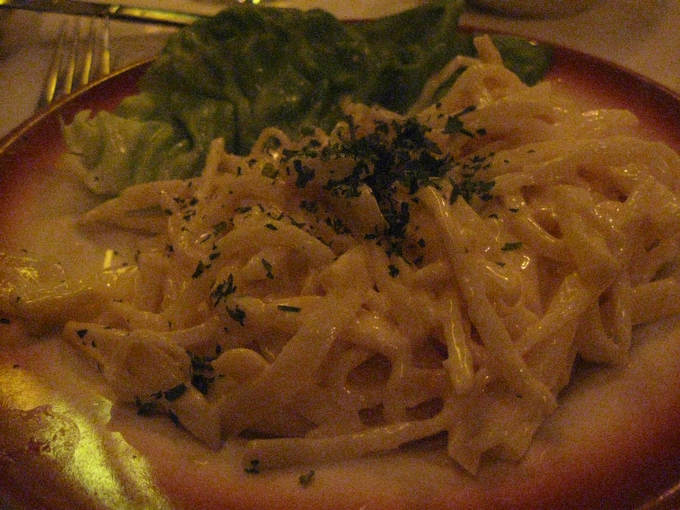 — and the soupe a la oignon gratinee: 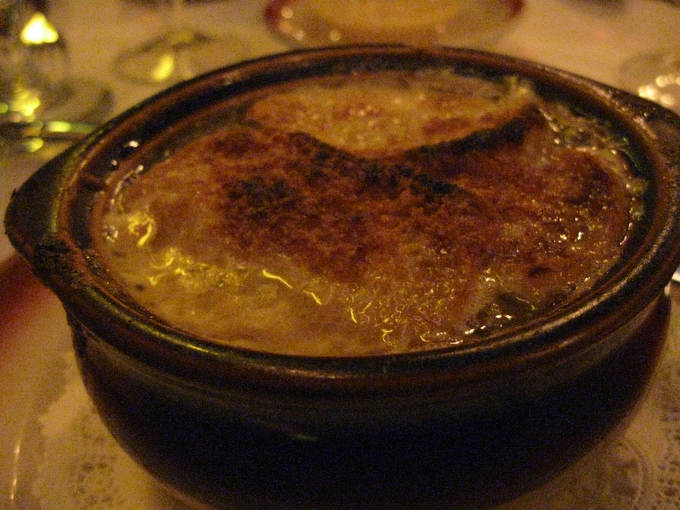 Saturday morning I had a couple of errands to run in Westchester, and afterwards, we decided to go for the dim sum lunch at Aberdeen in White  Plains: 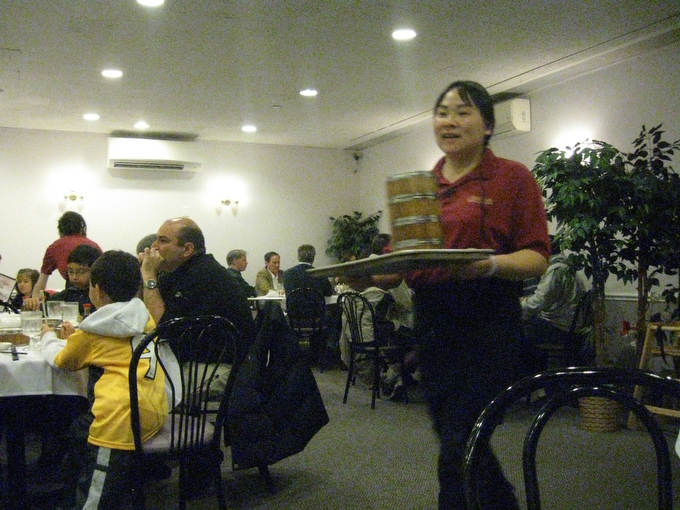 I believe Aberdeen may be the only spot in Westchester where you can get Shanghai soup dumplings, otherwise known as xiao long bao. (At Aberdeen, you have to ask for “juicy buns.”)

I admire that they offer them, but unfortunately, the skins on the dumplings were so thick it was like eating Play-Doh. There was no delicacay to what can be an etheral dish. I’ll post more photos from the brunch later.

After that, I knew I was getting sick for real. So we headed home. On Thursday, I had used the last of my frozen chicken stock to make a big pot of posole for my book club. So, knowing I wouldn’t be going anywhere for the rest of the weekend, I put my big stockpot on to make some more. I will post all the step-by-steps later, but here’s a look at the first one: 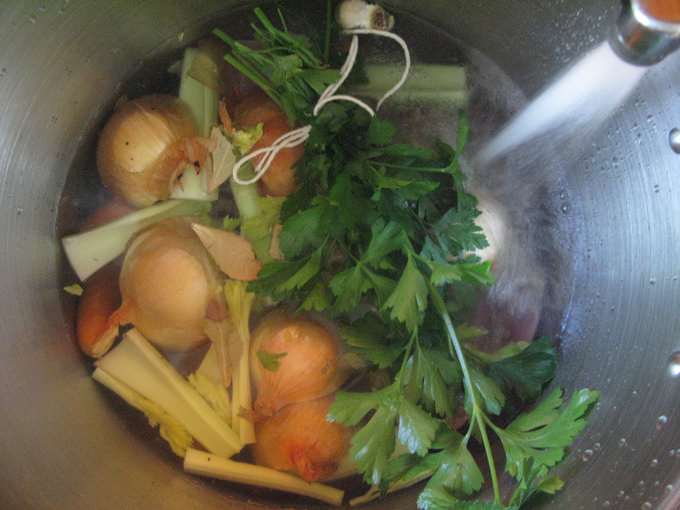 They say brandy helps a cold, and who am I to argue? So for cocktail hour, my husband made a round of Perfect Parallels, an apple brandy-based drink that’s sort of like a Manhattan. (Recipe later!) I had the wee half one in the photo: 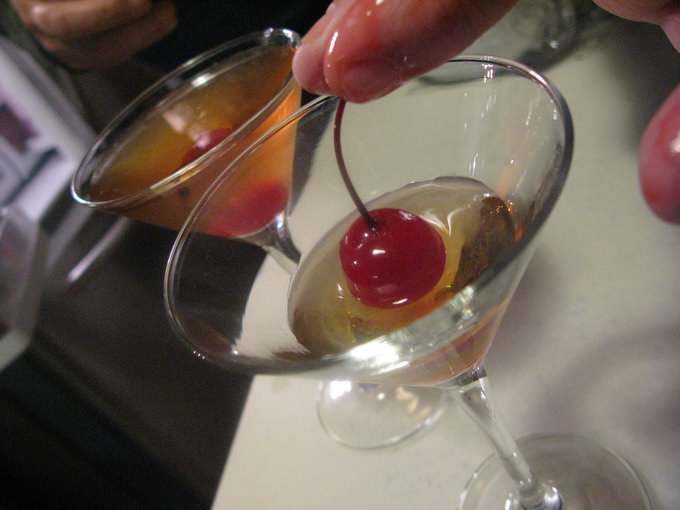 (PS, we just picked up these little 3-ounce martini glasses at a garage sale, and they are the bomb. Who needs more than that — in one sitting at least? If you want more than one, it’s not a big deal, and they stay cold while you’re drinking them. Highly recommended.)

For supper, we had some leftover posole. 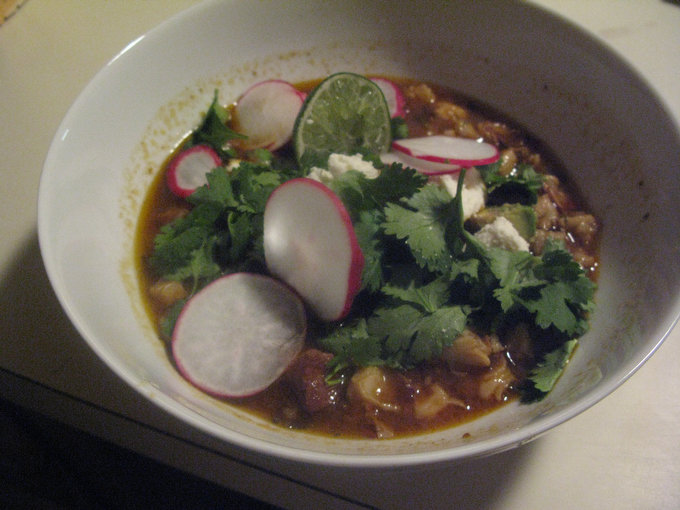 I tweaked the posole recipe from Homesick Texan. (Love that blog.) I seared off the cubes of pork in olive oil and then cooked the onion and garlic in the leftover oil, scraping up the brown bits. I only used 1/4 of the amount of chili puree she recommended, and I didn’t use ancho chili powder, I used a mix of guajillo and regular McCormicks, because that’s what I had. Hey… they say if you change three things, the recipe is yours, so… maybe this is now a Small Bites posole!

On Sunday, I took it easy and just finished off the stock. Then we made the easiest supper ever. We threw a couple of baked potatoes in the oven and sauteed some chicken breasts. While the breasts were resting, I threw some balsamic vingear into the cast iron pan and let it reduce with the brown bits a little, then poured it over the chicken. Add a salad, and presto: dinner. 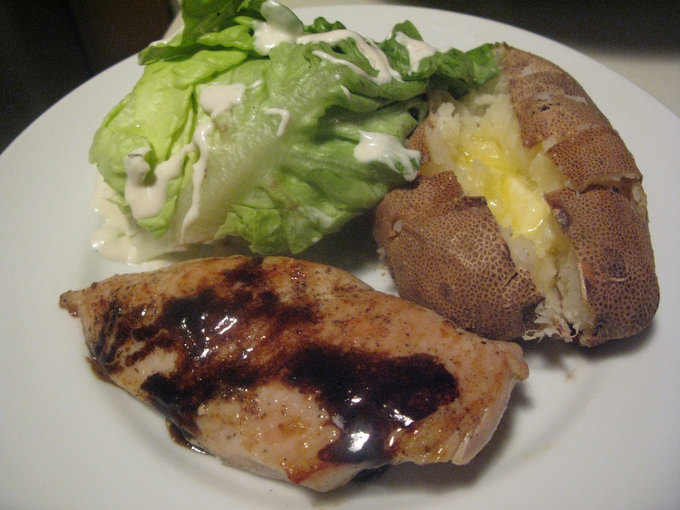 A little Mad Men and that was my weekend.

Hope yours was filled with delicious food, too. And with that, here’s what people have been talking about this weekend.