People are reading
You are at:Home»Restaurants»Now Serving: Ladle of Love in Central Park

New Yorkers found out this weekend what we in the suburbs have known for quite a while now: Cafe of Love serves outrageous truffled chickpeas.

They’re the star of the menu at the new Ladle of Love, one of just four food trucks that started serving food this week at the newly opened Central 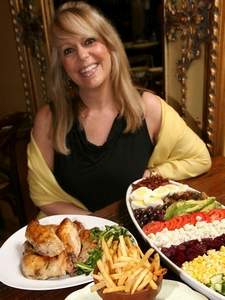 Park Visitor Center at Tavern on the Green in Manhattan. Ladle of Love is also a small storefront in Mount Kisco, known for its tasty soups, creative sandwiches and salads, and homey takeout suppers, all of which can also be delivered through an ordering service called Love on the Run.

Leslie Lampert, who owns the whole Love franchise, says she was “mobbed” over the weekend, and “the place is all atwitter” about her truffle chickpeas. “The response has been amazing,” she says.

The Ladle of Love truck joins Pera Mediterranean Brasserie, Rickshaw Dumpling Truck and Van Leeuwen Artisan Ice Cream, and all serve on the site’s outdoor terrace. The new visitor center, food court and retail shop opened Friday. It replaced the former Tavern on the Green, a landmark restaurant with twinkling lights strung around the building and its grounds. The trucks are where the Crystal Room used to be, overlooking Sheep’s Meadow.

Also on the menu at Ladle of Love’s Central Park truck are soups (such as mushroom barley), sandwiches (such as a grown-up grilled ham and cheese — serrano and manchego on ciabatta with smoked paprika aioli and watercress) and desserts (such as stuffed brownies).

Ladle of Love is the only truck that’s not originally from New York City, and it’s the only hybrid, electric mobile food truck. 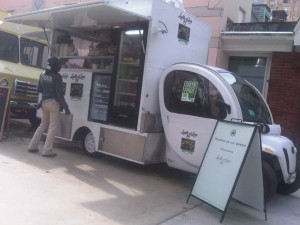 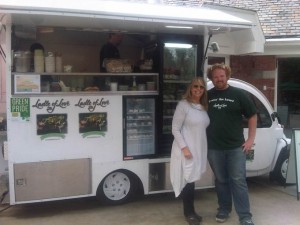 It’s a custom-designed GEM — General Electric Motorcar that plugs in to recharge at night. And, Lampert says, that’s not the only way she’s green: all of her takeout containers, utensils and cups are 100 percent compostable. “We’re trying to save the planet, one cup of soup at a time,” she laughs.

And the chickpeas? They’re such a hit that residents of the Upper West and Upper East sides are already asking whether Lampert will deliver to their homes. (Yes, soon.)

In other words, outrageous. But we knew that already.