People are reading
You are at:Home»review»Chili Dogs in Newburgh

Hi, Katherine Curry here, resuming my quest, begun this summer, for the best chili dogs in the lower Hudson Valley. 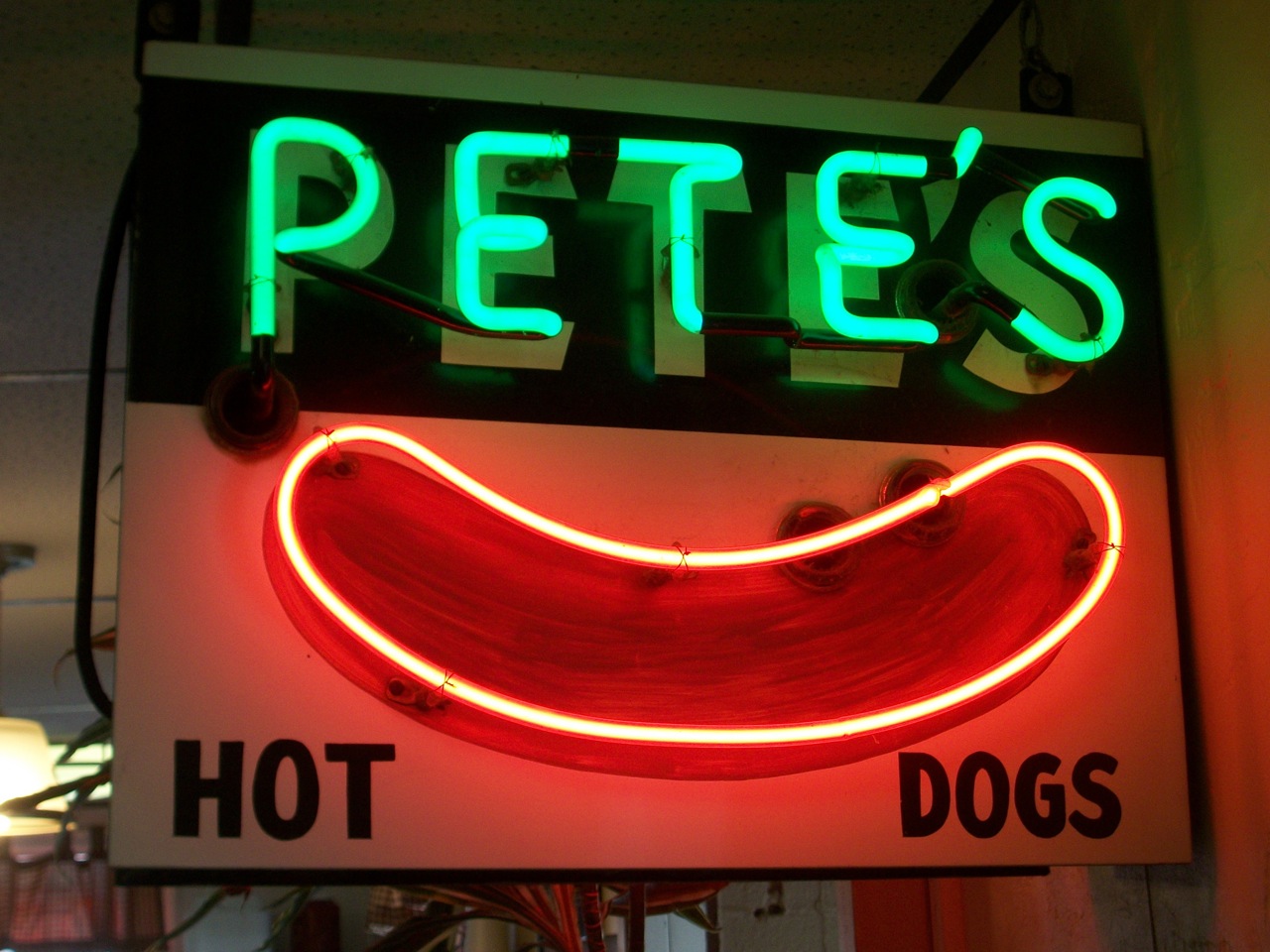 Lots more pictures after the jump.

This time I ventured north, to Newburgh, home of two “Texas hot” style spots, Pete’s and Tony’s Newburgh Lunch.  A third, Texas Lunch, has since moved to Walkill (there are more Texas-style joints in Kingston, I hear).

With me was Roadfood maven Michael Stern, an expert on all things hot dog-related.  Michael’s GPS took us on a thrill-inducing tour of Newburgh’s most downtrodden streets — some very dicey areas, so if you go, go in the daytime and know where you’re headed.

First stop, Pete’s, a simple hot dog spot with counter service, on a  side street not far from Downing Park, a lovely 35-acre park (in a sadly run-down,  unlovely town) that was the last project designed by landscape architects Olmstead and Vaux, the designers of Central Park. 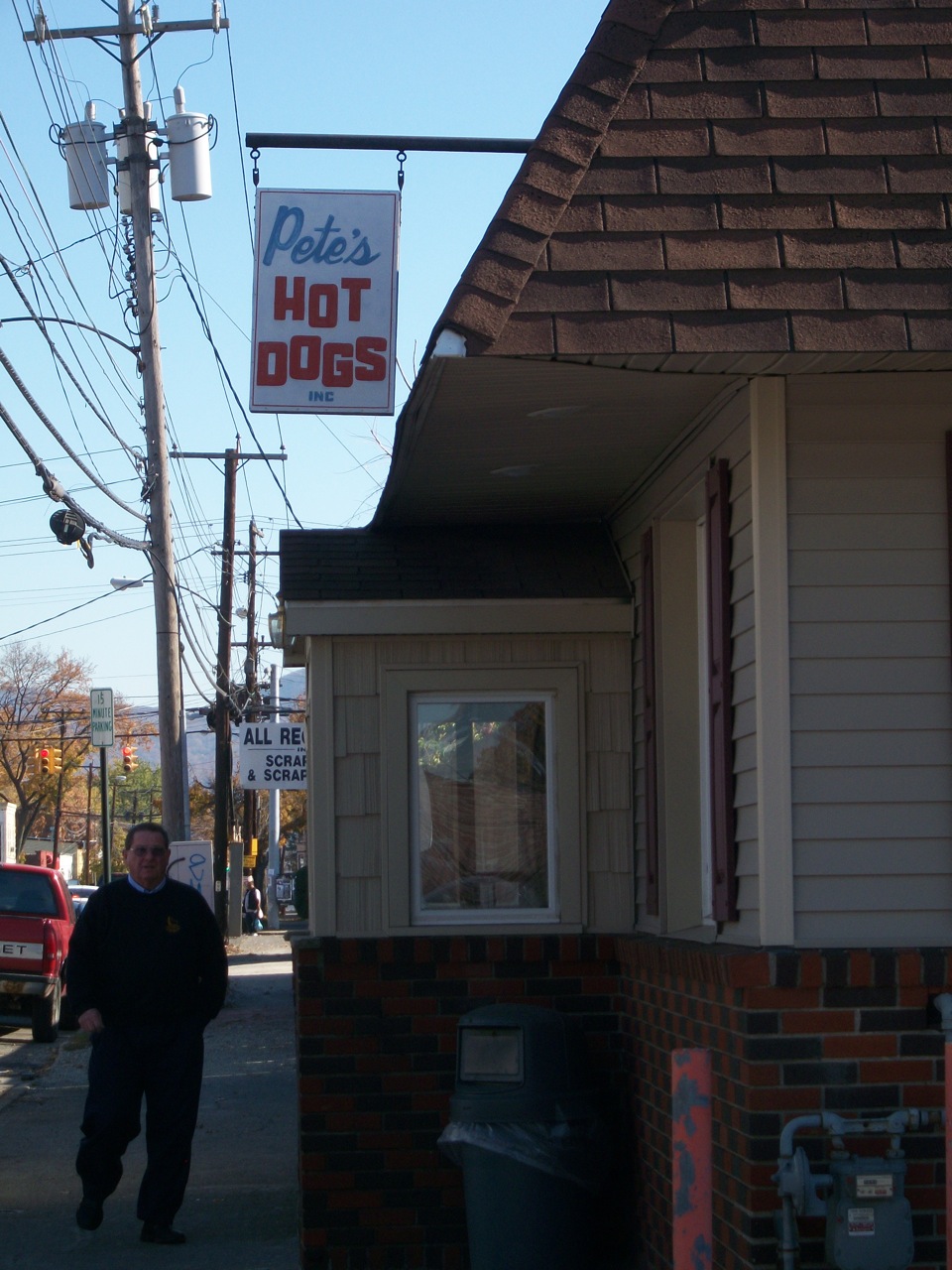 Pete’s has been around since 1932.  Apparently Pete’s used to use local Temple Hill hot dogs, but Temple Hill is no more, so Pete’s dogs are now natural-casing Boar’s Head. Never having tasted a Temple Hill dog, I don’t know what we were missing, but the dogs we ate were pretty terrific: large and meaty with a great snap to them. 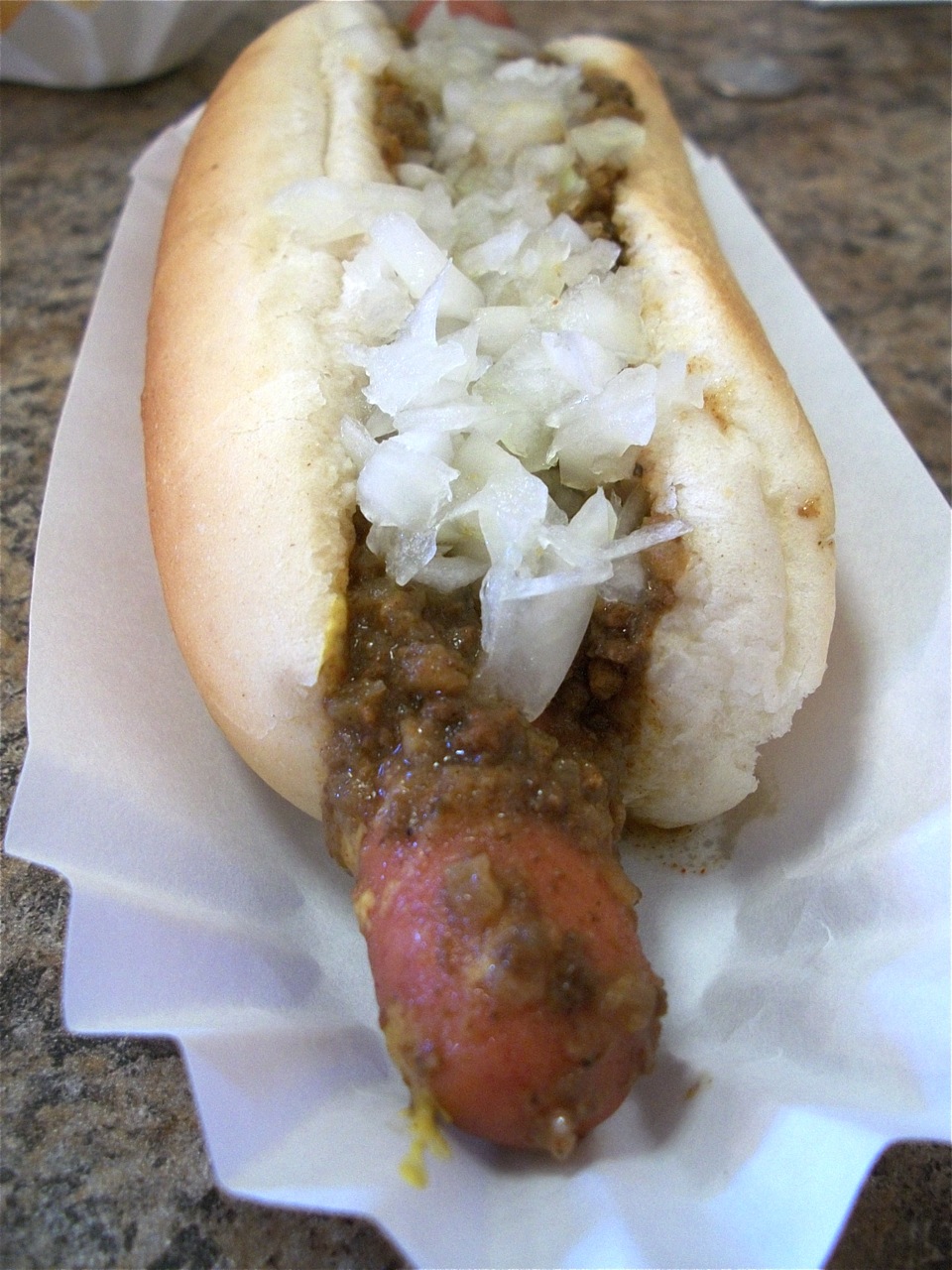 Above is a picture of the Texas hot weiner, topped with the beanless meat sauce that defines a Texas hot, along with chopped onions and mustard. The chili was milder than I like, but overall, Pete’s makes a very good chili dog. 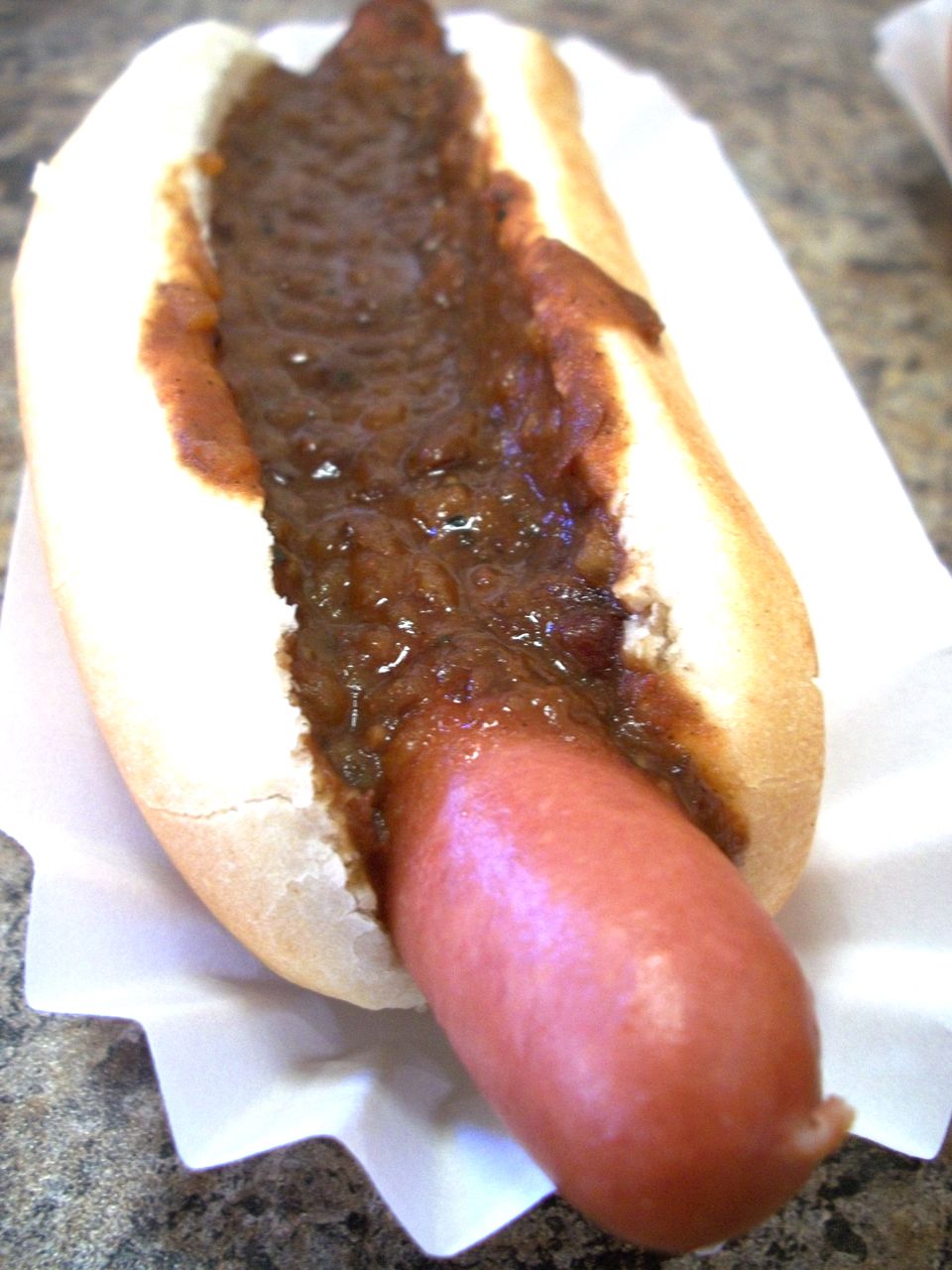 Our second dog was topped with the regular chili, which is laced with small bits of bean that give the chili a rugged texture.  Pete’s provides a lot of lunch for a very small amount of money — our dogs were $1.57 each.  (And a double dog is $2.98, and the nearly-unimaginable triple is $3.86!)  There’s not much more to eat at Pete’s than hot dogs — you can order sodas and a bag of chips, and that’s about it.

At high noon, Tony’s was packed with an assortment of older couples, day laborers, workmen, and daytrippers in cashmere sweaters.  Tony’s is a popular place with just about everybody, it seems.

In addition to Texas hots, Tony’s serves fries, onion rings, burgers, grilled cheese and, starting at 6:30 a.m., breakfast.  Most items on the menu come in under $2 — the priciest item is the hearty (and heart-attack-inducing) dog and cheese omelette for $3.80. Tony’s sauce is available for sale in 16 and 25 oz. jars, too. 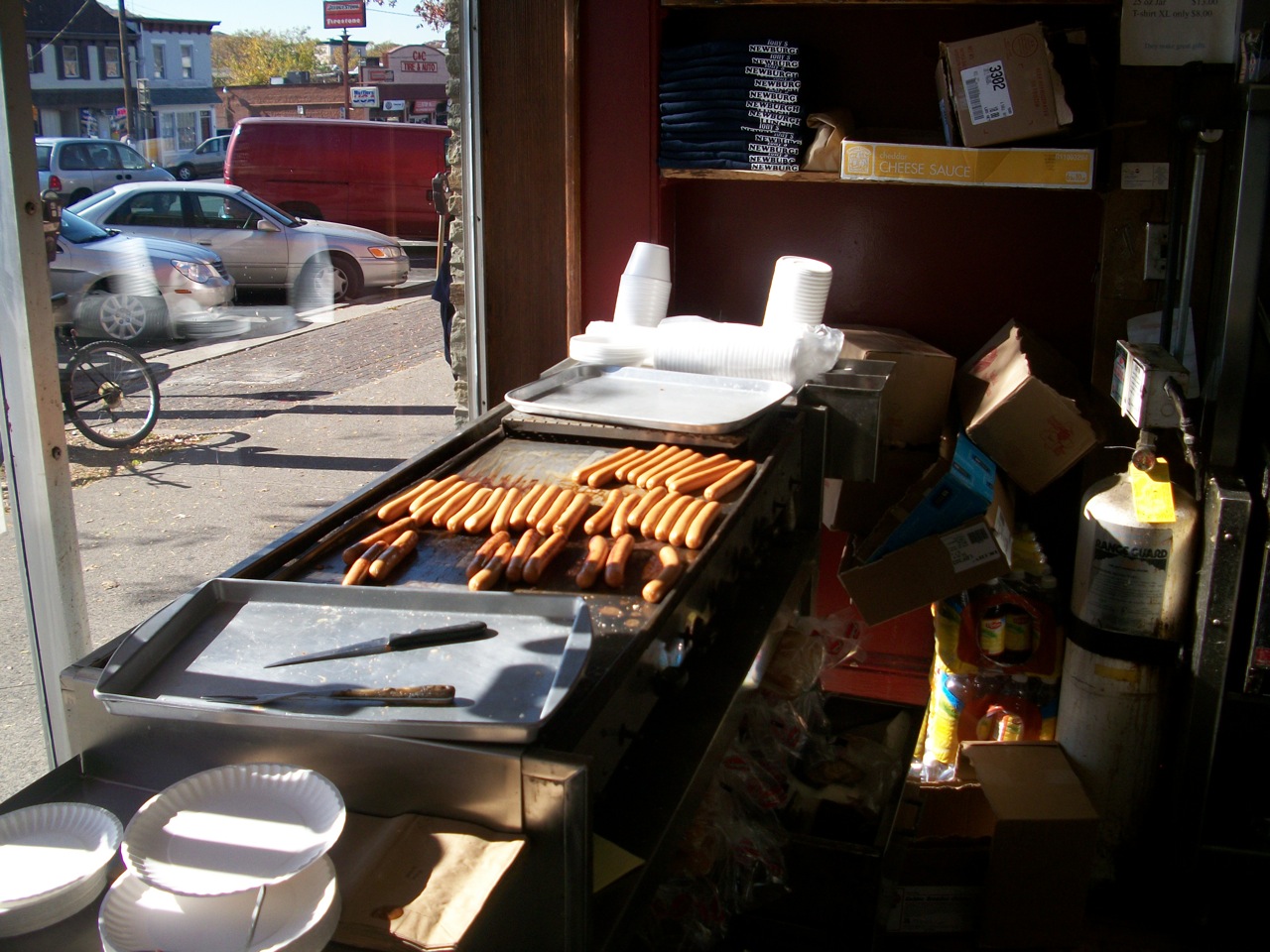 The dogs are cooked in Tony’s front window. The sauce that’s spooned atop them has a mild heat that compliments almost anything on the menu,  but the wan little weiner we ordered in traditional Texas hot fashion, with mustard, sauce and onions, lacked snap and flavor. 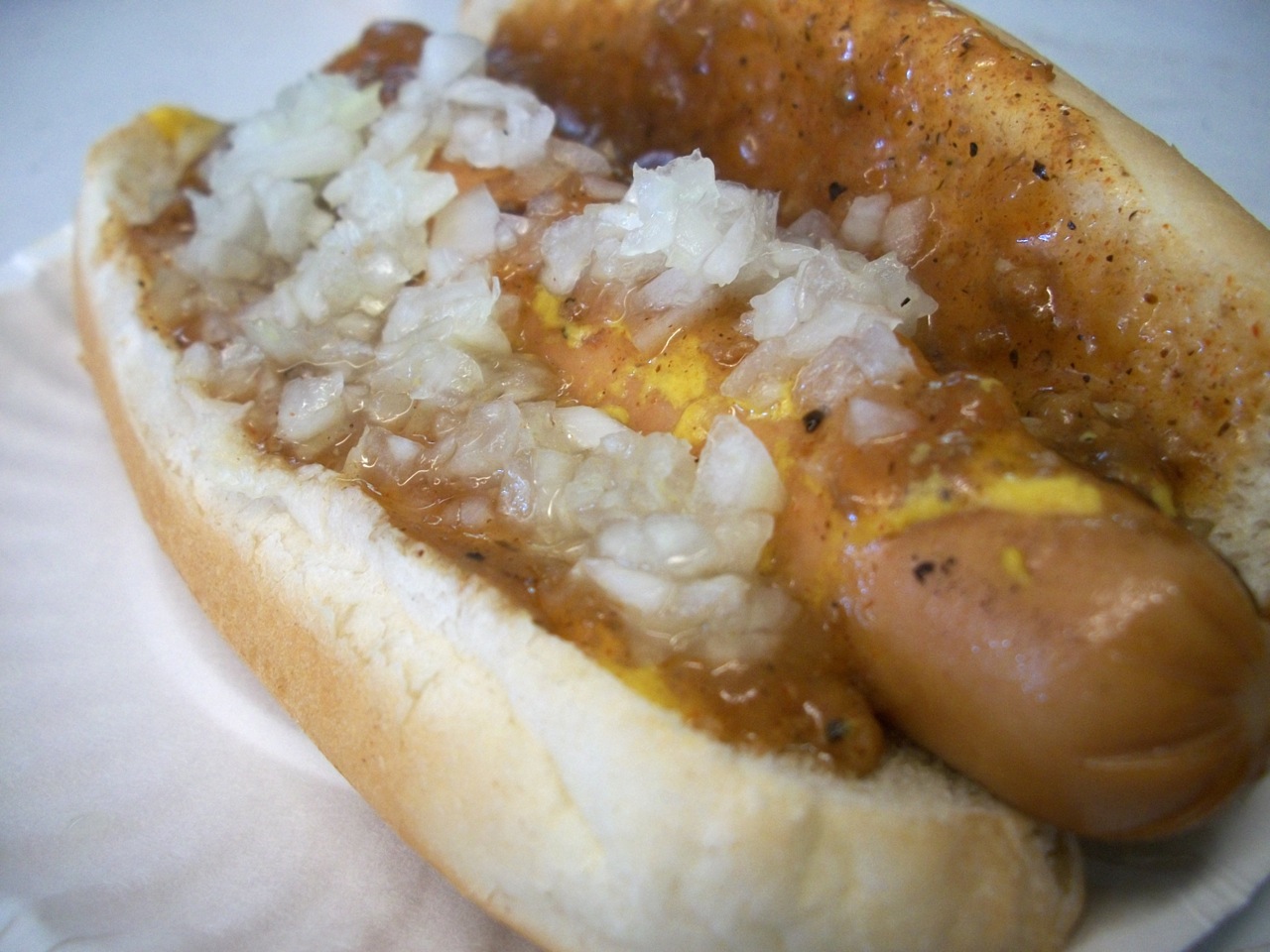 Far tastier was the mysterious-sounding Tom Tom Melt, described as a grilled cheese sandwich with hamburger, Texas sauce, bacon and onions.  I hail from Pittsburgh, home of Primanti Brothers, where everything — meat, cole slaw, and french fries — is slapped between slabs of bread and called a sandwich.  So I felt right at home with a mash-up like the Tom Tom Melt. 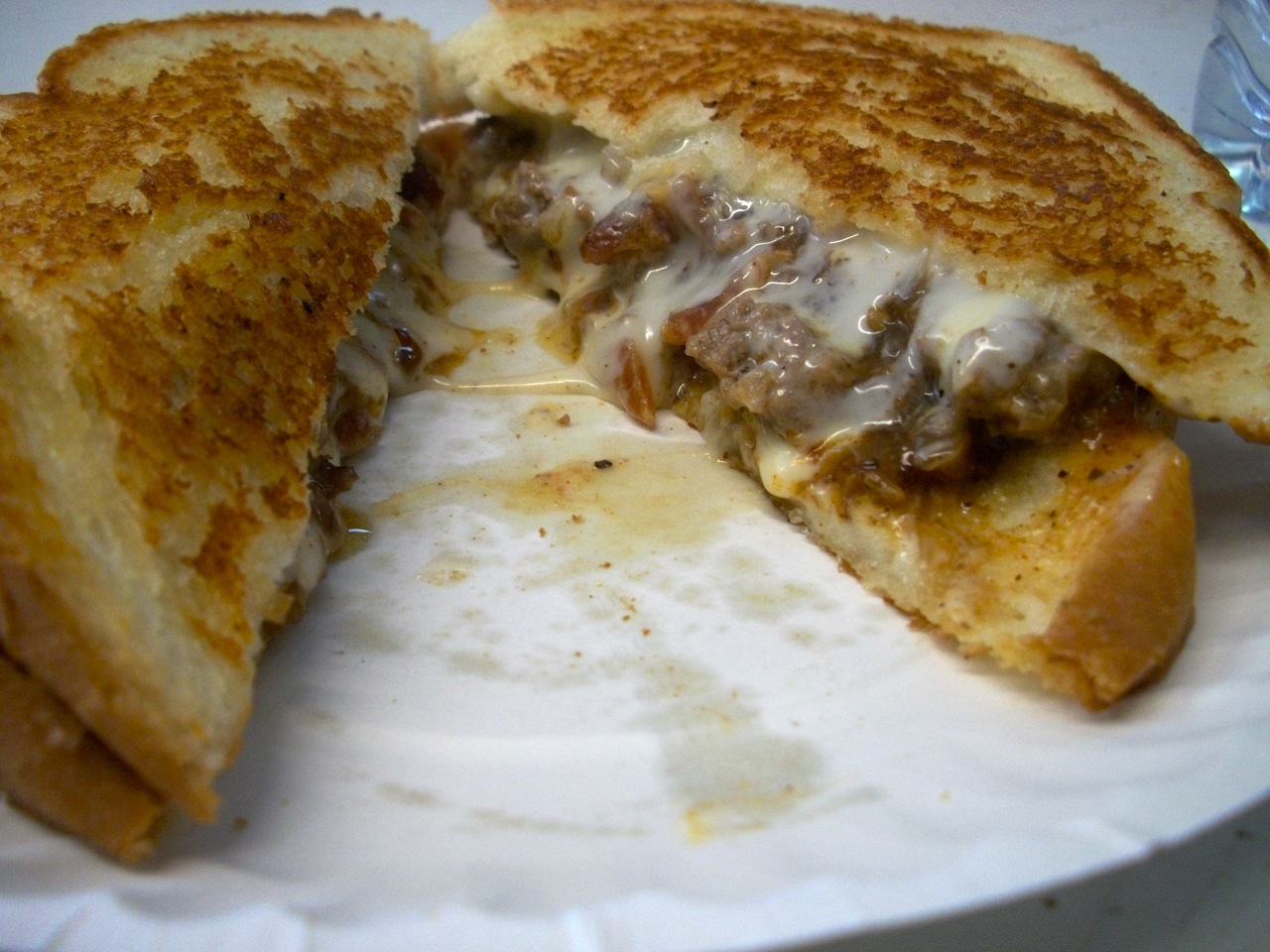 The hamburger didn’t come as a patty — it was chopped up and mixed in with the cheese, which made for a gloppy, meaty, cheesy mess sandwiched between slices of buttery, crispy white bread.  This is the kind of sandwich that I would have waxed rhapsodic about in my youth, provided it was 1 a.m. and I was schnookered.  Yum.