People are reading
You are at:Home»Chefs»Chefs to Watch: Eric Gabrynowicz of Restaurant North in Armonk 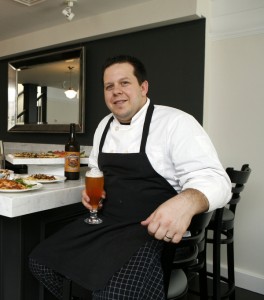 Cooking style or philosophy: Simple and ingredient-driven. “It’s all about letting the ingredients shine. The farmers have been doing so well by us for so many years, it’s about time we let them shine through what we do. I take the farm-to-table approach and pair that up with something my old football coach used to say, ‘keep it simple, Stupid.’ ”

Favorite ingredient: “Pork of all varities. Because I don’t think I’ve met anyone in my life who doesn’t like pork. If a vegetarian is going to cross over he’ll do it for bacon, not a chicken cutlet.”

Why he’s one to watch: Gabrynowicz is not only a talented cook who uses local ingredients to make gutsy, bold-flavored food — he’s also an organizer. He buys direct from farmers, and credits their ingredients on his menu. He is a force behind Hudson Valley Restaurant Week. His leadership, and his cooking, is refining the Hudson Valley’s culinary identity. Case in point: Over the summer, Gabrynowicz drove from his home in Beacon to Sycamore Farms in Middletown, N.Y., to pick up the first of the local corn. He cut it off the cob to make a succotash of sorts, using just-warmed blueberries (of all things!), which he served over a silky polenta from Wild Hive Farm in Colombia County, topped with a simply seared Long Island duck breast from Crescent Farms.

Future influence: Helping to build a local restaurant community. If there’s one thing Gabrynowicz misses about working in Manhattan, it’s the restaurant community. “Chefs who have had that experience in the city miss the sense of camaeraderie,” he says. In the city, it was easy to build an industry community because “we were all so close. In Westchester, it’s harder but there are so many (industry professionals) that are trying.”