People are reading
You are at:Home»Chefs»Chefs to Watch: Matt Hutchins of Birdsall House in Peekskill 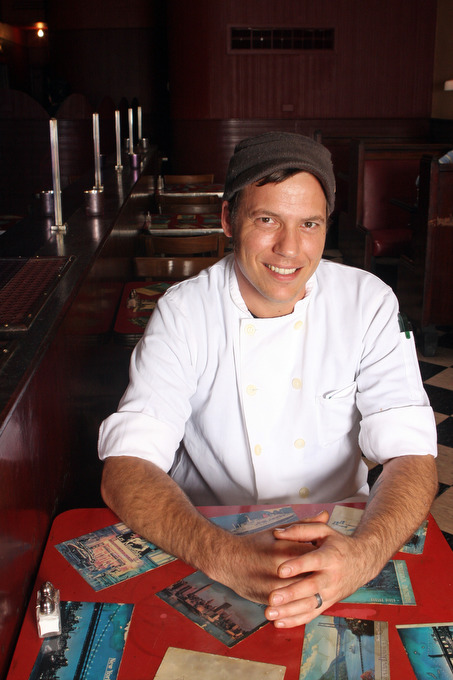 Cooking style: “I’m from northern Florida, so there’s a Deep South influence. I also grew up not too far from New Orleans, so there’s a Cajun influence. And there’s Cuban and Mexican in my family, so Caribbean flavors are all around. We get all our meat products from a farm that’s 10 minutes away: Hemlock Hill (in Cortlandt Manor). [Another] part of what I believe in [is]using every part of the animal. With a pig, I make my own sausages; I use the liver, heart, kidneys and tongue to make pork pate.”

Signature dish: “Our beet burger: a combination of gold and red beets, flaxseeds, wheatberries, spelt berries and bulgar wheat, mixed with bread crumbs and spices, and topped with wilted spinach, carmelized onions and apples, and goat cheese. I made this our opening week with vegetable scraps made from beet salads. Now it outsells our regular hamburger. I can’t take it off the menu.”

Why he’s one to watch: Hutchins’ cooking — with culinary influences from all over the South, and ingredients from the Hudson Valley — could easily be a hodge-podge of styles and flavors. But it works. As a transplant to our region, he brings an outsider’s perspective. But his creative use of local ingredients emphasizes all that’s special in our own backyard.

Future influence: “I take pride in knowing I’m not taking shortcuts in a lot of ways. We even make our own mayonnaise, mustard and ketchup here. So many restaurants have dumbed down food, yet they still charge $25 a plate for something that’s frozen from a corporate chain. I want to be part of the scene trying to overturn that.”