People are reading
You are at:Home»Restaurants»Local Links

Good morning and happy ice storm Wednesday. It’s Groundhog Day, right? And we do feel like we’ve seen this weather before?

Forgive me — again — for not being able to get to the blog until Wednesday this week. I’ve got a lot of my plate (no pun intended) these days.

I had some good cocktails this weekend. Aviations (here’s the Aviation recipe) — 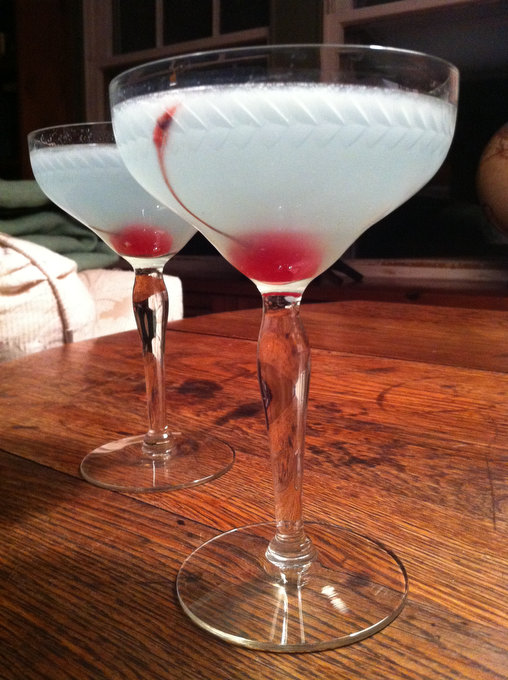 and what I’m calling Recession Sidecars: 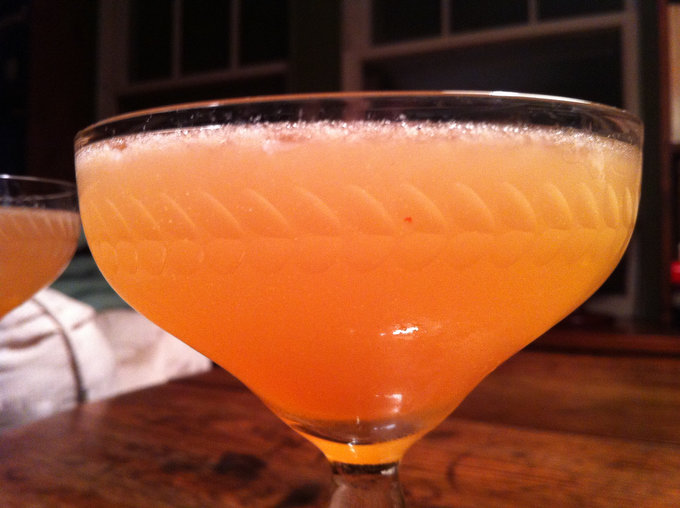 I had a big bottle of cheap brandy I’d used for a punch, and I made the cocktails using that instead of more expensive (but frankly, much better) Cognac. You can use the ratio here in my recipe for Carjacks — a sidecar made with Lairds applejack instead of cognac. (Or brandy!) More on Lairds in a moment!

On Friday night (after the Aviations), we had breakfast for dinner. Eggs, waffles and bacon. No photos, sorry!

On Saturday, we made a terrific recipe from “An Apple Harvest: Recipes and Orchard Lore” by Frank Browning and Sharon Silva (10 Speed Press). It’s called Roman Pork and Apple Stew, and it is one of the most unusual tasting pork dishes you’ll ever find — I swear. 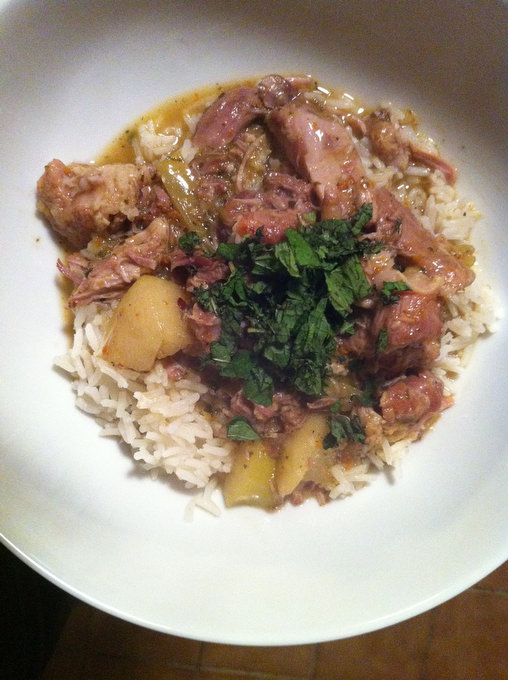 You sear the pork and then cook it in chicken stock that’s flavor with — of all things! — fish sauce and anchovy paste! It is an ancient dish. In Roman times, they used to keep a flavoring called garum, a condiment made from fermented fish guts. Sounds gross. But it really is divine, with tons of umami, just like the fish sauce we use in Southeast Asian cooking today.

Sunday morning, I had the best cappuccino in the world at Art Cafe in Nyack: 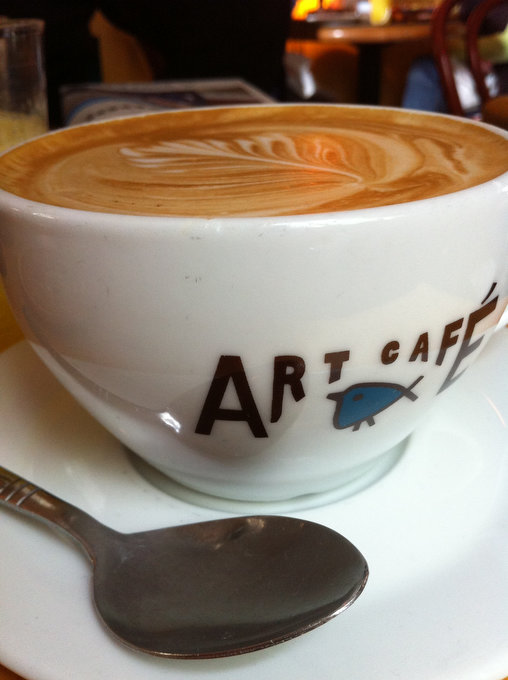 And my husband got their terrific oatmeal with fresh fruit: 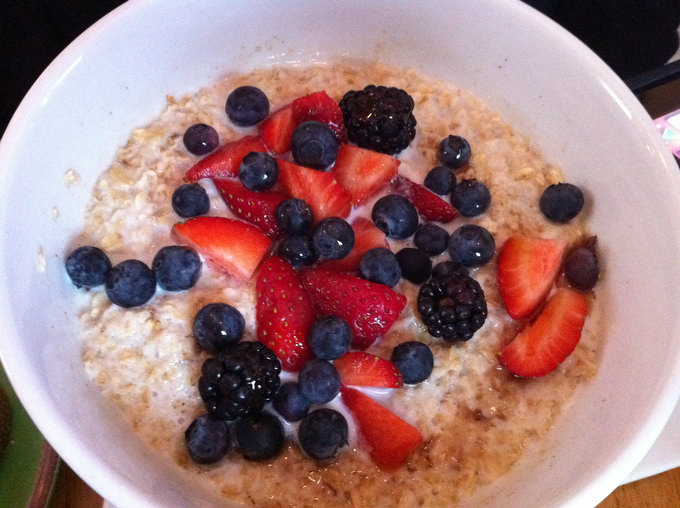 On Sunday, I was lucky enough to get a seat at the 6th annual Sausage & Beer dinner at Blue Hill at Stone Barns. I’ll post more photos from there, later, too, but here’s a few snaps: 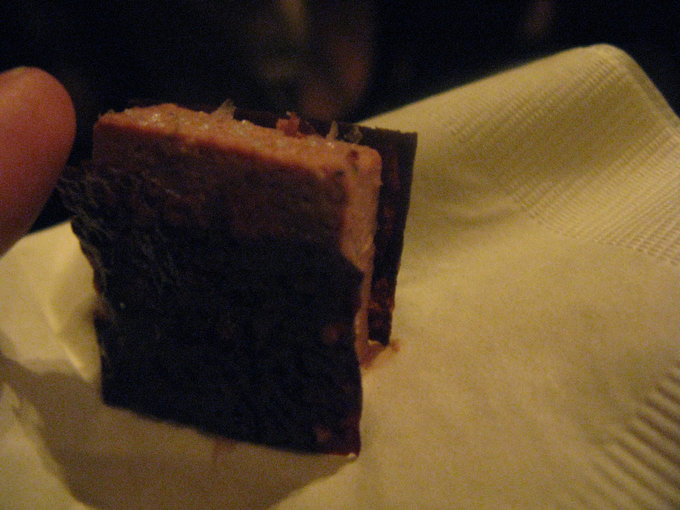 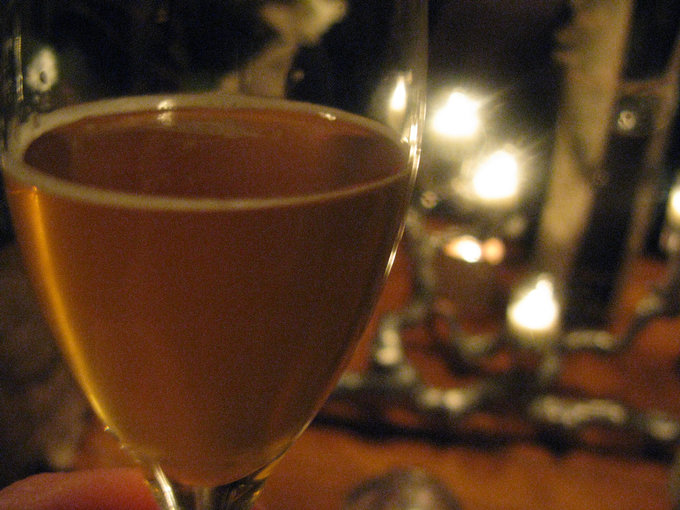 My favorite taste of the night was this beet sausage. No, it’s not vegetarian — there’s lard in the sausage — but it really tasted of beets. Fascinating!

It’s the link in front. In the back is a venison link from Halloran Farm in the Catskills: 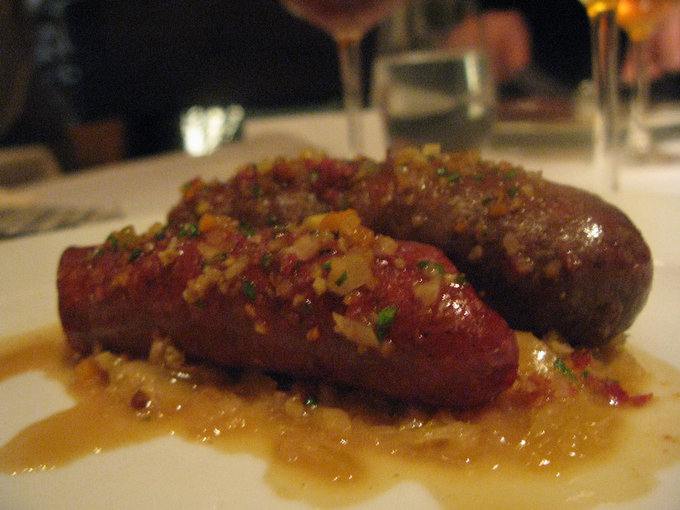 And with that, here’s what people have been talking about this week:

Julia writes about Super Bowl foods and notes that USA Today and Slice are paying attention to ZaZa in Scarsdale. (EDP) But Chowhounders dont think much of ZaZa.

Julia reviews Thyme in Yorktown Heights and pays it many backhanded compliments. (WM)
A bridal shower brunch at X20 in Yonkers? Why, yes! (CH)
Jeanne writes about what’s open on Monday nights in Westchester. (WM)
Worrying about a change in the kitchen in Peniche. (CH)
A review of 121 Restaurant in North Salem. (P)
MH likes Kraft Bistro in Bronxville. (NYT)
Chinese treats in White Plains and Scarsdale. (NYT)