People are reading
You are at:Home»Food Links We Love»Bistro Rollin Goes to Paris: 12 Bistros in 6 Days

Arthur Bratone, the owner of Bistro Rollin in Pelham, along with his son, Paul, and the chef, Manny Lozano, are going on a culinary journey to Paris. (Yes, insert fits of envy here.) 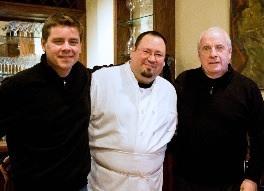 They’re planning on “researching” (no, really, they are!) 12 bistros in 6 days. See, as Arthur told me in an email, what we think of bistro food in Paris is changing, and fast:

We are going because there is an incredible amount of exciting stuff happening at bistros, brasseries and wine bars all over Paris.

Alex Lobrano’s excellent article in Saveur a couple of months ago, “The Best Bistros in Paris” highlights 23 bistros in Paris, some traditional, some cutting edge.

A lot of young and some not-so-young chefs (like Alain Ducasse at Aux Lyonnais) are finding the bistro route to their liking and more importantly to their customers liking.

In the Sunday’s NY Times Travel Section a couple of weeks ago you may have seen a small article under “Bites” by Christine Muhlke on Saturne a “cave a manger” that is run by a 24-year-old chef, with an equally young staff, an open kitchen, and as she says, uses “wild and rigorously sourced artisanal ingredients” with great success. Just another example of the innovation going on in Paris right now.

So that’s the plan: to go and see what’s new, become inspired, and bring it back to Westchester. They’re going to go to 12 bistros — or more — in 6 days.

Small Bites readers: They’ve volunteered to blog it here for all of us. So we can live (and taste!) vicariously through them. They’ll arrive in Paris a week from today, and plan on starting right in with lunch at noon.

I’ll let Arthur and Paul fill you in on the rest.

After the jump, Paul (on the left up there), explains how all this came about. Take it away, Paul …

So recently one of my partners (who also happens to be my father!) had one of the best ideas I have heard in quite some time – let’s hop on a plane with our chef and head to Paris for bistro inspiration – to recharge our culinary batteries if you will.

The goal is to hit twelve Parisian bistros in six days, with the focus on the new generation of contemporary bistros that have opened within the last ten years or so, many of which can be found in quiet residential arrondissements, like the 11th and 15th – a hike from the city center for sure but worth it due to their innovation and value.

The reason for this focus is because of the many parallels we see between our chef Manny Lozano and his decision to take the job at Bistro Rollin and that of many of the “new-gen” chefs in Paris.

Take for example Afaria, an inexpensive bistro in the 15th arrondissement run by Julien Duboue, who trained with such top toques as Paris’s Alan Dutournier and New York’s Daniel Boulud. Unshackled from the constraints of his former positions, Duboue is now free to pursue his love of Basque-Landais dishes such as a cheeky boudin noir “napoleon” richly layered with apples or a whole duck breast baked on a bed of grape leaves atop a clay roof shingle.

Now take Bistro Rollin’s chef Manny Lozano, who has been cooking since he graduated from high school, and who also has some serious kitchen creds. March with Wayne Nish, Aureole with Charlie Palmer, and probably most importantly, Sous-Chef at L’Absinthe with Jean-Michel Bergougnoux. With a pedigree like that he easily could have continued to pursue the four-star brass ring, instead he decided to make his next act a move to NYC’s 15th arrondissement (Pelham!), where he can run his own kitchen and pursue his own personal culinary passions – you’re starting to see the similarities between Manny and the new-gen Parisian chefs….oui?

Another interesting aside….Manny’s never been to Paris…has never been anywhere in France for that matter. The birthplace of the cuisine he has come to love and respect and refine with every meal he serves at Bistro Rollin is something he has only read about in magazines, only heard about from other chefs, he’s never been there for heaven’s sake… imagine the impact that this trip will have on him both personally and professionally.

As for me….the only time I have ever been in Paris was as a recent college grad backpacking through Europe, more concerned with where my next beer was coming from than absorbing the culinary landscape. Arthur has probably made close to a 100 trips to France over the last 35 years both for business and pleasure topping them off by living in Paris for six months with Barbara in 2008.

So you have an owner and a chef at a French Bistro in Westchester County who for all intents and purposes have never really experienced Paris and all that it has to offer, and another owner with years of experience who will have his own unique perspective on the trip – sounds like it might be a pretty interesting trip to follow – doesn’t it?

So do it…follow us on our Parisian bistro adventure through our live blogging, photos and tweets. Interact with us on Facebook, point us to places we should see…..sights, sounds, tastes of Paris, anything that you think might enrich our experience…we might not be able to hit them all, but I’ll be damned if we aren’t going to try.

We decided on making the trip in late February, not exactly the height of the tourist season. Arthur’s experience in Paris led him to believe it would be a perfect time to go. Paris is beautiful in winter and if you are lucky enough to get some snow, it can be spectacular in a way that most tourists never see. It is also perfect weather for many bistro dishes. There is also something special about coming in from a cold winter night to a small, comfortable room with great aromas emanating from the kitchen and sitting down to glass of excellent red wine, some wonderful bread and maybe a plate of olives while you peruse the menu in a relaxed and informal setting.

So on to planning, as I mentioned the focus will be on the new wave of Parisian bistros but this does not mean we are going to ignore the old-guard bistros in Paris, because getting a picture of how Parisian bistro dining has evolved over the last ten years HAS to involve getting an idea its roots.

We will also be attempting an early (i.e. 4am) trip to Rungis, the world’s largest wholesale food market outside of Paris, it employs over 15,000 people and is supposedly so huge that you need a car to travel from one building to another.