People are reading
You are at:Home»Restaurants»James Beard Award Semifinalists Announced: Eric Gabrynowicz from Restaurant North on the List for Rising Star Chef of the Year 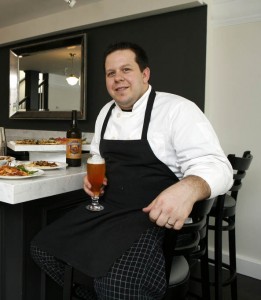 Eric Gabrynowicz from North in Armonk made the semifinalists list for Rising Star Chef of the Year — a national category in the “Oscars” of food. He’s up against chefs from across the country — all of them under 30 — who, according to the rules “displays an impressive talent and who is likely to make a significant impact on the industry in years to come.”

Here’s a link to Small Bites coverage on Eric Gabrynowicz.

The finalists will be announced on March 21, and the awards are May 9 at Lincoln Center.

The list of Restaurant and Chef semifinalists for the 2011 James Beard Foundation Awards, the nation’s most prestigious recognition program honoring professionals in the food and beverage industries, was announced today and is now available on www.jamesbeard.org/awards. Selected from a record 28,000 online entries, the prestigious group of semifinalists in the 19 Restaurant and Chef categories represents a wide variety of culinary talent, from exceptional chefs and dining destinations in 10 different regions across the United States, to the nation’s top wine and spirits professionals, best new restaurants and rising star chefs. (See this year’s full semifinalist list at the end of this press release.)

On Monday, March 21, 2011, the James Beard Foundation will announce the final Restaurant and Chef nominees, as well as nominees in all awards categories – including Restaurant Design and Graphics, Book, Broadcast and Journalism nominees – and special achievement award honorees during an invitation-only luncheon at the Oregon Culinary Institute in Portland, OR. The nominations will also be announced live via the James Beard Foundation’s Twitter page at http://twitter.com/beardfoundation. The list of final Restaurant and Chef nominees will include five finalists in each award category, narrowed down from the list of semifinalists by a panel of more than 550 judges. Winners in the Restaurant and Chef award categories, along with the Restaurant Design and Graphics award winners, special achievement honorees and America’s Classics award winners, will then be honored at the highly-anticipated James Beard Foundation Awards Ceremony and Gala Reception, taking place on Monday, May 9, 2011 at Lincoln Center’s Avery Fisher Hall in New York City. Winners of the Book, Broadcast and Journalism awards will be honored earlier in the weekend, at an invitation-only dinner taking place on Friday, May 6, 2011 at Espace in New York City.

”We are delighted to bring this year’s nominations announcement press event to Portland, where James Beard was born and where his first food memories were created,” says Susan Ungaro, President of the James Beard Foundation. “Today, Portland is home to so many wonderful restaurants and chefs, including five James Beard award winners, which is certainly a testament to the Foundation’s ongoing mission to foster and celebrate culinary talent from across the country.”

Established in 1990, the James Beard Foundation Awards recognize culinary professionals for excellence and achievement in their fields and continue to emphasize the Foundation’s mission: to celebrate, preserve, and nurture America’s culinary heritage and diversity. The annual James Beard Foundation Awards honor the best and the brightest talents in the food and beverage industries, celebrating outstanding achievement in each of the following categories: Restaurant and Chef, Restaurant Design and Graphics, Book, Broadcast, Journalism, and special achievement awards. Each category has an individual Awards Committee made up of industry professionals who volunteer their time to oversee the policies, procedures, and selection of judges for their respective Awards program.

How the Restaurant and Chef Awards Work

The James Beard Foundation holds an online open call for entries beginning in mid-October of each year. This year, over 28,000 entries were received, the most in the Awards’ history. Independent accounting firm Lutz & Carr tabulates these entries for the Restaurant and Chef Committee. Based on the results and eligibility requirements for each award, the committee then produces a nominating ballot that lists the semifinalists in each of the 19 Restaurant and Chef awards categories, some of which include Outstanding Chef, Outstanding Restaurant, Best Chef in 10 different U.S. regions, Rising Star Chef of the Year, Outstanding Service, Outstanding Wine and Spirits Professional and Best New Restaurant.

The list of semifinalist nominees is then sent to an independent volunteer panel of more than 550 judges from across the country. This panel, comprised of leading regional restaurant critics, food and wine editors, culinary educators and past James Beard Foundation Award winners, vote on specific award categories to determine the final five nominees in each category. The same judges then vote on these five nominees to select the winners. The governing Awards Committee, board of trustees, and staff of the James Beard Foundation do not vote, and the results are kept confidential until the presentation of winners in May.

The annual James Beard Foundation Book, Broadcast & Journalism Awards Dinner, an exclusive event honoring the nation’s top cookbooks, culinary broadcast programs and food journalists, will take place on Friday, May 6, 2011 at Espace in New York City. The following Monday evening, the James Beard Foundation Awards Ceremony and Gala Reception will take place at Lincoln Center’s Avery Fisher Hall in New York City, during which the Restaurant and Chef and the Restaurant Design and Graphics awards will be handed out, along with a number of special achievement awards, including Humanitarian of the Year, Lifetime Achievement and Who’s Who honorees, as well as the five America’s Classics award winners. All award winners receive a certificate and a bronze medallion engraved with the James Beard Foundation Awards insignia.

About the James Beard Foundation

Salt of the Earth, Pittsburgh

Higgins Restaurant and Bar, Portland, OR

The Mansion Restaurant at Rosewood Mansion on Turtle Creek, Dallas

The French Room at the Adolphus Hotel, Dallas

Lacroix at the Rittenhouse Hotel, Philadelphia

RISING STAR CHEF OF THE YEAR

Will Gilson, Garden at the Cellar, Cambridge, MA

NOTICE: The information contained in this communication is confidential and is only for the use of the intended recipient named in the email body above, and may be legally privileged and exempt from disclosure under applicable law. If the reader of this message is not the intended recipient, you are hereby notified that any dissemination, distribution or copying of this communication is strictly prohibited. If you have received this communication in error, please resend it to the sender and delete the original message and any copy of it from your computer system. Opinions, conclusions and other information in this message that do not relate to our official business should be understood as neither given nor endorsed by this company.