People are reading
You are at:Home»Restaurants»12 Parisian Bistros in 6 Days. Day One: A Stomach Bug and Disappointing Lunch, But Dinner Makes Up For It

Readers: Arthur has promised photos are on the way, but for now, here’s his report on the first two bistros he visited in Paris: L’AOC in the 5th and Le Régalade St. Honoré in the 1rst. *UPDATED NOW WITH PHOTOS!* 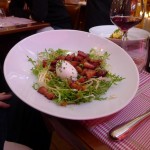 What a day! It all started off looking pretty good…in fact very good. Our flight over was uneventful and an hour early. We had arranged for someone from the apartment rental agency to meet us and turn over the keys and other basics, but since we were so early she wasn’t there yet when we arrived. So we parked our bags in the little courtyard inside the door from the street (we had the door code via email) and went off looking for a place for coffee. We found a spot around the corner, with folks on their way to work popping in already for their cup of coffee (at 1.5 euros-a lot cheaper than Starbucks) and we settled in to soak up a little Parisian street life. After a bit I called our contact who apologized and said she would meet us at the apartment in a few minutes. We finished up our second round of coffees and headed back to the apartment where Agnes was waiting, She was gracious and helpful and apartment is gorgeous and huge. Three bedrooms and baths, two living rooms, a full modern kitchen, all spread over three floors and facing a courtyard.
We unpacked and began to get ready for our first meal but some ominous signs began to appear. My son, Paul, said he wasn’t feeling very well but we all thought it was jet lag and everything would be fine, so we headed off for lunch at L’AOC on the rue Fosse Saint Bernard in the 5th not far from where my wife and I had lived, and while not one of our first choices, had come highly recommended.
We took the metro — 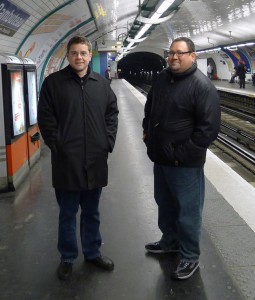 — and by the time we got there Paul was sinking fast. We all sat down for lunch in a very attractive wood paneled and mirrored dining room with a nice crowd for a Tuesday during school holidays. But, in a couple of minutes Paul had to excuse himself and headed for the men’s room! He then spent the rest lunch throwing up or walking in the cold sunny air trying not to. He had contracted a stomach virus at the worst possible time: Our first day of an eating tour of Paris. He was distraught to say the least! And, so were we. This was meant to be a group exercise all lending our differing views and all sharing in the experience. Losing one of us was very depressing. Our only hope was that he would rally quickly.
By that time lunch had been ordered and was on its way, so Manny and I soldiered on. Paul did not miss much in this first very disappointing meal. Before Paul crashed he had ordered a frisee salad, something that we pride ourselves on at Bistro Rollin. It came our looking very attractive, but the egg was hard-boiled! A cardinal sin. You need the yolk soft so that when you cut into it the yolk will mix in with the vinaigrette and create the wonderful silky smooth texture that works so well with the slightly bitter frisee and salty bacon lardons.

I had ordered a fish soup that was a daily special. It looked good as it was ladled into my bowl by our server, but lacked any distinctive flavor, was not hot enough, and had a dollop of a rouille of some type in the center that was actually cold and tasteless. All and all a very disappointing dish.
Manny had chosen much better and had ordered the bone marrow with garlic toast. It looked and smelled great when it arrived and tasted delicious, though Manny and I agreed that the toast had too much garlic and that overwhelmed the subtle taste of the bone marrow. 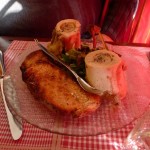 Small problem in a very good dish.  We both had pork dishes, he a suckling pig and I had a chop. Neither very good, both rather dry and tasteless. Nothing learned here,,,except maybe that Bistro Rollin is a lot better than at least on Paris bistro!
We were scheduled for dinner at Le Régalade St. Honoré, the second restaurant for chef Bruno Ducet, who has established a stellar reputation over the past 7 years at the original Régelade in the outlying 14th arrondissement. In spite of his reputation and our deep desire to go, to tell you the truth with jetlag catching up with us and Paul going down, Manny and I weren’t sure we would be ready to go again in 3-4 hours, but we decided to go back to the apartment take a short nap and decide then.

Fortunately for us we felt revived after our nap and even though Paul was still down we decided to go on to Régelade for dinner. And, boy were we glad that we did. An outstanding dining experience in a modest, unpretentious place, but suffused with warmth and hospitality and some of the best food that chef and I agreed we had had in a very long time — all for 120 euros for the two of us.

We introduced ourselves as the owner and chef of French bistro outside of NYC and were immediately asked if we would like to meet and talk with the chef. We, of course said we would be delighted. Two very efficient and professional young women handled the entire small dining room. Food was prepared in a small but very well equipped kitchen partially open and passed directly to the servers at one end of the dining room.

We studied the menu and the specials written on a chalkboard – no restaurant computers here. As they ran out of specials one of the young ladies who come over with a damp cloth and wipe it off the chalkboard. We, of course, each ordered a different dish at each course. But, before you even order they bring a huge beautiful paté in a ceramic crock to the table with large jar of cornichons, wooden tweezers to pick them up and some fabulous freshly baked bread. This could easily be a meal in itself.
As we started on the paté (which that night was chicken liver and pork) we placed our order. I started off with Calamari over a Risotto cooked in the ink. 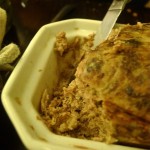 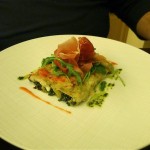 Sounds like we are in Italy not France, but almost every bistro offers a pasta and risotto option, but done in a very French style. They were beautifully presented and utterly delicious. Perfectly seasoned, and  wonderful combinations of textures and tastes. As we were scraping up the morsels, Chef Doucet came out. A young, dynamic handsome guy, who is working like crazy running two great restaurants in the opposite sides of town.

Later on, as we were walking away after dinner, we saw him hop in his motorcycle and head off to his other restaurant to check on things before they closed. He was interested in what we were doing and chef and he had a great conversation while I listened in. 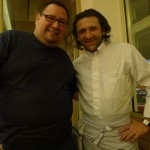 He went back to work and so did we! After the fabulous starters we find a mid-course arriving as Chef Doucet’s treat. A menu item which we had considered. Scallops still in their shells with paper thin slivers of late winter black truffles on top and tiny croutons to soak up the natural juices from the scallops. 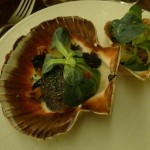 Only one thing to say – Outstanding! Again gorgeous to look at, and even better to eat.

Next, were our main courses. I had the Turbot over Sautéed Mushrooms of several varieties — 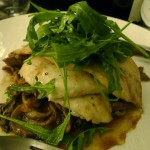 — and Chef had Pigeon with Black Truffles that came with a side of Whipped Celery Root. Both excellent, but not quite up to the extraordinary standards of the first courses, but only because the bar had been set so high!

I finished with Grand Marnier Soufflé and Chef had a Cheese plate. 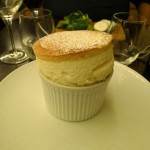 My soufflé was light as air and perfect end to the meal. 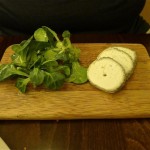 Chef’s cheese completely unadorned. No dried fruits, no quince paste, no nuts, nothing but three perfect pieces of chevre and some more of their delicious bread!

So ended our first day. It is now Wednesday, and the good news is Paul has fully rallied and was able to join us for another fabulous meal today for lunch, but more on that tomorrow!