People are reading
You are at:Home»Restaurants»Bistro Rollin Goes to Paris: Lunch at Jadis – Wow! – Worth a Detour

Small Bites readers: This is Paul Bratone, owner of Bistro Rollin in Pelham, reporting on his culinary trip  to Paris this week.

I am picking up the blog with arguably the best meal we have had during the trip, at a restaurant named Jadis. 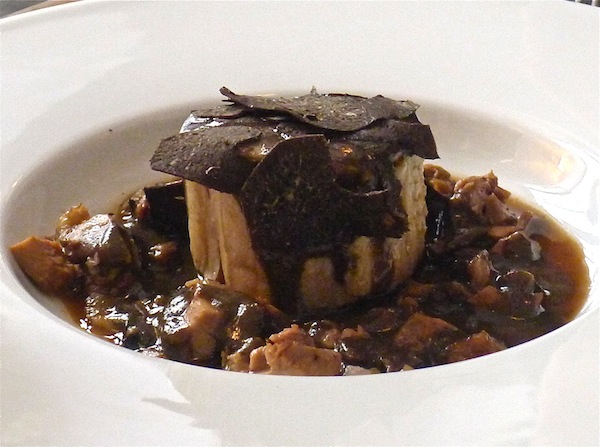 First — a little explaining. We won’t be getting to our 12 bistros in 6 days. On Wednesday night, we were swayed off our path by a friend of my father’s who lives in Paris and suggested that a must for me and chef, essentially both first-timers in Paris, was to meet for drinks at Cafe Flor on Boulevard St. Germain. It was great, a tourist spot for sure, but still a great place to have a drink and people watch. We did not have dinner reservations that night but were planning to pick from one of our extensive list of back up bistros. But Marc, our Parisian friend insisted that we needed a break from French food and that we must go his favorite Indian restaurant. The more I protested that I really didn’t like Indian food very much the more Marc insisted I had never had really good Indian food!  So it was that we were dragged kicking and screaming.  Suffice it to say, we had a great time and the food was OK – a slight detour to cleanse our palates and a lot of fun. 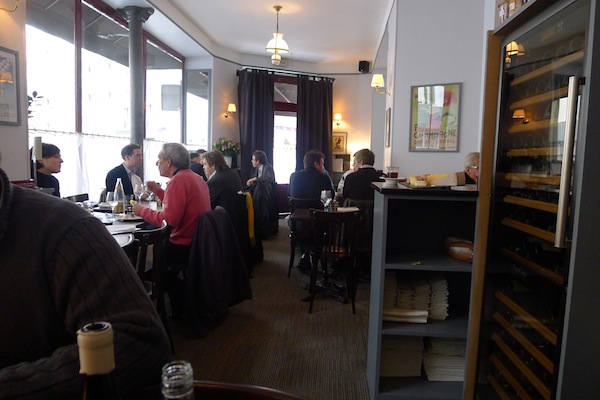 Me, left, chef Manny in the center and on the right, chef is William Delage: 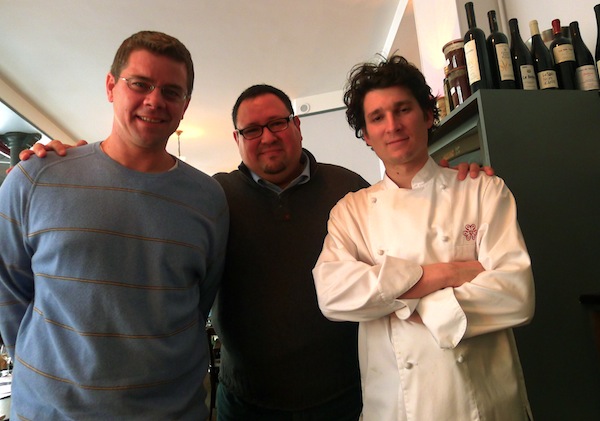 He was trained by Michel Bras, Pierre Gagnaire and Frederic Anton. The place has been open around 5 years, chef is 30 years old. So as you can see – a perfect example of our target restaurant in Paris, young chef, classically trained in top-notch Parisian kitchens who strikes out his own to make his own mark on the world…..and quite a mark it is, lets get started because this was a FANTASTIC meal in every aspect.

To start, the waiter not only remembered that we were restaurateurs visiting from the states but that we were from Pelham…very impressive. 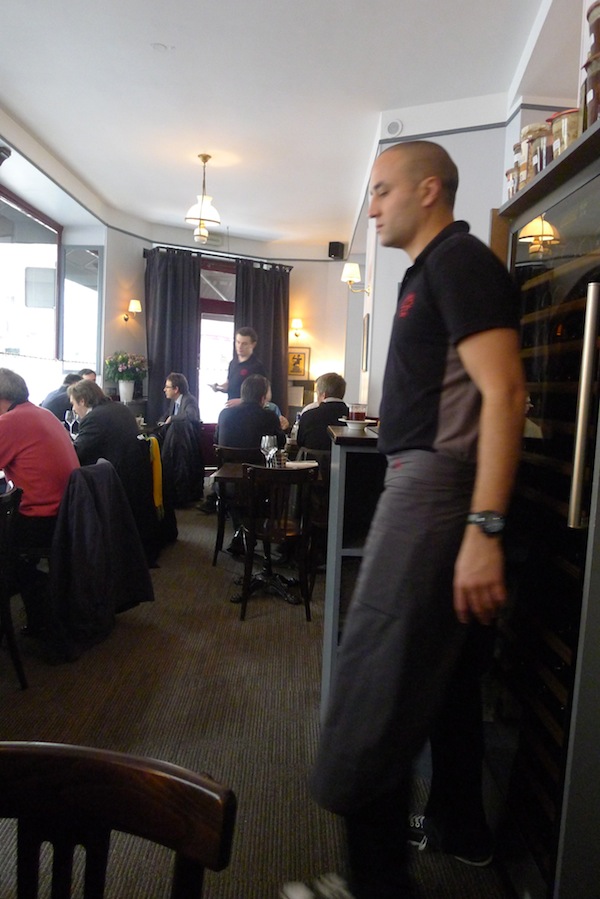 A couple of recurring themes that we saw once again at Jadis, as I mentioned before, no tablecloths but elegant linen napkins, high-end crystal and cutlery, no bread and butter in the table until the apps arrived. The bread and butter thing was intriguing so we asked the waiter about this custom and he said it was a very simple economic decision, the bread and butter is so good  — 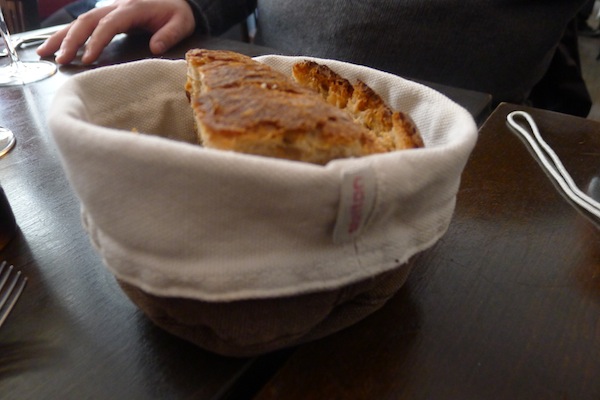 — that diners would fill up on it and not order a first course, makes sense doesn’t it…I wonder how our customers would react if we held ou on the bread until apps arrived (cue sounds of riot starting).

So onto the food…and oh what food it was.

I started with the charcuterie platter, seven different types of cured meats on the plate, saucission, blood sausage, chorizo just to name a few of them, each a unique and contrasting taste…check it out: 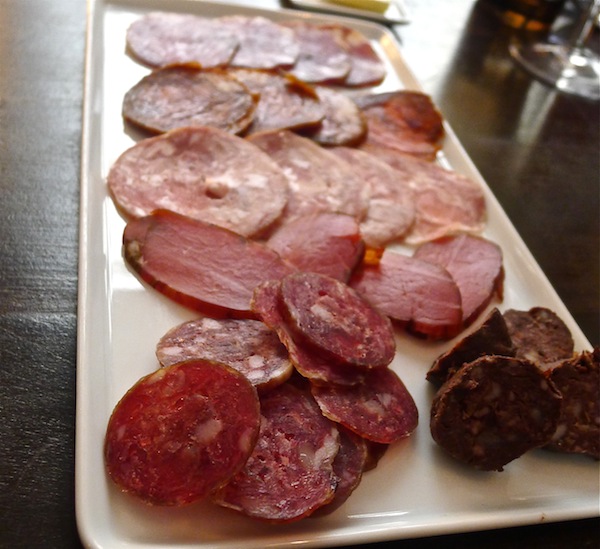 As good as my appetizer was, it paled in comparison to the two others. Manny put himself in the chef’s hands (smart man), and his first course was a beef, spider crab and mackerel tartare…observe: 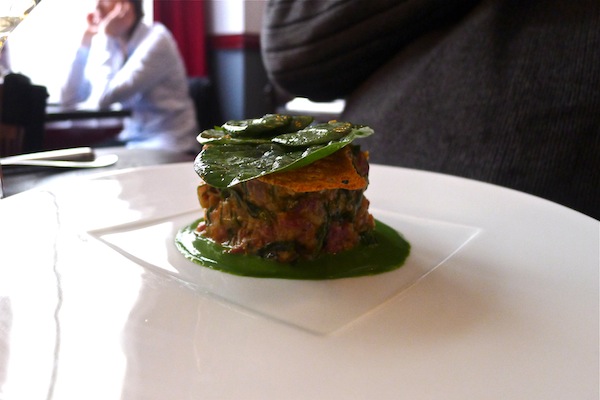 It’s hard to describe the ethereal blend of textures and flavors, the fish and crab mellowing the rich flavor of the beef, the most interesting take on tartare I have ever experienced. Arthur had an equally impressive appetizer. It was called oeuf poch’ en muerette, salade de pissenlits et lard ce cul noir what we called it was the best bacon and eggs that could ever be conceived. Egg was medium poached (perfectly, of course), the lard and sauce complemented each other perfectly…..truly amazing. 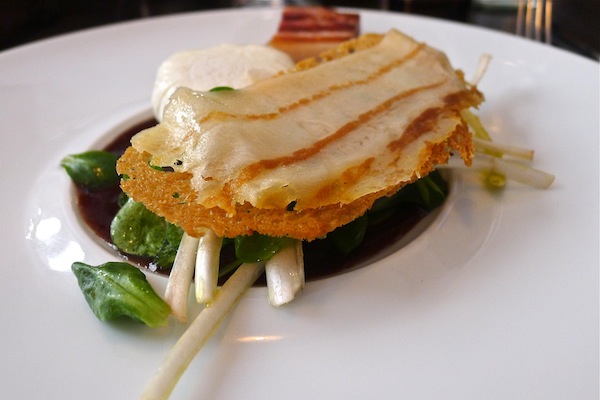 As good as the apps were, the entrees exceeded them, so without further adieu…I chose the grilled scallops with Jerusalem artichokes and chorizo. 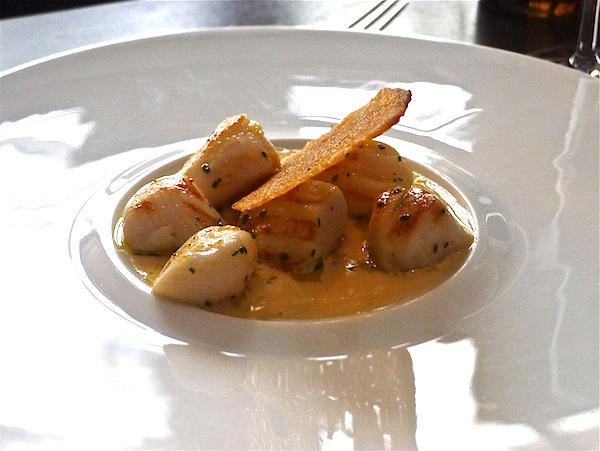 The scallops perfectly cooked, light, sweet and juicy, the chokes and chrizo sat in a greaseless emulsion that complemented the ingredients without overwhelming any aspect of the dish…in a word…..WOW.

Manny had chicken cooked sous vide smothered in black truffles (chefs choice again) that was without exaggeration the most perfectly cooked fowl I have ever encountered. And although I am prone to overstatement and irrational exuberance (as our Parisian friend tactfully pointed out at dinner the other night), this is no joke – moist, tender, full of flavor with each ingredient discernible without overwhelming any of the others.

Arthur had a stuffed veal breast also cooked sous vide, and the result was the same. Perfectly cooked meat, with the sauce melding together with the stuffing to create a cohesion of flavors that was outstanding….another triumph. 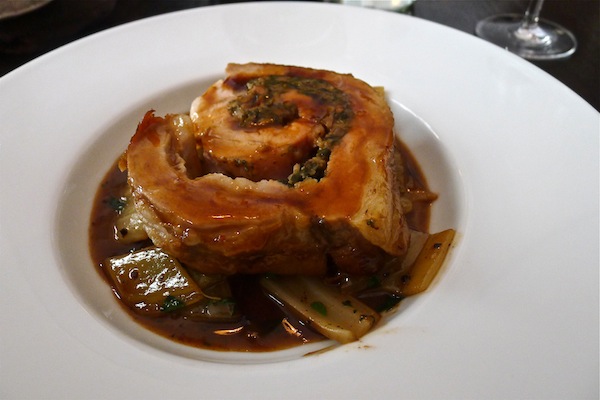 Almost forgot – a wonderful wine to accompany the meal as well, a St. Aubin white burgundy – crisp and delicious. 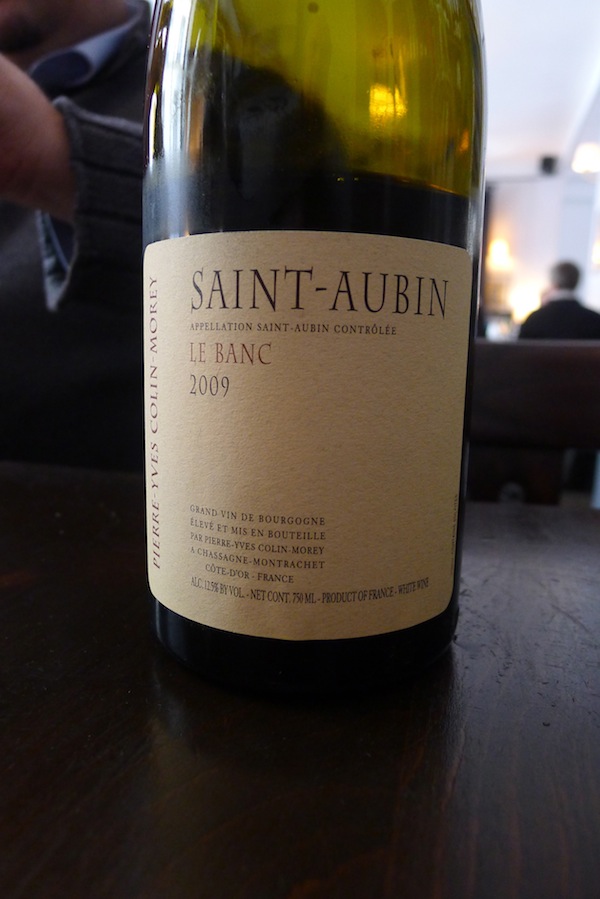 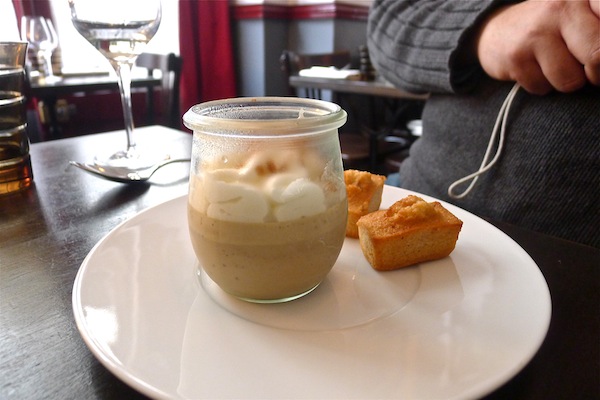 Pistachio floating island in a chocolate crème anglaise for me: 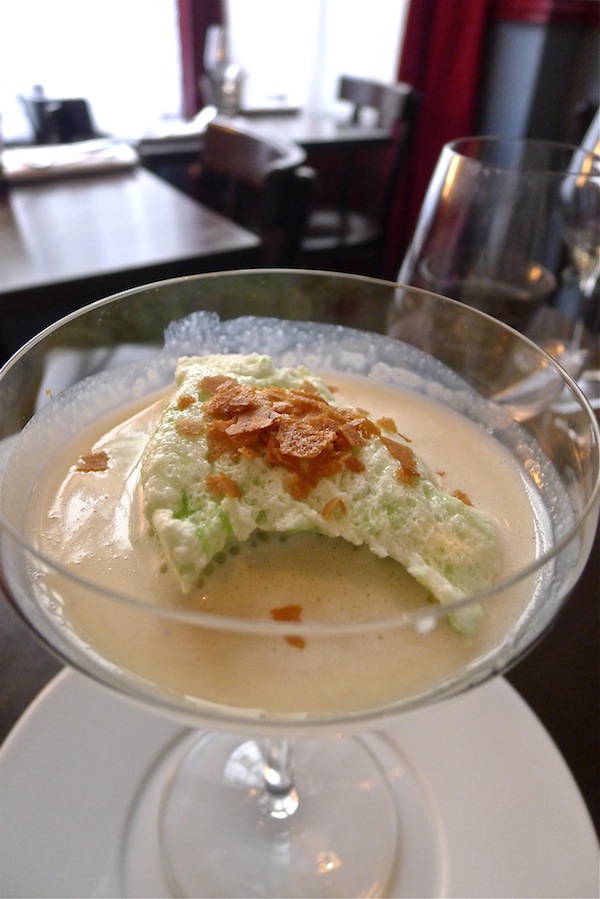 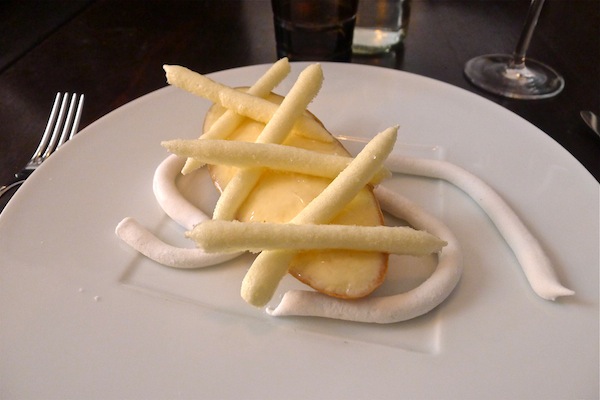 I could go on and on again about how awesome they were. This was very special. Chef Delage has been getting the respect he deserves and we discussed his plans for his second restaurant scheduled to open in June on the Boulevard St. Germain near Notre Dame! Keep and eye out for it!