People are reading
You are at:Home»Restaurants»L’Ami Jean: Bistro Rollin Goes to Paris

Small Bites readers: This is Arthur Bratone, owner of Bistro Rollin in Pelham, reporting on his culinary trip  to Paris last week. Sorry the delay in posting! This is the final installment.

It is hard to believe that we are about to eat our last ‘bistronomique” dinner in Paris. Tomorrow is Sunday, and all the bistros we are interested in are closed. It will be a day for sightseeing and maybe some oysters at a brasserie. As you can imagine the week has flown by!

But tonight is L’Ami Jean. When Paul and Manny were finishing lunch today, Bertrand Auboyneau, the owner  of Paul Bert, asked them where we had been eating and where were going tonight. When he heard L’Ami Jean he heartily approved and said that chef Stephane Jego was a little crazy but one of his best friends, so he wrote a note on his card and told Paul to make sure he got it when we arrived! Sounded good and was good! 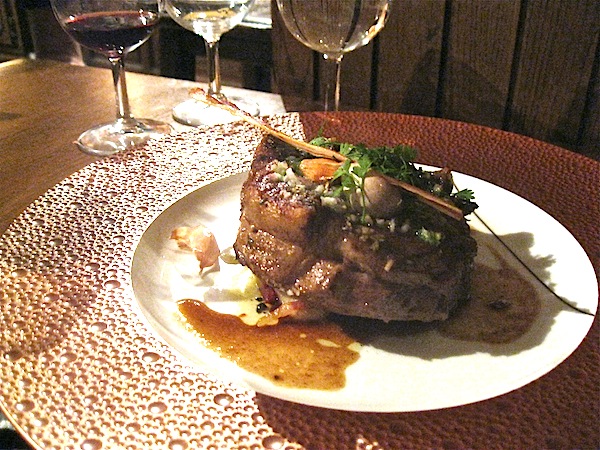 We arrived at 8 when we had made all our reservations and were joined once again by our friend Marc. 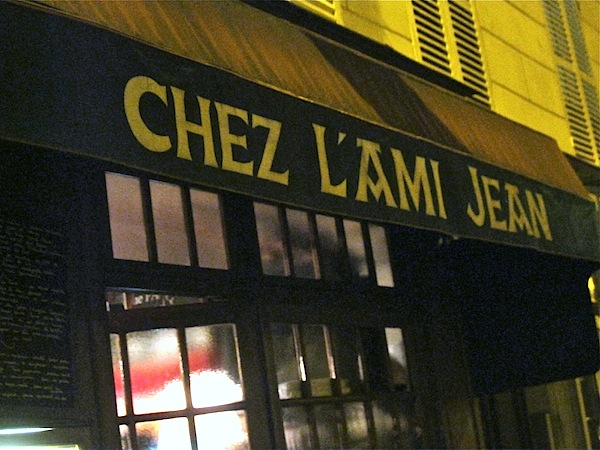 We walked in and the place was jumping. Paul gave the card to the hostess and we hoped it would find it’s way to chef Jego, and sat down at another plain wooden table pretty close to another similar table with four folks from Japan. 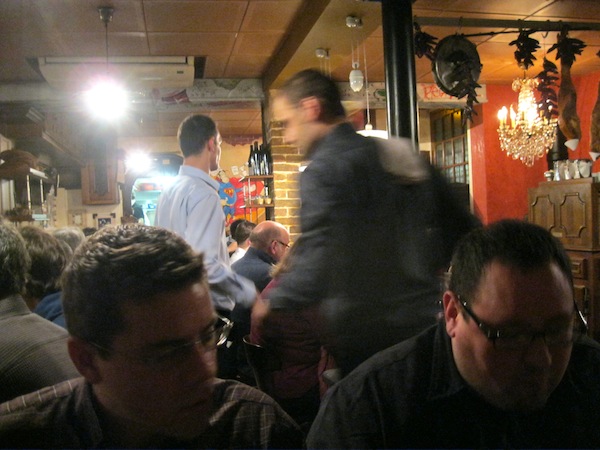 An extremely attractive and friendly server-manager got us seated and our waiter took over. We discussed having the tasting menu but it was 80 euros without wine and we were not looking to spend that kind of money on dinners. It was also seven courses and we were just not in the mood for that. 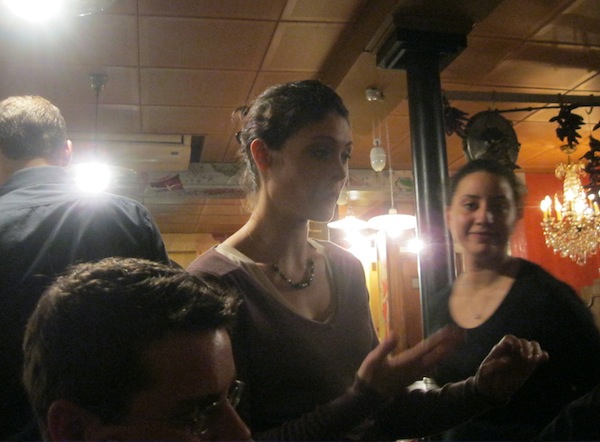 We asked the waiter for some suggestions and he recommended we start with a Charcuterie for the table. This was a Basque restaurant and they are known for their charcuterie. We agreed that would be how we would start. Turned out to be a great choice. An unbelievable selection of patés (that Marc said reminded him of those his mother used to make!) hams, sausages and other cooked meats began to arrive. Along with delicious baskets of bread! 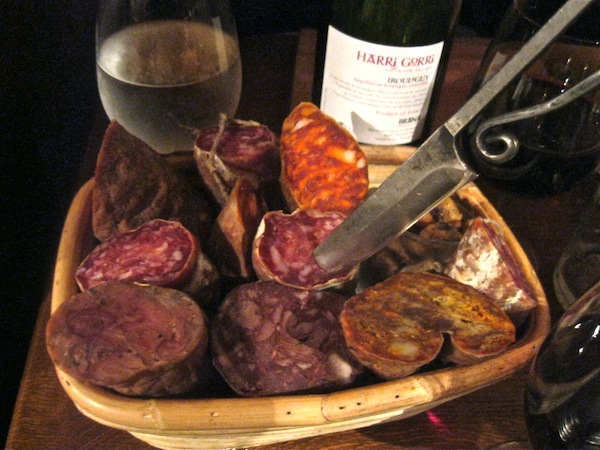 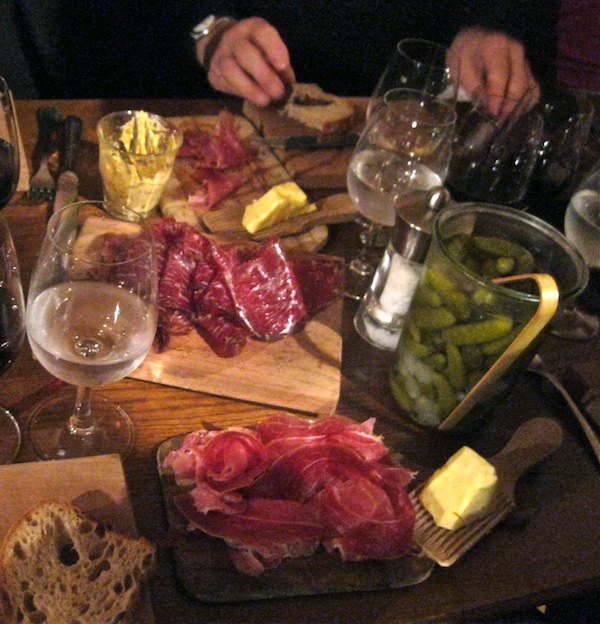 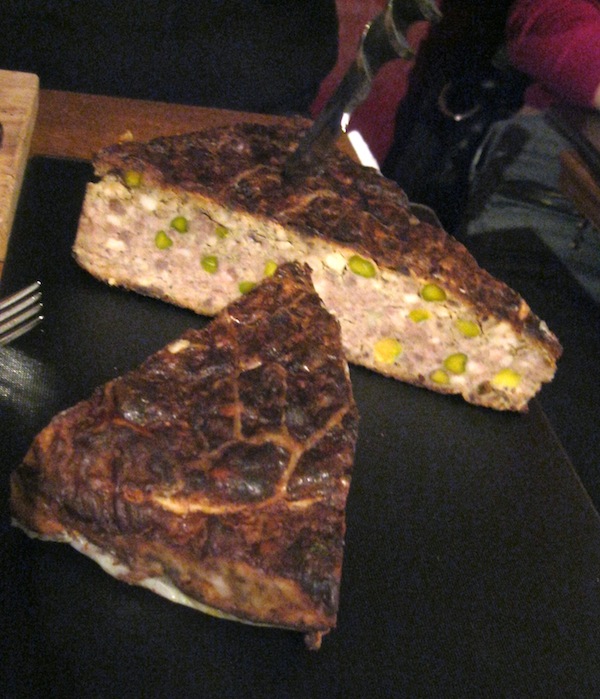 Paul and I had decided to share a beef dish for two, Manny ordered the sweetbreads, and Marc a veal chop as our main courses. So far, no evidence that our note to the chef had arrived! But after we had managed to do serious damage to the charcuterie, and would have been expecting our main courses, additional course began arriving.

First was a delicious soup that even chef had a hard time parsing out the ingredients, but all agreed it was extraordinarily good. This was followed by strange dish that we were never able to get a clear description of. The place was really busy by now and we didn’t want to pester the waiter too much. We all liked it but were not crazy about it. It was like everything we ate in France, very attractively presented, see the picture below. 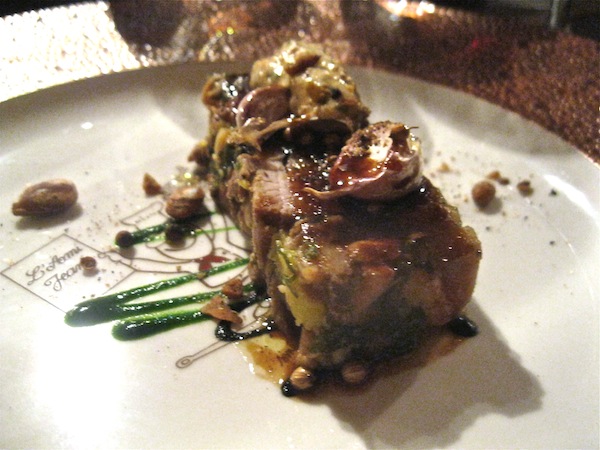 We had now demolished a charcuterie big enough for 10, had a soup course, a third course and now arrives our mains! For Paul and me platters of beef topped by huge globs of beef marrow. 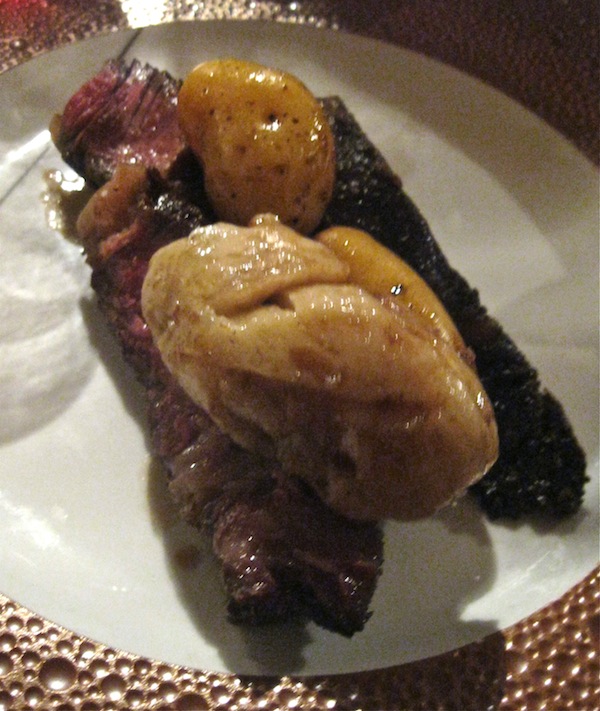 For Manny his sweetbreads 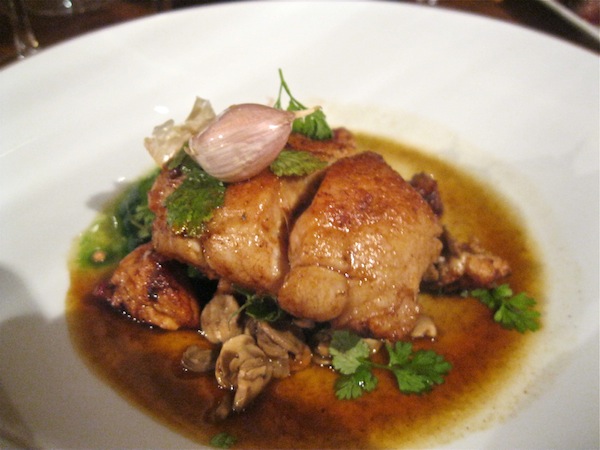 And for Marc his Veal Chop.

This is serious eating. I am proud of the work we are doing! Our waiter was terrific and he and Manny were having a ball. 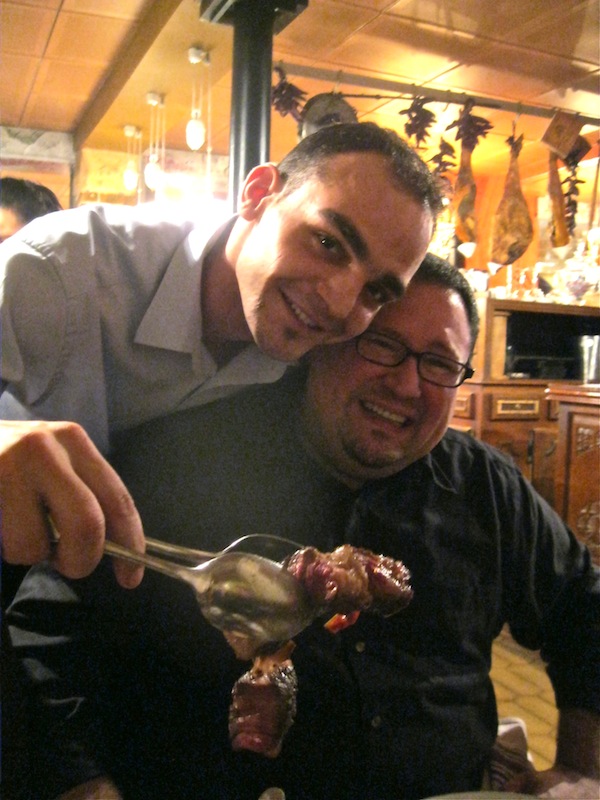 We started with a Basque wine that was interesting but not our favorite, we then went to Cotes du Rhone that was perfect with the meats. Everything was delicious. Marc thought that his veal chop was a little underdone, but he can be a little picky at times. The table next to us was having the tasting dinner and it looked terrific. Next time I might give that a try.

An absolutely fabulous way to end our eating tour of Paris! Delightful servers, great food, wonderful ambiance. Warm, delicious, welcoming, what more could anyone want? Below is our chef. A little crazy…maybe? But crazy good…without doubt! 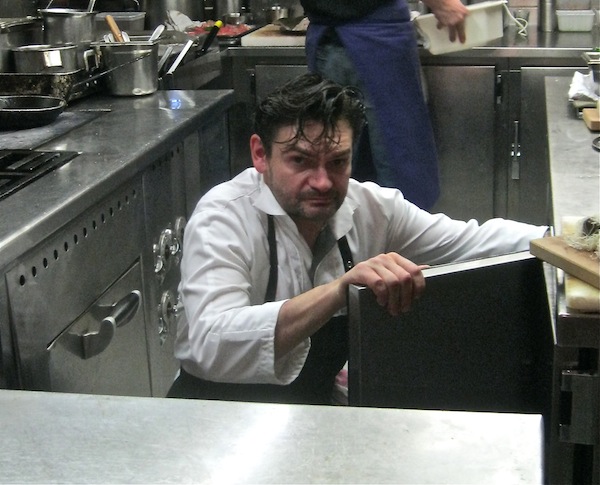