People are reading
You are at:Home»Restaurants»L’Ecailler du Bistrot: Bistro Rollin Goes to Paris

Small Bites readers: This is Paul Bratone, owner of Bistro Rollin in Pelham, reporting on his culinary trip to Paris last week. Sorry the delay in posting!

So today represented a unique opportunity — an intentional departure from our previous style of bistro meals.

After a light breakfast in the apartment of croissant, reblochon cheese, dry cured ham, duck confit rillettes (which is shredded duck confit meat mixed back in with duck fat to create a kind of heavenly pate) and fresh baguette, we waddled out the door to the next stop on our gastronomic tour de force.

L’Ecailler du Bistrot is famous for seafood of all kinds, particularly raw oysters, raised on the owners own oyster farm in Brittany. Given this reputation and our protruding waistbands, Manny and I decided that we were going all raw bar…but we ended up going LARGE. 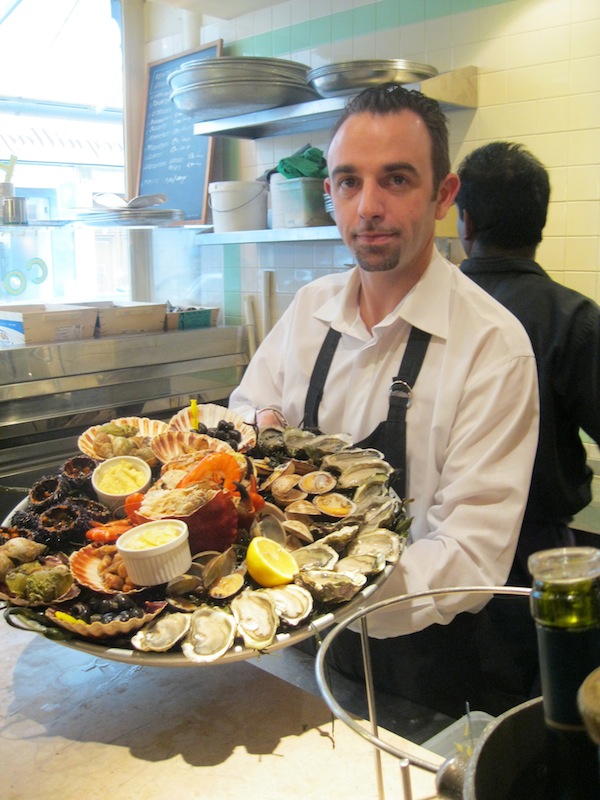 At Bistro Rollin, oysters have become an important part of our menu. We now over at least four varieties on the half-shell almost every night and try to have a selection of both East Coast and West Coast. We are also very proud of the quality of our fish. So we were fascinated to see what full seafood Parisian bistro would be offering. We just had to just had have a large sample size a proper statistical analysis!

On the walk to the restaurant two things caught Manny’s eye! One in a food shop window. Now that is a quiche that any man would eat! 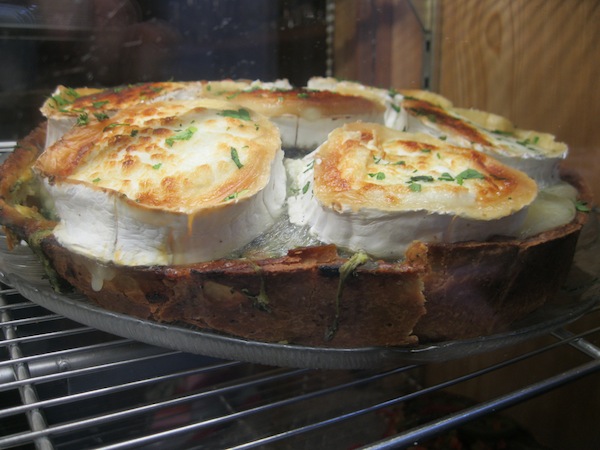 The second was at the curb. Let’s drive that to lunch! 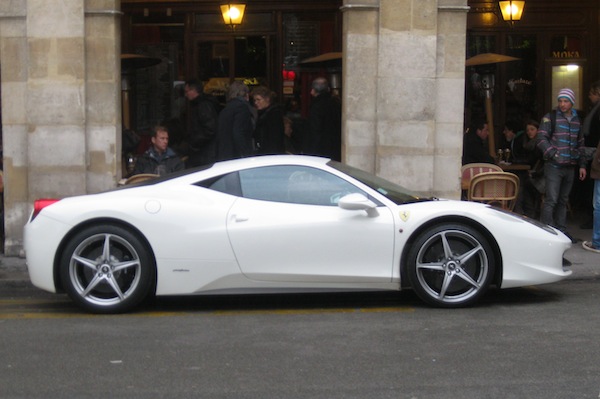 Dad decided to skip lunch today, better to prepare himself for tonight’s sure-to-be-epic dinner at L’Ami Jean…but more on that in a few.

So Manny and I forged ahead, confident that we would be able to eat “light” at lunch and preserve our delicate constitutions….didn’t quite work out that way however…observe:

Wasn’t so much the raw shellfish plateau as the delicious bread, fantastic butter (two kinds, one w/ sea salt and the other infused with different types of seaweed) and the bottle of crisp Muscadet from Brittany. 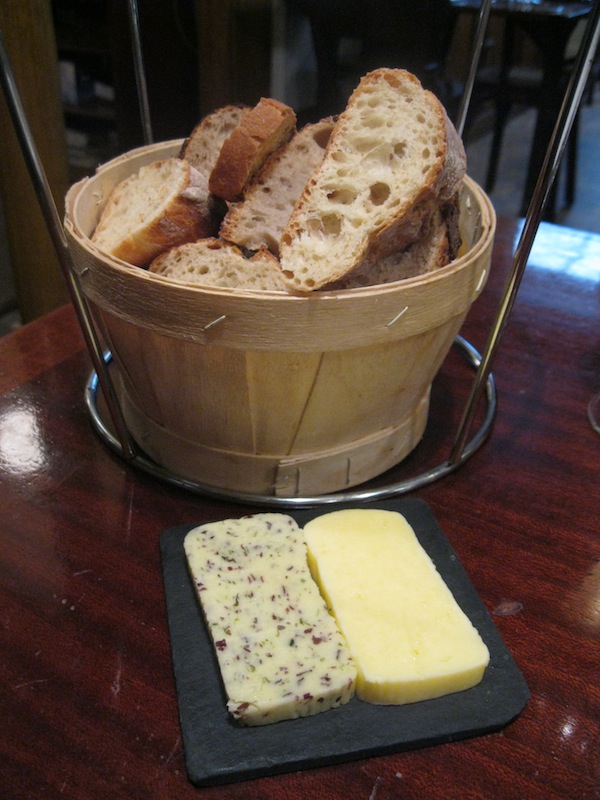 Oh..and I almost forgot, an aperitif of champagne and an amuse bouche of salmon rillettes. 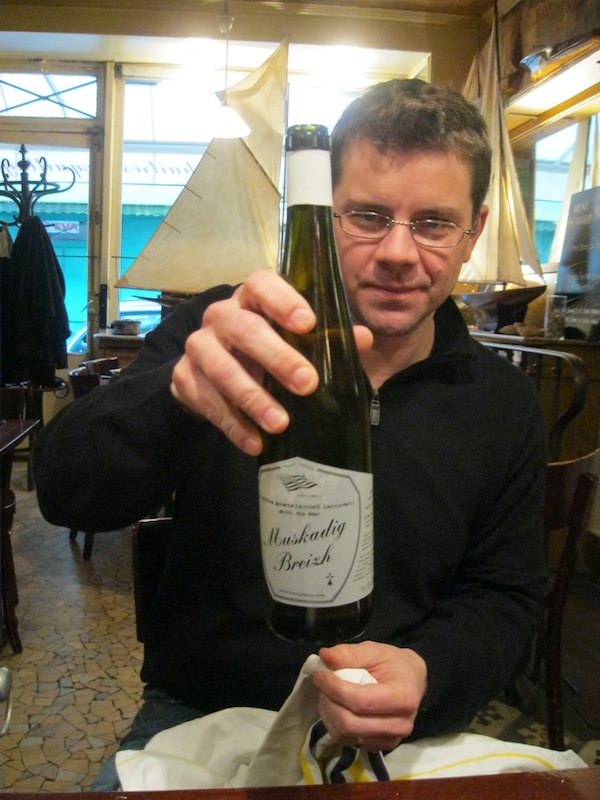 What you see on the platter are small sweet shrimp (eaten whole, heads and shells included) a few larger shrimp, a whole jumbo tourteau crab, two types of clams, a dozen oysters, fresh sea urchin, periwinkles, and whelks. To top it all off the owner sent us four Belon oysters that we slurped down with some fresh ground pepper on top – the owners suggestion. As I mentioned before….light lunch. Notice that Manny and I left no stone unturned. 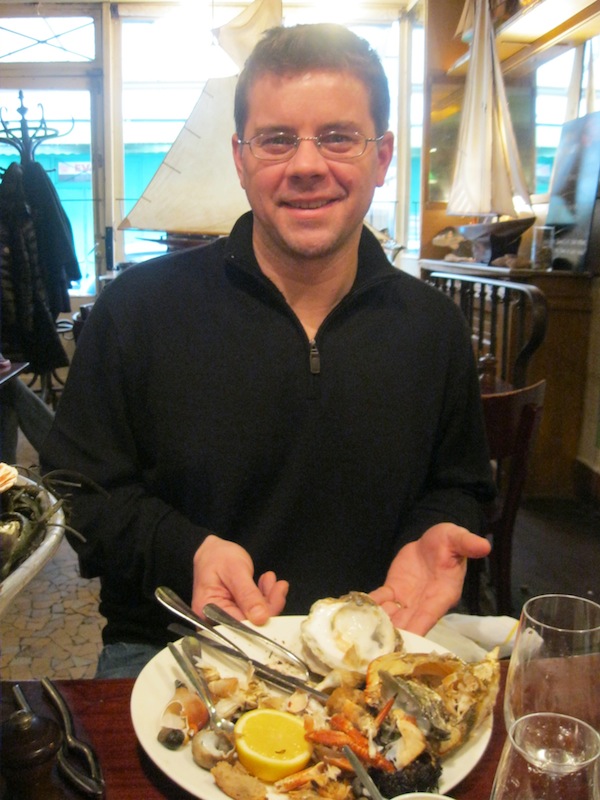 They also offer a lobster menu, check out the Blue lobsters from Brittany that they bring in.

At the beginning of our meal the waitress mentioned that the owner, Bertrand Auboymeau, would like to meet us and invited us to his other restaurant next door (Bistrot Paul Bert) for a coffee and a chat after lunch.

He was a great guy, friendly and open, we discussed his family oyster farm in Brittany, his plans for an organic vegetable farm to supply his restaurants, family, children and the like, truly enjoyable company. 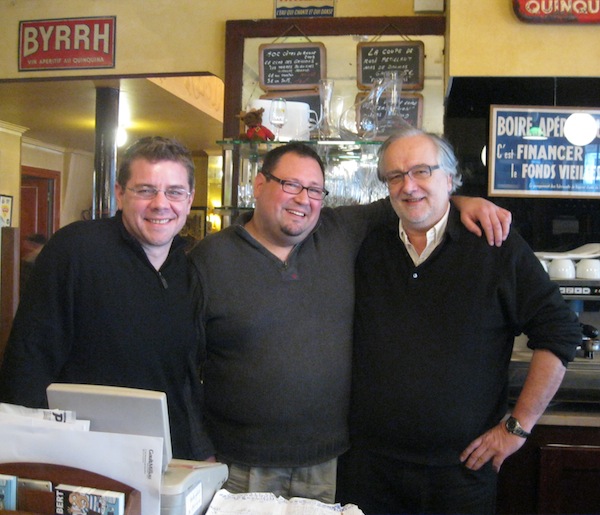 He has a great way of storing his wine. He found old wooden doored refrigerators and had them refinished to store his wine and installed chalkboards on the inside of each door listing the wines in each locker 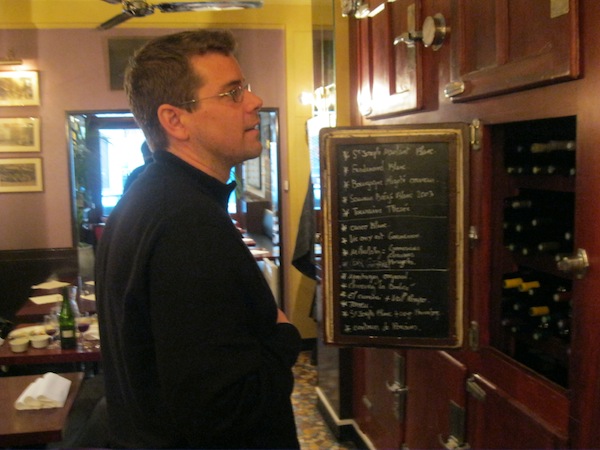 And to cap it all off he asked us where we were going for dinner that evening, when we told him it was “L’Ami Jean:…he said great choice, and mentioned that the chef happens to be a close friend of his. He grabbed one of his business cards, wrote a brief note on it, signed his name and told us to hand the owner the card when we got there and to put ourselves in his hands…should be interesting…stay tuned.

We exchanged emails and promised to stay in touch. We, of course, invited him to be our guest at Bistro Rollin and he said he would be delighted! With that we strolled back through the Paris streets thinking of dinner!