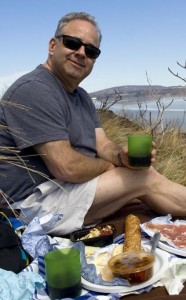 As a kid in Brooklyn,  Simon Feldman always had some of that mad scientist running in him.  Driven by a chemistry set his parents gave him, Simon was determined to make big things happen, figure out the meaning of life, or at least cause a small explosion trying.  Unable to blow anything up with the chemicals in his set, Simon expanded his search into the kitchen, seeing that the spice bottles were of similar shape and size to the ones that were in his chemistry set, it seemed a reasonable place to start. Simon went back to mixing.  While still unable to blow up anything, Simon did develop an interest in spicy cooking.

Simon graduate from John Dewey High School in Brooklyn N.Y. and earned  his degree in Communications/Psychology at Antioch College,in Yellow Springs Ohio, as a student there he also opened and ran “The Last Resort Cafe” an on campus coffee house .

He’s now a producer and director and the creator of “TheCooksPlate.com”  an Internet TV food channel covering the food and beverage scene. The web site also features cooking demos with local chefs and visits to area restaurants and purveyors in the Hudson Valley.