Hi, I’m Sharon Pickett. I was so excited to kick off Hudson Valley Restaurant Week that I headed down to Chutney Masala Bistro in Irvington for lunch – couldn’t wait for dinner. I had sampled the restaurant’s buffet at several literary events that have been held in the large upstairs room and I was looking forward to ordering from the menu, where I find that entrees are often more delicate and finely crafted. 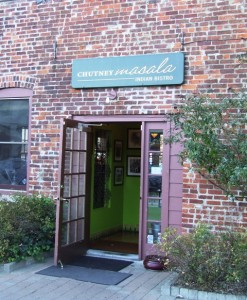 The restaurant itself is a jewel box – lime green foyer, saffron walls, exposed brick and highly polished dark wood. On the walls are framed black and white photos depicting the splendor of India’s colonial era.

All the appetizers looked appealing but what really jumped out was puli rasam – described as being “a lentil-based tomato and tamarind soup served with lentil crisps.” Knowing that Indian restaurants aren’t big on soups – sure a little mulligawtany but not much else – I was intrigued.  My companion ordered the chili chicken – described as “Indo Chinese style spicy chicken in a ginger soy sauce.” 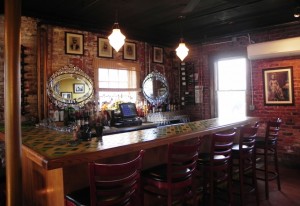 We were tempted by the selection of Indian (as well as domestic) beers but refrained, since it wasn’t much past noon. Next time. (The restaurant has a full bar as well as wine by the glass and bottle.)

The waiter advised us that these dishes were spicy and we said “Bring it on!”

I won the appetizer round! The soup was divine! Redolent with finely minced garlic and cilantro and studded with whole curry leaves, it was the perfect balance of flavors.  My 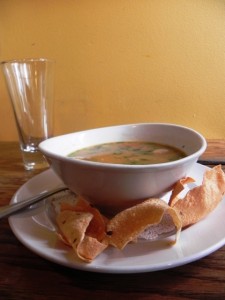 companion’s chili chicken paled in comparison – perfectly fine, but no puli rasam.  He enjoyed it though – he finished it before I could take a photo.

We began to wonder though about our “Bring it on!” comment. The appetizers were mildly spicy but not infernal. I had a feeling that they knew that I was a Restaurant Week blogger and they were afraid to, shall I say…”skunk us.”

For my entrée I selected chicken tikka masala and my intrepid partner chose Goan shrimp.

A lesser restaurant would have omitted the step of cooking the chicken in the tandoor. I have had this dish with chunks of poached chicken breast but Chutney Masala went the extra mile.  The chicken pieces were slightly smoky and singed, making them a perfect match for the creamy tomato sauce.  The addition of fenugreek seeds brought the dish together perfectly. 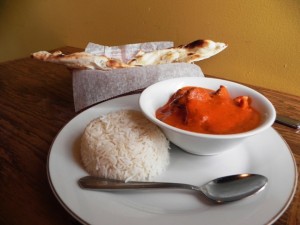 The order of Goan shrimp arrived with six plump, super fresh crustaceans bathed in a sauce of coconut, tamarind, ginger and who knows what else. Perfectly spiced, with no ingredient overpowering the other.

Each entrée came with warm nan and basmati rice. 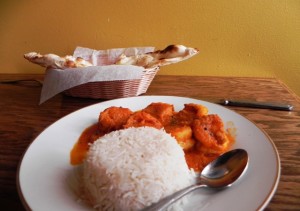 I’d have to call the entrée round a draw.

But still not really spicy.

For dessert, we chose to split the mango mousse with strawberry coulis and phirni – described as a pounded rice pudding. (We chose to skip the gajar ka halwa – a warm carrot pudding. Seemed too healthy to be a dessert.)

The mousse was light and fruity and not too sweet. The phirni, garnished with sultans and cashews, differed from the traditional Indian rice pudding in that, indeed, the rice was ground before cooking, giving it a texture quite like 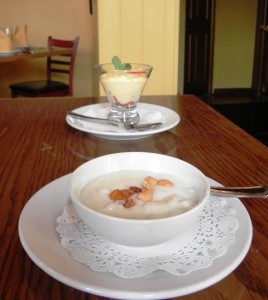 polenta or farina.  Both very tasty.

Would we go again? You bet! Next time maybe the turkey meatballs in saffron-infused kashmiri sauce. Or the free range lamb stewed in creamy mint cilantro sauce. Or jumbo shrimp in a pomegranate powder and hung yogurt marinade, tandoor grilled. And of course that soup.

And maybe a Kingfisher beer.