Hi — Kate Shea Kennon guest blogging from the Rye Grill. I originally was naming this post “Rye Grill: Parking with Anguish, Dining with Comfort,” because The Rye Grill’s hospitality began before I even slid into the booth for our first Restaurant Week lunch.

Frantic at the thought of being late for our reservation, I had ditched my car in a precarious parking place. Discussing the situation with the host, he urged me to go back and find another spot, worried that I would get a ticket. “When you come back, your table will be ready,” he assured me, the busy dining room behind him. Despite the passing of what seemed like hours (when you dine in Rye, plan on a little extra time for parking!), I returned and yes, the table was ready. The staff was cheerful and patient. It was a good start to the Hudson Valley Restaurant Week. 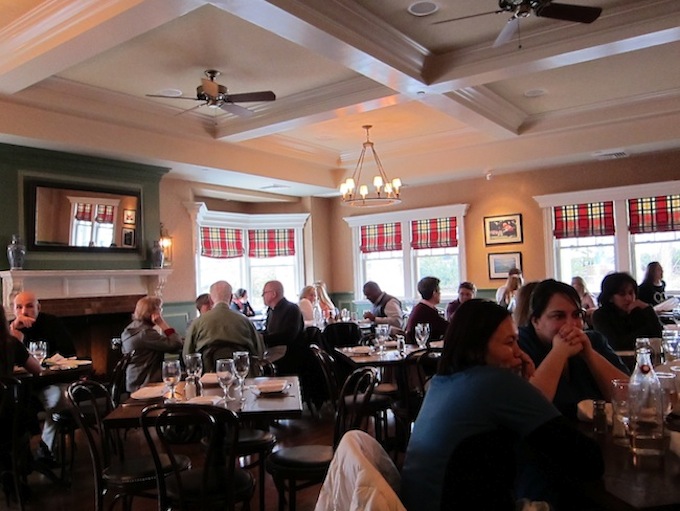 The main dining room of the Rye Grill, one of the many Pearl Restaurant Group’s restaurants here in Westchester, is a large, pleasant room that insistently echoes conversations and pop music hits from Dave Matthews and Inxs. My lunch companion, who frequents the Grill, tells me that the Grill’s bar area is often a quieter and more intimate choice to eat during lunch. Dinner in the bar area? Forget it. Packed. And why wouldn’t it be — the room-length, dark-wood bar is a beauty. The train station is just a “watch the gap” away. No one could resist stopping for the occasional unwind, but today, with the lit fireplace warding off a dank, gray day, the main dining room was just fine especially in the booth areas with the high dividers giving some semblance of privacy.

Bread was brought immediately upon our seating, and although it was unremarkable, it did serve as a vehicle for an excellent butter. Or maybe that was just the hunger talking.

For our first course from the Restaurant Week prix-fixe menu, we had the Fried Calamari and the Chopped Iceberg Salad. The calamari arrived in larger rings than usual, but also were surprisingly more tender than expected; calamari can often be rubbery. 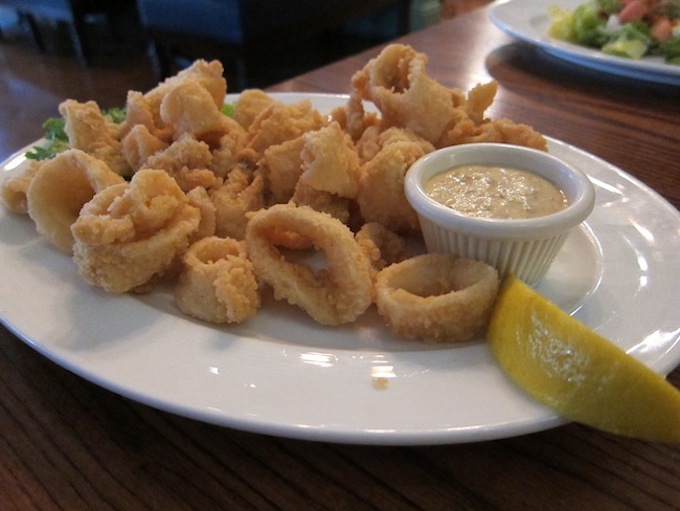 The fry coating was also exceptional, having a distinctive, light puff to what is a pretty common pub offering. I suspect some buttermilk there somewhere. The spicy remoulade was truth in advertising; it had a nice kick to it. It was the kind of dip that disappears faster than the appetizer.

The chopped salad was not for the faint of heart, at least for those who are faint of heart about onions. There were nice bits of bleu cheese and bacon that were rewards for persistence through all the onion. Along with the appetizers, I had a nice Red Tail Ridge, a Finger Lakes Chardonnay, which suggested the promise of summer but couldn’t stand up strong, of course, to the salad and the upcoming meat course. 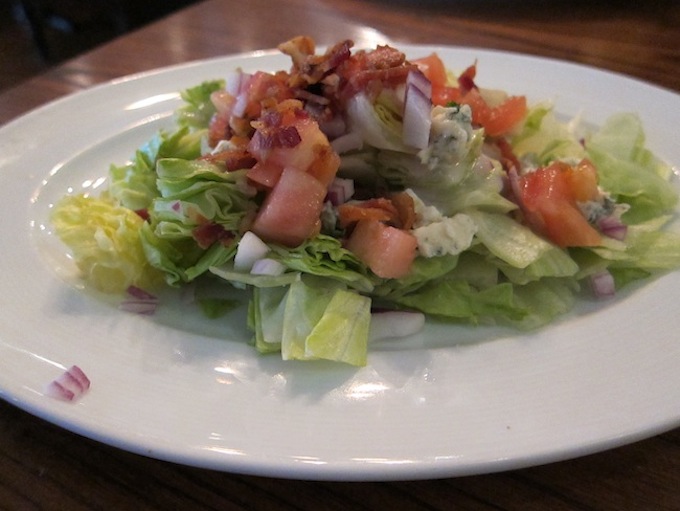 Our two entrees were the Saki Glazed Salmon with Balsamic Rice and Short Rib Sliders with Pepper Cheese and Crispty Onions. Being a grill, I felt obligated to order a grilled meal, but I would have like to have tried the Julienne Vegetable Pizza as well. The Sliders had a generous portion of rib with a good char flavor and there were more onions to be had obviously. 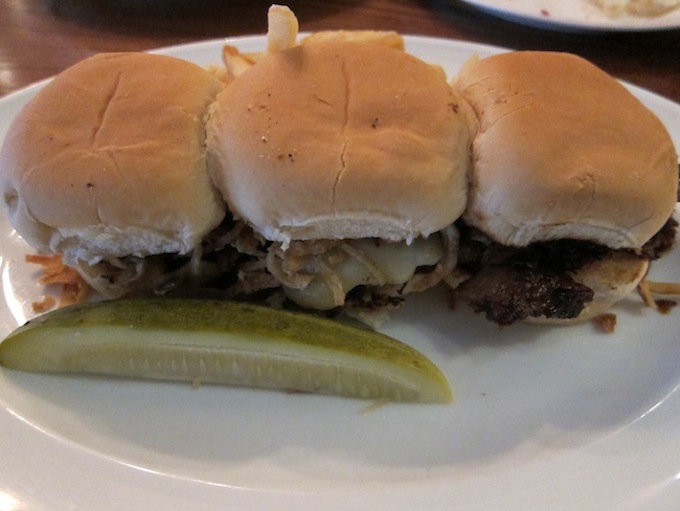 The rolls were a bit of a disappointment with a Wonderbread consistency. I found myself wishing for more substantive roll to be in more balance with the meat. The all-important frites needed salt and warmth.

The salmon dish was the more successful of the two main courses. We ordered the salmon well done, which can be a red cape to an ornery chef who could then send out a burnt dish, but this fish was cooked perfectly, prepared to order but still moist. It had a sake-based sauce that was less sweet than a teriyaki sauce but still a bit strong for the fish. We found ourselves rescuing the fish from the sauce in order to enjoy it on its own, it was so good. 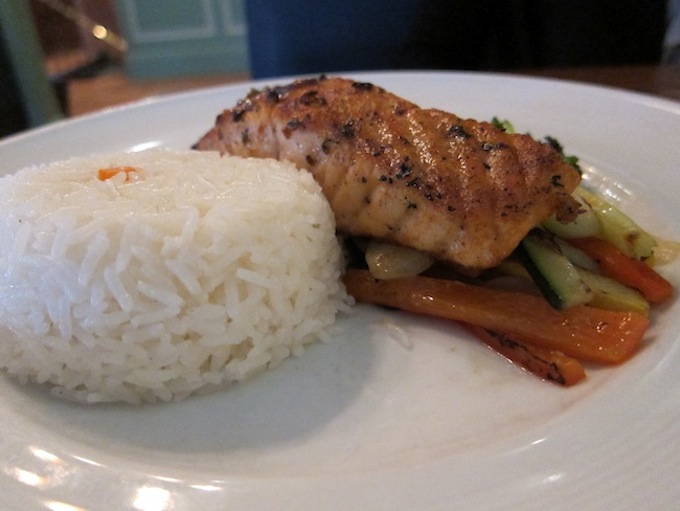 Dessert was two generous portions of white chocolate cheesecake and a brownie sundae. No sorbet for us. That would be just too adult an undertaking. Usually a chocophile, I was surprised to prefer the cheesecake. The brownie looked rich but, as is so often the case, didn’t quite deliver on what’s promised – a decadent cocoa-ness. The cheesecake was light despite its name, and there was a drizzle of caramel that wasn’t overpowering – just enough to tempt you for that one more bite than is what is good for you. 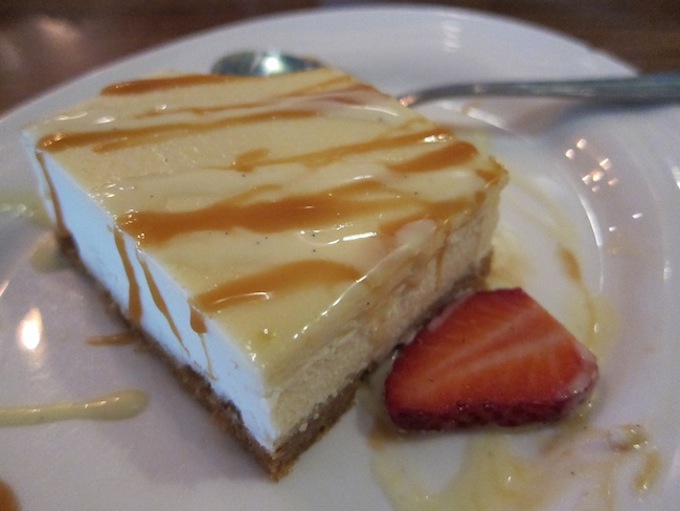 Starting in a lunch room that was loudly packed upon our arrival, we finished in a hush with only the stroller set remaining – all young charges apparently sleeping. The fire glowed warmly, and I wanted to linger a bit longer, but Restaurant Week is just beginning, and lunch at the Rye Grill was a super start.