People are reading
You are at:Home»Restaurants»Bird and Bottle Inn in Garrison: Hudson Valley Restaurant Week 2011

Hi, guest blogger Patrice Costa here to tell you about my recent foodie experience.  Along with my husband, John, and good friends, Deb & Michael, we set out for the Bird & Bottle Inn to enjoy a restaurant week dinner.  Just as you would expect, this 250 year old inn is a little off the beaten path in Garrison (we chuckled about the “rough road ahead” sign as we turned onto Old Albany Post Road).  As you enter this charming and picturesque house, you truly sense that you’ve stepped back in time. 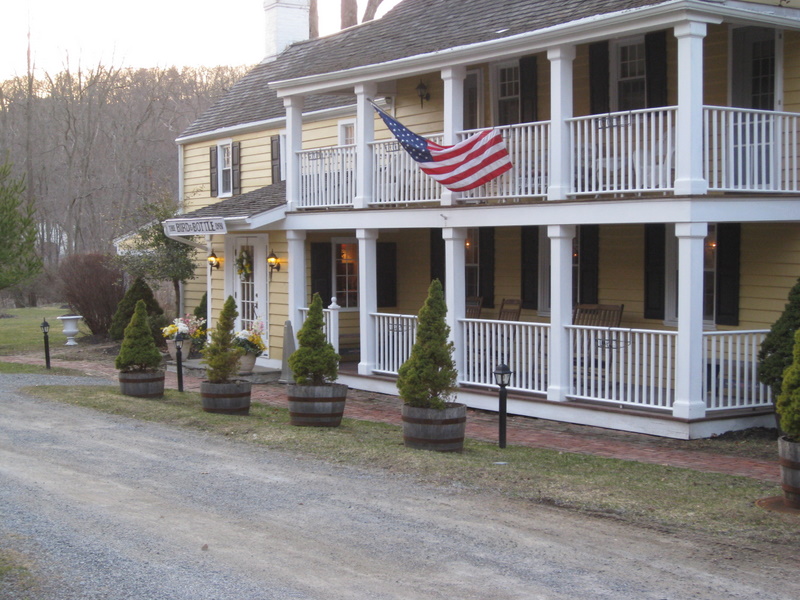 We were greeted warmly and seated immediately.  The dining room was (at the risk of sounding cliché) very quaint and cozy with a fire crackling in the stone fireplace.  We were given only the HVRW menu, and suspect that their regular Winter Prix Fixe menu, normally $54 per person, was not available.  The menu choices were an eclectic mix of flavors — French, Caribbean, Thai and Indian to name a few.  Between all four of us, we managed to cover almost the entire array.

Our meal was off to a very pleasant start with warm rolls and oil & balsamic for dipping as we sipped our prosecco and pre-dinner drinks.  We certainly weren’t in any rush, but the service was a little slow in taking our orders and getting out our appetizers.  Deb and Michael enjoyed the French Onion Soup with apples, brioche croutons, melted Gruyere cheese.  It was served in a small rustic pewter pot and the cheese was wonderfully browned and melty.  Michael, being the table connoisseur of onion soup, liked the unexpected sweetness of the apples, but I found it to be too sugary for my taste . 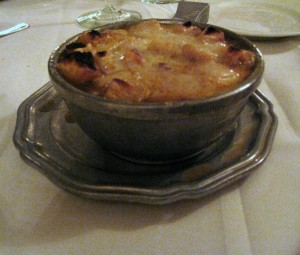 I decided on the Pad Thai Soup with coconut broth, Indian curry spices, roast peppers and was happily surprised that it was not spicy but flavorful with a perfect amount of noodles. My husband loved the interesting addition of mango in the Seafood Salad of King crab, calamari, shrimp, mango and coconut which was prepared with a light creamy dressing. 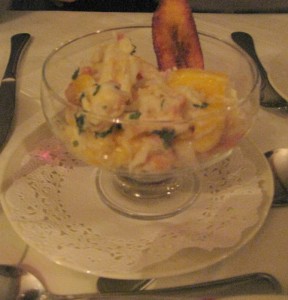 For the entrées, Deb and I both had the Red Wine BBQ Salmon with tomato and avocado salad, red and green cabbage slaw, spiced cornbread pudding and agreed that the fish was moist and perfectly cooked.  I liked the creative take on barbecue with the cornbread (actually more like a soft polenta), coleslaw and avocado, but we thought it was odd to have hot and cold items together on the plate. 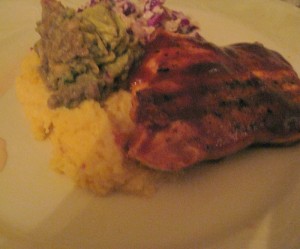 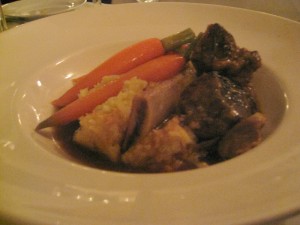 John was impressed with the generous portion for the Cherry wood Smoked Pork Chop, maple-bourbon glaze, potato hash, sautéed broccoli but thought it was too dry.  It could have used more glaze and less of the unexpected spicy sauce that was drizzled on top. 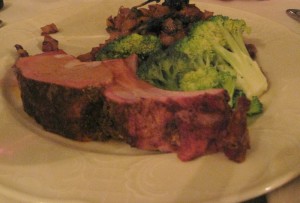 Although not ordered, the Caribbean Spiced Airline Chicken Breast, fried plantains, grilled bok choy was the most intriguing menu item and sparked a lively conversation as to what the term “airline” meant.  We were happy when our neighboring table was told it was the cut of chicken breast with just the drum part of the wing attached (and it looked delicious when it was served to another table close to us). 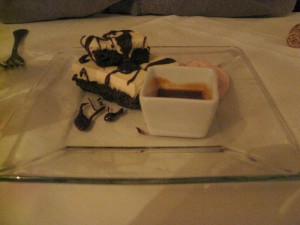 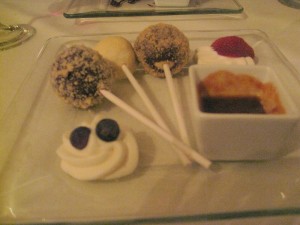 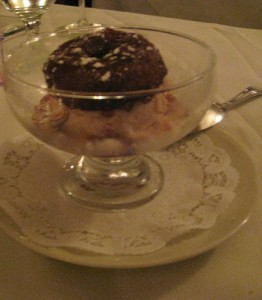 The clear favorite was Michael’s apple fritter which, as he so eloquently described, “was fried to ‘fritteration’ perfection.”

The evening wasn’t complete until our gracious innkeeper, Elaine, came by to chat (she had been very visible in the dining room throughout the evening).

Our conversation bounced from the structure of the beautiful old building to the HVRW menu.  We found out that for the Spring menu they will be changing to an a la carte format and that some of the items we just sampled may be included.

On the way out, I just couldn’t resist asking Elaine about her most interesting guest at the inn – Emily Warren, the 100 year old spirit that is said to show up from time to time.  Elaine was very animated as she told us stories of guest encounters and showed us pictures of strange circles of light and wisps of smoke purported to be Emily’s “energy”.  I have to say that I left the inn with more than a few goosebumps.