Sharon Pickett here again. For my next HVRW assignment, my dining companion and I decided to head to Goldfish Oyster Bar and Restaurant in Ossining.  The location was a familiar one to us, having lived in the neighborhood for more years than we’d care to admit to. 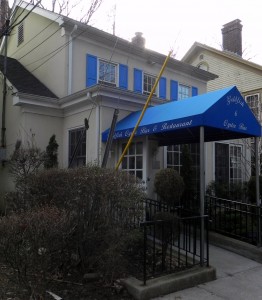 The building housing Goldfish is rumored to at one time been a brothel, but it is certain that it was a speakeasy. During Prohibition, liquor was smuggled from riverboats anchoring in the nearby Hudson River through a tunnel that ended at a trap door in the floor of this old clapboard structure. How’s that for a history lesson!

We arrived somewhat early on Friday to find the house packed. We were offered a table right next to the piano player which we declined and were graciously ushered to a quieter table upstairs. 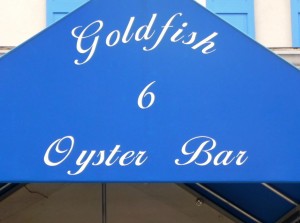 As mentioned, the restaurant is a two story affair – two smallish dining rooms, an attractive bar and a semi-open kitchen on the first floor, and a large dining room upstairs that is partially open to the area below.

And, as with most multi-level restaurants without dumbwaiters or elevators, a challenge to even the most skilled wait staff. 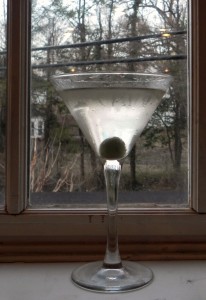 Goldfish’s regular (non-HVRW) offerings consist of a Byzantine labyrinth of prix fixe menus with a three course, $16.00 menu on Monday through Wednesday, a four course extravaganza for $21.00 on Thursday, a more deluxe four course meal for $35.00 on Fridays and finally a four course, again rather grand $21.00 prix fixe meal on Sundays.

PLUS – a standard menu of appetizers and entrees. Got all that?

So with this panoply of menu offerings, how is it that for HVRW, Goldfish offered just three appetizers, three entrees and yes, three desserts?  We were puzzled.

It being the weekend, we started off with a cocktail, a martini to be exact.  Companion’s being gin (he’s the purist) mine beingvodka. And didn’t our waiter negotiate those stairs with two cocktails filled to the brim – without spilling a drop. Bravo! 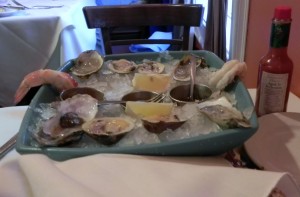 Back to the menu. With all the dishes this kitchen seemed ready and able to prepare, why did they offer what they did in order to best showcase the bounty of the Hudson Valley?

Appetizers were appropriate enough – a chilled seafood cocktail (selected by my companion) lobster bisque, and a crab cake (my selection).

But the entrees – seared tuna wrapped in crispy wonton (sounded O.K. – my selection) seared filet mignon (at a fish restaurant? O.K. maybe not everyone is a pescavore – his selection) and roasted Chilean sea bass — a species that is severely overfished and is rated “Avoid” by the Monterey Bay Aquarium’s Seafood Watch program — seemed rather puzzling. 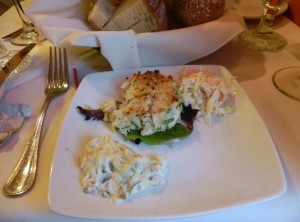 We placed our order and were promptly delivered a basket of nicely crafted warm breads and rolls. A promising start.

Soon after arrived our appetizers. The seafood cocktail consisted of two shrimp, four clams (littleneck) and four oysters (bluepoint), attractively presented over crushed ice in a lovely baby blue bowl. Requests for Tabasco and horseradish were promptly filled. The seafood was icy cold and swimmingly fresh.

The crab cake was fine as well. Meaty, with shreds of tarragon and little filler. (Oops! I started eating before I remembered to snap a photo). The tarragon in the crab was complimented by the same herb in the accompanying remoulade.

The filet was soft and lacking a true beef flavor and what was described as a “garlic port wine reduction” was salty and off-tasting, masking the other tastes on the plate.

The seared tuna disappointed as well. It was neither warm nor cool, but tepid, making it hard to tell the chef’s intent with the dish. Bok choy accompanied the tuna. When served as a vegetable side dish, bok choy is best served 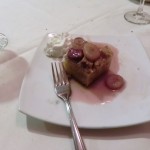 lightly streamed while this iteration seemed to be boiled within an inch of its life and then doused with a cloyingly sweet soy glaze. (sorry, the photo of this dish turned out so horrid I couldn’t post it).

My meal picked up a bit with the white chocolate bread puddingwith strawberries and bananas, while my companion’s meal continued its downward slide with something he called “Let’s clean out the refrigerator and put it on a plate and call it dessert.” He ordered the dessert sampler. See the accompanying photo below. 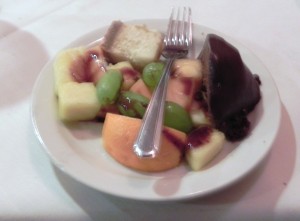 To put this meal in perspective, I don’t think this meal (or the inclusion of these menu items on a HVRW offering) was a good representation of this kitchen’s capabilities or talents.

Do give Goldfish a try. Ask questions of the very knowledgeable wait staff. And stick to what this restaurant seems to do best – grilled, simply sauced fish (not Chilean sea bass), cold seafood cocktails and the often bargain prix fixe menus – if you can figure them out.

P.S. Goldfish Oyster Bar and Restaurant is located in a residential neighborhood behind the Arcadian Shopping Center. Parking can be tricky. The restaurant has a private lot on the right hand side of Rockledge Avenue as you enter from Route 9.